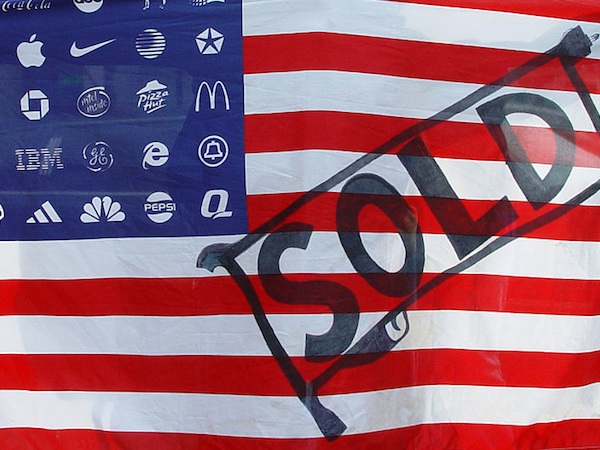 The Pledge of Corporate Allegiance?

Witch hunter Joseph McCarthy would be proud of ALEC. So proud! Like McCarthy, the shadowy corporate lobby group wants oaths of allegiance.

This summer, ALEC (the sham that calls itself the American Legislative Exchange Council) proposed asking the legislators it appoints as state directors to raise their right wings and swear: “I will act with care and loyalty and put the interests of the organization first.”

ALEC first. Before the lawmaker’s constituents. Before the interests of the lawmaker’s state. Before the constitution of the United States. ALEC’s proposal would require lawmakers to forsake their oaths of office and swear fidelity instead to the organization that wines, dines, indulges and indoctrinates them with buckets full of corporate cash. The idea of an ALEC loyalty oath clarifies the allegiance of the 1,810 state legislators that ALEC claims as members. They see their primary duty as serving corporations, specifically the corporations that give millions to ALEC.

ALEC claims it didn’t adopt the loyalty oath. But citizens have no way of knowing if that’s true because ALEC’s meetings are clandestine affairs, no reporters or citizens allowed. Documents leaked to The Guardian reveal that ALEC proposed the oath at its August meeting. It’s contained in a massive list of duties for state legislative coordinators, a list so long that it’s not clear when coordinators would have time to work for the citizens of their state, a list complete with an agreement signature sheet where the coordinator would swear to complete the work for ALEC.

ALEC (All Legislation Enhancing Corporations) is a secretive corporate front group that solicits money from corporations and spends it flying lawmaker-members to conferences in swanky settings where they help corporate members write legislation to fatten the corporate bottom line. The lawmakers take ALEC legislation back to their states, where they often introduce it word-for-corporate-written-word, sometimes with the ALEC logo still affixed to the pages.

This process effectively eliminates those pesky voters from lawmaking. ALEC is the middleman bringing corporations and lawmakers together, facilitating a process in which corporations craft legislation for themselves, and then lawmakers—all fat and happy on the corporate dime—take that legislation home and get it passed. No citizen input needed, thank you.

“Stand your ground” laws are an ALEC achievement. These shoot-first-ask-questions-later decrees create deadly situations like the one in which George Zimmerman walked free after shooting unarmed teenager Trayvon Martin.

Shoot-first laws are great for gun manufacturers, assuring no liability for hotheads who rashly use their products. Florida’s shoot-first law wasn’t so great for Trayvon Martin. And, as it turns out, shoot-first  wasn’t great for ALEC, which lost about 400 lawmaker members and at least 40 significant corporate sponsors as a result of publicity linking ALEC to the shoot-first  laws and other legislation detrimental to citizens, such as ALEC’s voter suppression legislation requiring citizens to perform backflips through flaming hoops before exercising their most basic right in a democracy.

ALEC documents just leaked to The Guardian newspaper reveal the shadow group’s latest campaign to enrich corporate members at the expense of citizens. ALEC wants homeowners who have bought and installed solar panels or wind turbines to pay utility companies to accept the excess electricity they generate.

Such legislation is the reason ALEC needs that loyalty oath—to get lawmakers to swear to serve corporations and ignore constituents.

ALEC met again last week. Maybe it adopted the loyalty oath then. Again, the public doesn’t know because ALEC excluded reporters and citizens from its work sessions. It allowed reporters only to attend speeches by Republican publicity-seekers such as Ted Cruz, the Texas senator who insisted on shutting down the government for 16 days in a failed attempt to kill the Affordable Care Act and deny millions health insurance.

Cruz slandered Sen. Dick Durbin (D-Ill.), who conducted hearings earlier this year on ALEC’s role in propagating shoot-first laws. In a warped attempt to be funny, Cruz attributed to Sen. Durbin a frightening McCarthy line. Cruz told the ALEC members: “I was just at the Capitol and I was asked to pass along an inquiry from Sen. Durbin: ‘Are you now or have you ever been a member of ALEC?’ ”

Cruz is wrong. Americans should be asking that question because they can’t be sure their state lawmakers haven’t sworn first allegiance to ALEC and thus foresworn their duty to first serve the citizens of their states and uphold the constitution.

ALEC claims 1,810 state lawmakers hand over—or get their state taxpayers to pay for them—$100 ALEC membership dues. But that figure seems questionable. For example, ALEC claims every single legislator in Iowa—all 150 of them, Democrats included—and every single legislator in South Dakota—all 105 of them, Democrats included—are members. This is an organization that describes its mission as advancing free markets, limited government and federalism. Those are the priorities of the Tea Party, not Democrats.

While some organizations have tried to compile ALEC membership lists based on leaked ALEC documents, some individual lawmakers on those lists, particularly Democrats, have publicly denied any association with ALEC.

Voters have a right to know where the allegiance of their lawmakers’ lies. They should be asking if their elected representatives have sworn to serve ALEC first. And if so, those should be the first to go.