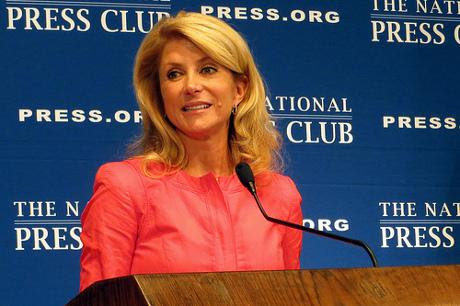 As women's rights regress due to a rise in conservative values and austerity measures, Republicans rightly fear a loss of support. (Alan Kotok/Flickr/Creative Commons).

Republicans (Still) Have a ‘Female Problem’

In the 2014 midterms, women will be the battleground. And one party has a leg up.

Ron Bonjean, a GOP strategist, acknowledges that 'the 2012 election showed that we have problems with female issues. There is a widespread recognition by Republican strategists that this needs to change—as soon as possible.'

Now that it’s 2014, American political analysts, strategists, and operatives are revving up for the November midterm elections.  High on the Republican agenda is the goal of convincing women to counter President Obama and vote for their congressional and gubernatorial candidates.

Usually, the opposition party has the advantage in the non-presidential midterm elections. But in this instance Democrats may in fact have greater appeal, especially among young, minority and low-income women voters. In 2012, President Obama enjoyed an 18 point gender gap, according to exit polls.

Now, Democratic Party operatives are trying to mobilize even more women voters, especially the minority women who have so strongly supported their platform. They are casting women in starring roles and hoping that by running high-profile female candidates, they will take back important governor's mansions and keep their fragile majority in the Senate. One of their stars, for example, is the famous Wendy Davis of Texas, who captured the nation’s attention when she spoke for 11 hours, standing the whole time in pink running shoes, in order to prevent a vote on an anti-abortion law. She is now running for governor. Her candidacy is a long-shot, but her war chest is bulging with donations from all over the nation precisely because she championed  women’s reproductive rights in the heart of the Republican South.

Democrats in general are associated with defending women’s reproductive health care and choices about abortion. Republicans, by contrast, have done just the opposite. Right now there are 700 bills sponsored by Republicans in state legislatures, all intended to restrict women’s access to contraception and abortion. Determined to repeal both Obama’s Affordable Care Act and women’s reproduction rights, Republicans have flooded the courts with efforts to accomplish both. As a result, the Supreme Court recently announced that it will decide whether employers can refuse to provide contraceptive coverage, as is required by Obama’s new health coverage. The court’s willingness to hear arguments will once again draw the nation’s attention to the issue of contraception and abortion. If the court rules against the President’s health plan, according to Professor Carole Joffe, a sociologist and expert on women’s reproduction health and policy,  “millions of women will lose access to this essential healthcare service.”

Another reason women might vote for Democrats is that access to abortion has gradually disappeared in many parts of the United States.  As Joffe points out, “Because of very severe restrictions put in place by numerous state legislatures, such as requiring clinics to spend hundreds of thousands of dollars on physical plant upgrades that have no impact on patient safety, and requiring clinic doctors to have privileges at local hospitals, many clinics have already had to close.” So many clinics have closed in Texas, she notes, that “some women on the border are hundreds of miles from any abortion facility. A number of states are down to one clinic, and their status is in the hands of the courts. 2014 will likely see even more clinic closures.”

But it’s not just women’s reproductive rights that could persuade women to cast their votes for Democrats. Single mothers and other women among the 99% have watched as Republicans have slashed welfare, social services, and education in the name of taming government spending. They have heard Republicans describe them as shiftless and lazy and watched them vote to cut the very food stamps that women—living on the edge, often working several jobs–need to keep their families together.

In short, if middle class and poor women are paying attention and turn out to vote—and that’s always a big “if”—they may very well vote against Republicans who have opposed reproductive rights, fought to repeal health care for the uninsured, and sought to cut food stamps.

In 2008 and 2012, President Obama won two presidential elections in Virginia—once viewed as a reliably Republican state—by a tiny margin. More recently, Terry McAuliffe, a Democrat, won the Virginia governor’s race by bombarding the public with messages that highlighted Republican efforts to ban contraception and abortion. In the end, he beat his Republican candidate among unmarried women voters by 42 percentage points, according to exit polling.

Republicans, for their part, are well aware of their “female” troubles. How do you run a campaign on a record of trying to unravel the safety net, chip away at women’s reproductive rights and cut food stamps to hungry families? Ron Bonjean, a GOP strategist, acknowledges that “the 2012 election showed that we have problems with female issues. There is a widespread recognition by Republican strategists that this needs to change—as soon as possible.”  Women’s advocacy groups agree. They know that women’s support for pay equity and health care in particular, gives Democrats a tremendous advantage. “It's a deep problem for the Republicans,” says Ilyse Hogue, president of NARAL Pro-Choice America.

Although a flurry of media stories have described women buying guns for self-protection, Republicans may also lose some women’s votes due to their growing support of serious gun control. A recent poll revealed that the random massacre in 2012 of children at Sandy Hook Elementary School in Connecticut has caused some women to re-think their beliefs about gun control. Democratic women often skip the midterm elections, but the poll revealed “that a subset of women voters who usually don't vote in midterm elections are more likely to vote in 2014 on the issue of gun violence.”

“As we approach the 2014 congressional elections,” says Democratic pollster Diane Feldman, “the question will be to what degree do single women, lower income women, and persons of color participate, since that's the Democratic edge,” she said. “And this is an issue that can encourage them to participate.”

The Republicans know this, and are seriously worried about how closely they are allied to the powerful National Rifle Association. Rep. Steve LaTourette (Ohio), a somewhat moderate leader in the Republican Party, recently warned his party that their refusal to support gun control could cause them to lose votes. “If the GOP is seen as being in the pocket of the NRA,” he said, “it could cost the party big with women in future elections.”

He’s right. The Republican Party, now dominated by the political agenda of Tea Party extremists in their party, as well as their threats to unseat moderate Republicans, has become associated with a certain wacko fringe political element, which is particularly unsettling to some women.  When a Republican uses the words “legitimate rape” to describe how a woman’s body would “naturally” reject the sperm of a rapist,  eyes roll and Republicans lose even more credibility among women voters.

“If Republicans really cared about women, says a former director of Obama’s last political campaign, “they would promote policies that encourage family-friendly fairness in the workplace. Many pregnant women in America receive no protection if they need physical accommodations during their pregnancy, and can be fired if they cannot stand all day during their shift or lift heavy items. This disproportionally affects low-income women who have service jobs.” As does child care and paid parental leave, which neither party wants to address.

Republicans have a tough road ahead of them. They could, of course, promise to raise the minimum wage, expand training programs for women, create affordable housing, endorse pay equity and ensure that women earn more than 77 percent of men’s wages. But none of this is likely to happen.

Still, not all Republicans are running scared. A recent poll showed that former Sec. of State Hillary Clinton is deadlocked in a hypothetical presidential race in 2016 with New Jersey’s Republican Governor, Chris Christie. “He performs particularly well among independents, winning nearly six in 10 in that key group,” CNN Polling Director Keating Holland said about Christie. “He also wins a majority of suburbanites and older voters, something that no other GOP hopeful (that was) tested was able to do against Clinton.”

But these are not the people who put President Obama in office. And if more media stories surface about his bullying behaviour, Christie may end up reminding too many women of their first husbands.

Republicans still have a serious “female” problem. Democrats have already staked out a winning strategy—to raise the minimum wage, an appealing policy that cuts across most of the middle class, and certainly reaches those who work at subsistence wages in service jobs. So, unless Democrats fail to mobilize disgruntled women voters, they may have found a winning strategy to sweep the midterm elections.

The Republican’s problem is clear: it’s difficult to vilify women, immigrants, minorities and low-income citizens for eight years and then ask them to elect you to political office. That, in fact, is the definition of true chutzpah.

Reprinted with permission from OpenDemocracy.net

Ruth Rosen, a former columnist for the Los Angeles Times and San Francisco Chronicle, is a pioneering professor of gender and society and an award-winning journalist whose most recent book is The World Split Open: How the Modern Women's Movement Changed America. www. ruthrosen.org