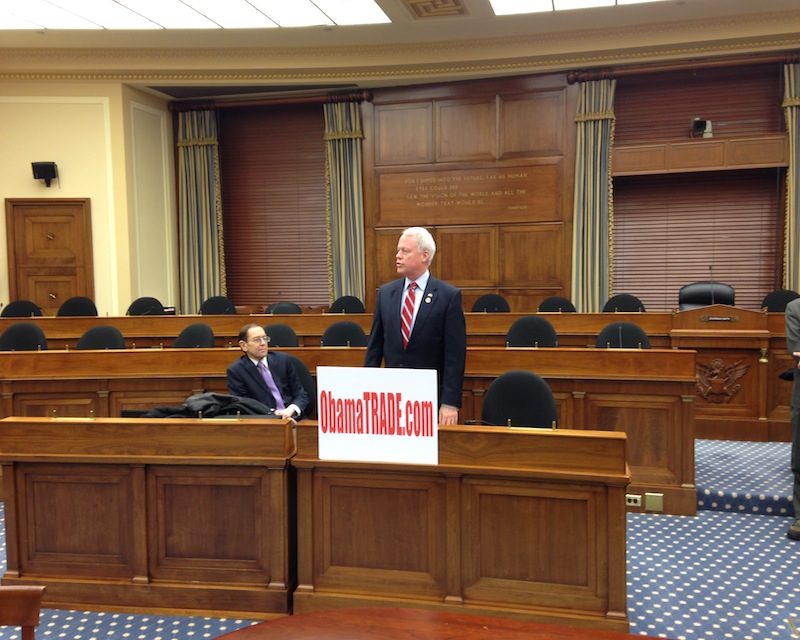 Hated on the Left, the TPP Draws Conservative Foes

Most of the TPP critiques were on constitutional grounds: Speakers condemned how fast-track delegates trade negotiating authority to the executive branch and, to a lesser extent, how TPP’s extreme investor protections chip away at American sovereignty by allowing corporations to sue governments in third-party courts. Mixed in with this criticism, though, was a healthy dose of anti-Obama rancor.

If “Obamatrade” catches on as a right-wing rallying cry against the Trans-Pacific Partnership (TPP)—a trade agreement covering the Pacific Rim economies of Australia, Japan, Malaysia, among others—it will probably have something to do with a sparsely attended press conference on Tuesday in the House Science Committee hearing room. That’s where the American Jobs Alliance and the United States Business and Industry Council—pro-business groups wary of trade’s impact on America’s national interests—joined with Tea Party Nation and the socially conservative Eagle Forum to rail against the TPP and President Obama’s support for “fast-tracking” the measure. The legislative procedure would prevent Congress from amending the agreement once it’s completed by international negotiators. Without fast-track, Congress is considered unlikely to approve the deal in its current form.

On Wednesday, Senate Majority Leader Harry Reid came out against the existing fast-track bill, but that doesn’t quite mean it’s dead. A “yes” vote in the House could put enough pressure on the Senate to take action or legislators could choose to craft a gentler version of the bill that appeals to Reid—one that allows more time for debate, for example.

Most opposition to the TPP has come from the organized Left, which worries that “NAFTA on steroids” will undermine key environmental and health protections and hasten the flight of good-paying jobs abroad. Earlier this week, a coalition of more than 550 different labor unions, environmental groups and consumer advocacy organizations condemned fast-track in a letter to Congress. That’s in addition to Reid and the 151 House Democrats who came out against the procedure in November. By contrast, only 23 House Republicans have done so.

But the Obamatraders hope to light a fire under Congressional Republicans. Tuesday’s proceedings were transmitted live on a conference call to several Tea Party groups and local affiliates of the 9/12 Project—an organization founded by Glenn Beck and named for the moment of patriotic unity that followed September 11, 2001.

From the beginning of the conference, it was clear the coalition is targeting voters and elected officials whose politics vary substantially from its temporary allies on the Left. “Before we get started this afternoon, I thought it might be appropriate that we take a moment of silence to honor a friend that has passed away,” Tea Party Nation president Judson Phillips told the audience.

For a fleeting moment, I think he is about to pay homage to Pete Seeger, the iconic communist folk artist who passed away earlier in the day. But then Phillips finishes the sentence.

“Global warming,” he says, to laughter.

Most of the TPP critiques were on constitutional grounds: Speakers condemned how fast-track delegates trade negotiating authority to the executive branch and, to a lesser extent, how TPP’s extreme investor protections chip away at American sovereignty by allowing corporations to sue governments in third-party courts. Mixed in with this criticism, though, was a healthy dose of anti-Obama rancor.

Rep. Paul Broun (R-Ga.), the only congressman in attendance, stressed that he’s not against free trade in theory. Nor is he actually opposed to the TPP, as he clarified when asked by In These Times. Broun, in fact, has voted for four separate FTAs with Colombia, Panama, Peru and South Korea.

“As an original intent constitutionalist, I believe very firmly in that idea of free and open trade,” Broun said. “But fast-track authority is a problem, particularly with this President. We’ve seen him over and over again make promises … someone who has not been truthful certainly should not have this fast-track authority.”

Glyn Wright, executive director of the Eagle Forum, the organization founded by Phyllis Schlafly and best known for fighting the Equal Rights Amendment in the 1970s, shared those concerns. But her reservations about the TPP have more to do with her Christian faith than her lack of faith in Obama.

“Some of the countries in this partnership are notorious for their prosecution of Christians,” Wright said. “In Brunei, Malaysia and Vietnam, Christians and clergy are harassed at every turn, spies attend almost every Christian gathering, and Brunei’s constitution even states that the religion of Brunei shall be the Muslim religion—which means that Islamic sharia law supersedes all other law. … Why are we looking to merge our economies with countries that represent the absolute antithesis of the American way?”

Taking another tack, Ellis of the American Jobs Alliance, who has an aversion to multinational corporations that can come off as vaguely anti-capitalist at times, argued that this isn’t even about “free trade.”

“This is essentially protected markets granting monopoly power to certain large corporations—Mousewitz, Disney—so that Mickey Mouse will live forever,” Ellis tells In These Times, in a reference to the TPP’s intellectual property chapter. “It’s managed trade to grant privileges to the corporatist insiders who have lobbyists, who are sitting at the negotiating table and have access.”

Within the larger scope of the conservative movement, or of business lobbyist circles, the coalition represents a small minority with limited political power. Despite its portentous title, the U.S. Business and Industry Council is no Chamber of Commerce—it represents companies committed to the “national interest,” not the agenda of large multinationals intent on maximizing global profits. The Eagle Forum, a couple of decades removed from its heyday, is no Heritage Foundation. The latter, which maintains considerable sway over House Republicans, has praised the TPP and other free trade agreements. (Heritage did not respond to a request for comment on this story.)

TPP opponents, though, will take support from wherever they can get it. Basic arithmetic dictates that blocking fast-track requires a substantial chunk of Republican votes in the House.

“Opposition to the TPP is growing daily, as more people are learning about its disastrous consequences,” says Rep. Alan Grayson (D-Fla.), who has helped lead Democratic opposition to the deal. “Whether you’re a Democrat or a Republican, a liberal or a conservative, it’s clear that the TPP is [a] sell-out to foreign corporations that will gut our manufacturing base, and make our trade deficits soar.”

Mark Pocan (D-Wis.), who has rallied fellow first-term Democrats against the deal, says the space of convergence doesn’t even have to be as broad as that.

“While Democrats and Republicans may approach trade issues from different perspectives, we should all be opposed to abdicating our Constitutional power to oversee foreign trade deals,” he says.