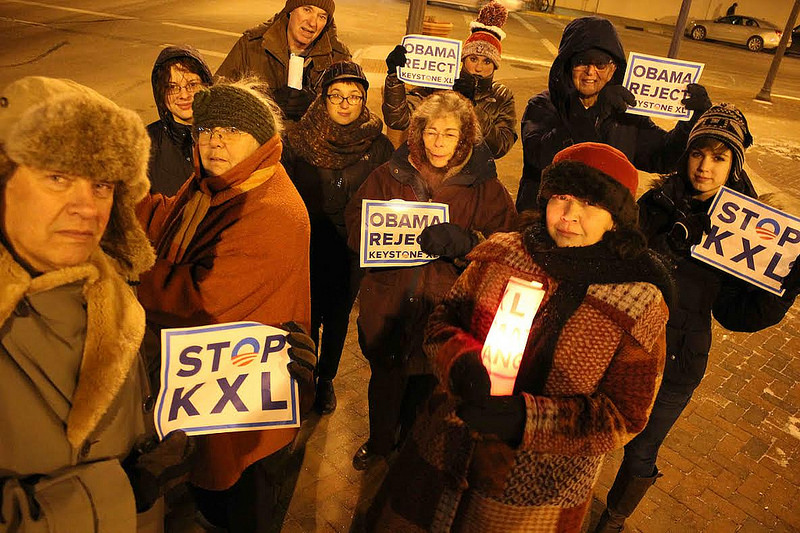 The two-year-plus political drama is nearing its climax.

When it comes to the KXL, Obama has generally held his cards very close. In a speech last June at Georgetown University, he offered a now-famous criterion for approval: Does the pipeline “significantly exacerbate” greenhouse gas emissions?

On Monday night, thousands rallied across the country against construction of the Keystone XL pipeline—the latest show of strength for an environmental movement that’s reaching the home stretch after more than two years of successfully delaying the project. The next three months will determine whether the Keystone project is greenlit or killed.

Since TransCanada’s proposed pipeline crosses the U.S.-Canada border, it requires a presidential permit. And with the release of the State Department’s final environmental impact statement on the Keystone XL on Friday, President Obama will soon, at long last, be forced to make a decision about a pipeline that he pledged to approve “only if it does not significantly exacerbate the problem of carbon pollution.”

The impact statement offers frustratingly few clues into the potential fate of the Keystone XL. On the one hand, the State Department all but acknowledged that the daily transport of more than 800,000 barrels of mostly heavy crude oil would result in new carbon emissions and accelerate climate change—a point the anti-KXL camp finds dazzlingly obvious. On the other hand, the impact statement suggested that Alberta’s oil sands will be extracted and shipped to export markets with or without Keystone XL—in all likelihood, via a combination of rail and other pipelines like Enbridge’s Alberta Clipper, which stretches from southeastern Alberta to Superior, Wisconsin. (The Obama administration quietly issued a permit for that project in August 2009.)

Eight federal agencies have just under 90 days to comment on whether or not construction is in the “national interest” before Secretary of State John Kerry announces the administration’s final judgment.

As Washington deliberates, green groups are sending a message from the streets. Hundreds of people gathered in New York’s Union Square yesterday for a rally where 350.org co-founder Bill McKibben and Clayton Thomas-Muller of Idle No More, an indigenous-led environmental justice movement in Canada, called on President Obama to reject the pipeline. Crowds held similar protest vigils in Chicago, Los Angeles, Lincoln, Nebraska—located only about fifty miles away from the proposed pipeline route—and other cities. Meanwhile, in President Obama’s backyard, more than two hundred protesters braved the frigid weather to rally in front of a brightly lit White House and a massive inflatable KXL replica reading, “Pipeline President or Climate Champion?”

“Our generation must fight for our planet,” Rev. Lennox Yearwood, president of the Hip Hop Caucus, told the boisterous crowd. “This is our lunch-counter moment.”

Like many others in attendance, Susan Stillman, 60, came out to the White House because she worries that KXL will spur more development of the oil-rich tar sands in Alberta.

The broad coalition that helped organize Monday’s protests in 48 states—the Rainforest Action Network, the Sierra Club, Credo Action, 350.org and the Natural Resources Defense Council, among many others—is further proof of how strongly the Keystone XL battle has served to unify what’s often been a fragmented environmental movement.

“Sometimes movements operate in silos,” Reverend Yearwood of the Hip Hop Caucus tells In These Times. “You have fracking here, you have mountaintop removal over here, environmental justice here, the Lakota [opposing the pipeline] in Pine Ridge [South Dakota] over here. This is an issue where we have come together and it has broke down some of those silos, even within in our own movement.”

“Clearly, it’s not just about this one pipeline,” Yearwood continues. “It really is about: Are we going to be moving for cleaner energy, or do we continue to extract fossil fuels, which we know creates global warming and climate change?”

Monday’s crowds were also a preview of the greater numbers that have pledged to turn out if Secretary Kerry concludes that the pipeline would, in fact, contribute to the “national interest.” More than 77,000 people have committed to take part in non-violent civil disobedience if the KXL is approved. The green groups have already selected several protest sites across the nation: State Department and Environmental Protection Agency offices in Washington, the TransCanada headquarters in Houston, and various branches of TDBank, one of the Canadian energy firm’s largest shareholders.

“We think over the next 90 days, that [77,000] number is going to increase quite a bit,” says Elijah Zarlin, CREDO’s Senior Campaign Manager. “The message will be that it’s the last minute for President Obama to make good on his promise to fight climate change and make good on the test he set for Keystone XL.”

When it comes to the KXL, Obama has generally held his cards very close. In a speech last June at Georgetown University, he offered a now-famous criterion for approval: Does the pipeline “significantly exacerbate” greenhouse gas emissions? The State Department report offers an ambiguous answer to that question, shedding little light on the president’s likely decision. But in a Fox News interview that aired Monday night, the President offered a harsh rebuke of at least a portion of the environmental statement that may hint at where he’s leaning.

“It’s not 42,000,” Obama told Bill O’Reilly, when the host cited State Department projections about how many jobs Keystone would create. “That’s not correct. It’s a couple thousand to build the pipeline.”

In a mid-term-election year, the president may choose to base at least part of his decision on public opinion. That provides even more impetus for activists to keep the pressure up, as polls strongly suggest the protest movement has helped shift public opinion against the pipeline. About 56 percent of Americans say they support Keystone XL, with 41 percent opposed, according to new poll conducted in a November-December 2013 for USA Today. That may not be the numbers the movement is aiming for, but it marks growing opposition since March 2013, when a Pew study found a 66-23 split.

Zarlin of CREDO Action acknowledges that “there’s been a lot of disappointment” when it comes to Obama’s energy and environmental policies. But he’s holding out hope that the president’s well-documented desire to craft a legacy on climate issues —along with the State Department’s focus on “national interest”—will eventually trump the administration’s reverence for Big Oil.

“When you’re talking about protecting the citizens of this country from climate change,” Zarlin says, “it’s quite a defeatist mindset to say, ‘Well, the stuff’s just going to get out of the ground anyway,’ and not say, ‘We’re going to do everything we can to not let our country be used by a foreign oil company to export oil to foreign markets.’ ”