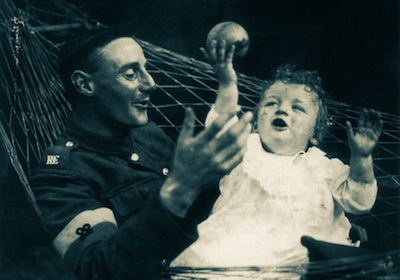 1919: A soldier just home from the Great War meets his daughter for the first time. (Topical Press Agency/Getty Images)

How Will We Remember the First World War?

The centenary of the Great War has sparked some ugly debates in the U.K.

It is estimated that about 37 million people were killed or wounded in the First World War, about 60 percent of them on the Allied side, the rest Germans and their supporters. These are numbers beyond imagining.

The novelist Doris Lessing died last year at 94. She was born in 1919, the year after the First World War ended and the year that a flu epidemic killed several million. The opening chapter of her autobiography, Under My Skin, contains the words, “A war does not end with the Armistice. In 1919, all over a Europe filled with graves, hung miasmas and miseries. … I used to joke that it was the war that had given birth to me, as a defence when weary with the talk about the war that went on—and on—and on. … I used to feel there was something like a dark grey cloud, like poison gas, over my early childhood. ”
There are no more eye-witnesses to the First World War, which began in 1914, so we are in for a centenary year (or perhaps four) of remembering it all at second-, third- and fourth-hand, and listening to some ugly debates. Schoolchildren in the U.K. learn about the causes of the First World War and of the Second—topics often used to introduce young people to the problems of historical truth and interpretation. Michael Gove, our education secretary, has announced that this commemorative year should be spent “battling left- wing myths that belittle Britain,” which are responsible for what he regards as dangerously unpatriotic satires, particularly the 1963 musical Oh! What a Lovely War and the 1989 BBC sitcom Blackadder Goes Forth. His counterpart or “Shadow” in the Labour Party, Tristram Hunt, a well-known historian, has responded angrily that “attempting to position 1918 as a simplistic, nationalistic triumph seems … foolhardy, not least because the very same tensions reemerged to such deadly effect in 1930.”
My parents were children in the First World War, and my father took a boyish interest in the battles and map of Europe they so decisively altered. For me and my sisters, that map hung bleakly there as the backdrop to the war of our own childhood. There were odd relics from that earlier war: sad, silent men we understood to have suffered “shell shock,” to have been driven nearly mad by what they’d seen. There were pretty women in their fifties with no husbands or children, whose fiancés had died. There was the photograph of two teen- age brothers, my mother’s cousins, who, we knew, were killed almost as soon as they got to the front, and who were remembered poignantly as boys fussed over by their parents, who never let them out of the house without a spare pair of socks, in case it rained.
My parents had friends who had been conscientious objectors and went to prison for it, while my grandfather enjoyed his war, riding across Egypt and Palestine as an army doctor with the 2nd Judean Battalion of the Royal Fusiliers.
My generation was brought up on the poetry of Wilfred Owen, Rupert Brooke and Siegfried Sassoon, and its ambiguities: There was excitement inspired by that dreadful war as well as outrage and despair. Doris Lessing’s father was handed a white feather—a public shaming for being a coward—by women who didn’t know he’d been to the trenches and had come home with a wooden leg. He was not the only wounded soldier who spent the rest of his life hopelessly depressed and sour with hatred of those who’d encouraged or obliged young men and boys to join up for a war they felt had achieved nothing for them. The mud, the trenches, the rats that gathered in them, are unforgettable images, endlessly re-enacted in films and on television, and always shocking.
It is estimated that about 37 million people were killed or wounded in the First World War, about 60 percent of them on the Allied side, the rest Germans and their supporters. These are numbers beyond imagining. This year will remind us of the music and the novels and poems and paintings produced in the wake of that war. Several recent books have argued for alternative attributions of blame and heroism, and “lions led by donkeys” is currently being countered by Gove’s extraordinary claim that the Battle of the Somme, during which more than 300,000 young men died, almost a third of them British, should be read henceforth as “a precursor of allied victory” rather as than a calamity.