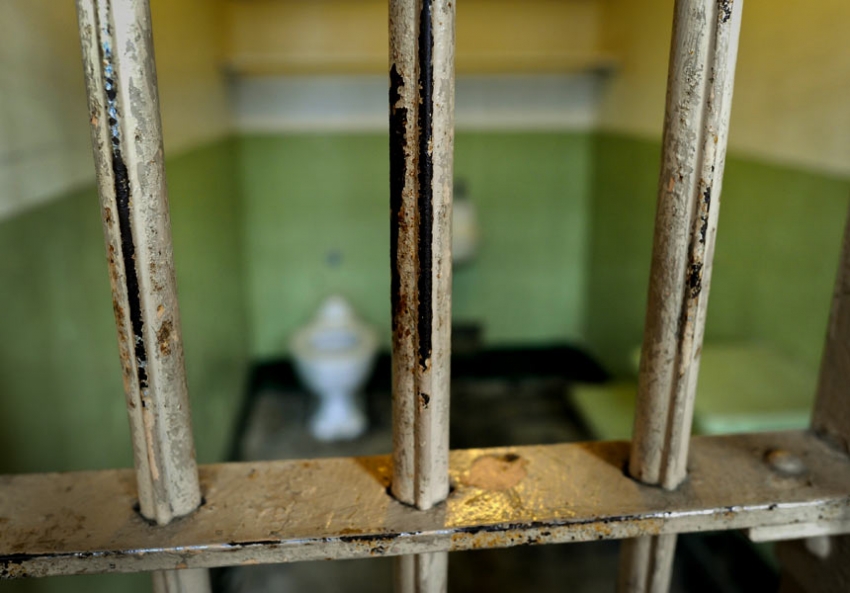 Can design innovation mitigate the savagery of excessive incarceration in America? (Timothy A. Clary/AFP/Getty Images)

Sperry hopes to convince the American Institute of Architects to prohibit its members from designing execution chambers and prisons that use long-term solitary confinement.

In 1957, as part of an effort to “stabilize” Iraq against Soviet influence, the U.S. government contracted an American architecture firm to design a humane civilian detention facility. The facility was meant as an improvement over the country’s dark, crude barracks, in order to bolster morale for police and prisoners. Less than a decade later, the facility was finished. It was named Abu Ghraib.

To architect Raphael Sperry, Abu Ghraib’s provenance illuminates how a design intended for humanitarian reform can go nowhere. While it may have been more sanitary than its predecessors, Abu Ghraib became a notorious site for torture.

Since the 1800s, prisons have evolved from penitentiaries, which isolated prisoners to enable personal repentance, to reformatories, which resembled highly regimented boot camps, to correctional facilities, which allow inmates to gather in open spaces at specified times. The latest model of prison design, known as “new generation,” seeks to maintain control by limiting movement and interaction among prisoners.

Sperry, who serves as president of the nonprofit organization Architects / Designers / Planners for Social Responsibility, believes the endless iterations of prison reform are futile until the fundamental problems plaguing our criminal justice system are resolved, such as skyrocketing rates of incarceration, mandatory minimum sentences and the over-representation of people of color in the prison population. No design innovation can mitigate the savagery of excessive incarceration in America, Sperry argues, and therefore architects should refrain from accepting contracts to “reform” prisons with new designs.

Sperry spends a good portion of his time making this case around the country, speaking to chapters of the American Institute of Architects (AIA) and educating other architects about the nature of incarceration in the United States. In particular, he aims to dissuade his colleagues from participating in what he sees as the most egregious practices of America’s criminal justice system: execution and solitary confinement. In 2011, the UN Special Rapporteur on Torture asserted that confining a prisoner for longer than 15 days had irreversible psychological effects and constituted torture. In the U.S., many inmates stay in solitary for years, or even decades.

Sperry hopes to convince the AIA to prohibit its members from designing execution chambers and prisons that use long-term solitary confinement, a proposal that has been endorsed by the ACLU, Amnesty International, the Centre for Architecture and Human Rights, Design Corps and the San Francisco chapter of AIA (the Portland chapter is currently finalizing its endorsement).

Advocating for abstention makes Sperry a controversial figure to those who believe architecture can help ameliorate prison conditions.

“We like to say modern jails should be smarter, smaller, greener and kinder,” says New York architect Kenneth Ricci. “We are looking to produce positive behaviors, so we want positive environments.” Since the 1980s, the conditions of jails have improved with the help of architects, says Ricci, adding that his firm not only draws up designs, but also helps sheriff’s departments envision how a facility will be operated.

But Sperry argues that architects really have no power once the building has been erected. “We can have great intentions,” he says, “but at the end of the day, there’s nothing to prevent the warden from doing whatever he wants.”

In California, a new spark of funding for jail expansion has ignited an interest in humane design. California prisons were ruled unconstitutionally crowded by the U.S. Supreme Court in 2011. In response, the state passed AB 109 (known as “realignment”), requiring certain low-level offenders to remain in county jails rather than move on to prison. Through that legislation and subsequent bills, the state allocated hundreds of millions of dollars for jail expansions, giving preference to jails that offer programs to reduce recidivism—such as vocational therapy, counseling rooms and classrooms for drug and mental health treatment.

With this new emphasis on rehabilitative spaces has come a demand for new designs. By the end of 2013, nearly 40 of the 58 California counties had proposed jail expansions, many of them designed to fit within this new age of reform.

San Francisco architect Beverly Prior, whose firm is currently working on a few jails in California, believes that realignment has “transform[ed] people’s way of thinking. … There is one county that has a lot of slammers. I met with them as they were trying to get more funding [from the state] and had come up with amazing new programs. Their whole brain process has really shifted.”

Sperry isn’t against expanding programming opportunities for prisoners (though he cautions that rehabilitative spaces within prisons don’t always end up being used for the benefit of the prisoners). But he argues that “virtually any reform that involves expanding jail or prison space is not one to support.” He would rather see the funds invested in programs that keep communities and families intact by allowing individuals to remain in their homes.

In some ways, San Francisco is a model of this approach. City officials pride themselves on the city’s shrinking incarceration rate. The sheriff’s office runs a pretrial diversion program; the adult probation department increasingly sends former prisoners who’ve reoffended to rehabilitative services rather than returning them to jail; and District Attorney George Gascón is committed to decreasing the jail population through lighter drug sentencing. After years of this approach, San Francisco’s jails are nearly half-empty.

Yet in December, the San Francisco Sheriff ’s Department and the Department of Public Works asked the state for $80 million in state money to replace the city’s oldest jail facility. The facility had been slated for replacement because of its seismic vulnerability, but San Francisco Chief Deputy Sheriff Matt Freeman says that it wasn’t until the possibility of a state grant appeared that the Department of Public Works got busy with specifics. Freeman says the new jail will be different: The tin echoes of the old jail will be muted, the floors carpeted, the jail bars replaced by Plexiglass, and the inmates offered classes and drug treatment. The state ultimately rejected San Francisco’s application, but the city is still pursuing the replacement jail.

It’s true that the new jail will have fewer beds than the old one. But critics of the plan, including District Attorney Gascón, question why the jail needs to be replaced at all, rather than simply closed. Sperry has taken a leadership role in the considerable opposition to the proposal, arguing that without the cushion of extra jail beds, the incentive to enact real reform would be stronger. Sperry acknowledges that San Francisco has done solid work reducing incarceration rates, but notes that the city is not immune to the problems plaguing the criminal justice system. To Sperry, refusing to entertain skin-deep design reform may be the only way to work toward overhauling the system. “This mentality [of] abolishing prisons as the goal,” says Sperry, “can help us envision short-term goals that might help us to get there.”

Charlotte Silver is an independent journalist with a focus on Israel and Palestine. She's written for The Nation, Vice, Al Jazeera English and many others. She is based in Oakland, California.