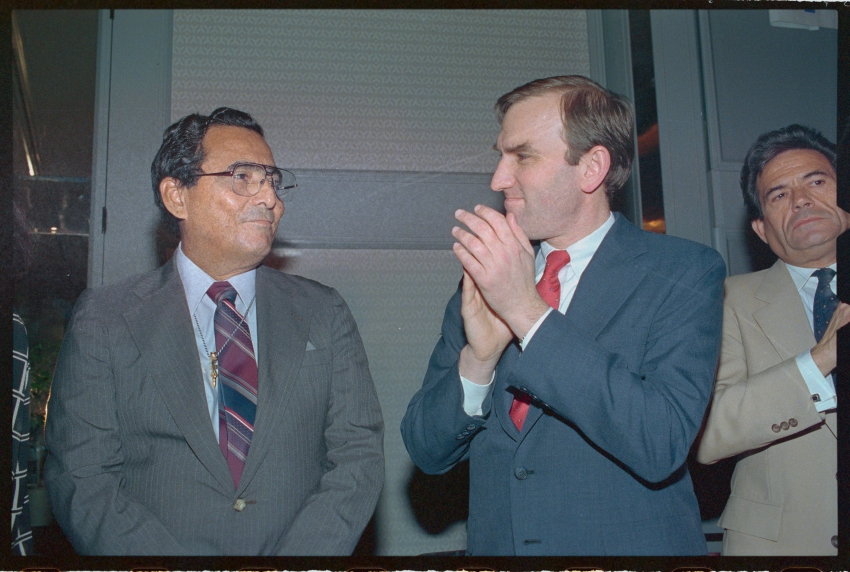 Iran-contra villain Elliot Abrams is back in action

A nursing home aide earning minimum wage caring for Alzheimer's patients is an unskilled laborer. A grade school teacher pulling down $25,000 a year in a crumbling inner-city school is barely a professional. But a politician reaping power, pay, perks and retirement packages is a public servant.

Calling George W. Bush and Jesse Helms “public servants” is like calling Iran-contra criminal Elliott Abrams an “outstanding diplomat”–which is precisely what White House Press Secretary Ari Fleischer did when he announced Abrams' appointment as senior director of the National Security Council's Office for Democracy, Human Rights and International Operations. Fleischer conveyed Bush's faith-based assertion that Abrams is “the best person to do the job,” which, happily for the appointee, does not require Senate confirmation.

For those who don't remember, Abrams was one of the most odious participants in a particularly shameful chapter of U.S. history. In the '80s, he was Ronald Reagan's assistant secretary of state for human rights and humanitarian affairs and later the assistant secretary of state for inter-American affairs. In that post, Abrams, in his own words, “supervised U.S. policy in Latin America and the Caribbean.”

That policy included backing the contras–a surrogate army dedicated to overthrowing the democratically elected Sandinista government of Nicaragua. It also involved funding the military thugocracy of El Salvador and supervising its war against a popular leftist rebellion. In his role as public servant, Abrams found time to cover up the genocidal policies of the Guatemalan government and embrace the government of Honduras while it perpetrated serial human rights abuses through Battalion 3-16, a U.S.-trained “intelligence unit” turned death squad.

Thick as thieves with Oliver North, Abrams helped evade congressional restrictions on aid to the contras. When Congress–spurred on by protests and embarrassing press disclosures–grew wary of the Central American wars, the Reaganites sought other avenues for funding them. Ever eager to serve, Abrams flew to London under the alias “Mr. Kenilworth” to solicit a $10 million contribution from the Sultan of Brunei.

In the congressional investigations that followed disclosure of the Iran-contra conspiracies, Abrams was never held accountable for the human rights violations backed, hidden and funded by the Reagan administration. Instead Abrams was accused of withholding information from Congress, a Washington euphemism for bald-face lying. In 1991, he copped to two counts of withholding information from Congress (and was granted a Christmas Eve pardon a year later by President George Bush).

Abrams was none too pleased, even with this slap on the wrist. According to a May 30, 1994 article in Legal Times, he called his prosecutors “filthy bastards,” the proceedings against him “Kafkaesque,” and members of the Senate Intelligence Committee “pious clowns” whose raison d'être was to ask him “abysmally stupid” questions. (In the spirit of full disclosure: Abrams once called me a “rotten bitch” after I tactlessly noted that much of the world considers him a war criminal.)

Abrams' own “full biography,” posted on the Web site of the Ethics and Public Policy Center–an oxymoronic think tank where he wiled away much of the Democratic interregnum awaiting the collective amnesia of the American public–omits his unpleasantness with Congress. In any case, as Fleischer said of Abrams' transgressions, “the president thinks that's a matter of the past and was dealt with at the time.”

Loved ones of the thousand unarmed Salvadoran peasants, including 139 children, killed by U.S.-trained contra troops in the 1981 El Mozote massacre may be less inclined to let bygones be bygones. Abrams has been a consistent massacre denier, even calling Washington's policy in El Salvador a “fabulous achievement.” He told Congress that the reports carried in the New York Times and Washington Post a month after El Mozote were Communist propaganda.

In 1993, members of a Salvadoran Truth commission testified about the massacre in a congressional hearing of the House Western Hemisphere subcommittee. Chairman Robert G. Torricelli (D-New Jersey) vowed to review for possible perjury “every word uttered by every Reagan administration official” in congressional testimony on El Salvador. Abrams denounced Torricelli's words as “McCarthyite crap.”

Eventually documentation emerged proving that the Reagan administration had known about El Mozote and other human rights violations all along. Abrams, however, carefully denied knowledge of the assassination of Salvadoran Archbishop Oscar Romero, committed shortly after the cleric denounced government terror. “Anybody who thinks you're going to find a cable that says that Roberto d'Aubuisson murdered the archbishop is a fool,” Abrams was quoted in a March 21, 1993 article in the Washington Post.

In fact, the Post notes, the U.S. embassy in San Salvador sent at least two such cables to Washington nailing d'Aubuisson, the right-wing politician who was the chief architect of the plot against Romero. The December 21, 1981 cable notes: “A meeting, chaired by Maj. Roberto d'Aubuisson, during which the murder of Archbishop Romero was planned. During the meeting, some of the participants drew lots for the privilege of killing the archbishop.”

Now Bush II has given Abrams a post that rewards his special experience. In the proud ranks of America's public servants, he will join other Iran-contra vets: Secretary of State Colin Powell; Deputy Secretary of State Richard Armitage; Otto Reich, assistant secretary of state for inter-American affairs; and presumably John Negroponte, awaiting confirmation as U.N. ambassador.

And who says you can't get help like you used to?

Contributing editor Terry J. Allen's work has appeared in Harper's, The Nation, New Scientist and other publications. She can be reached at tallen@igc.org.