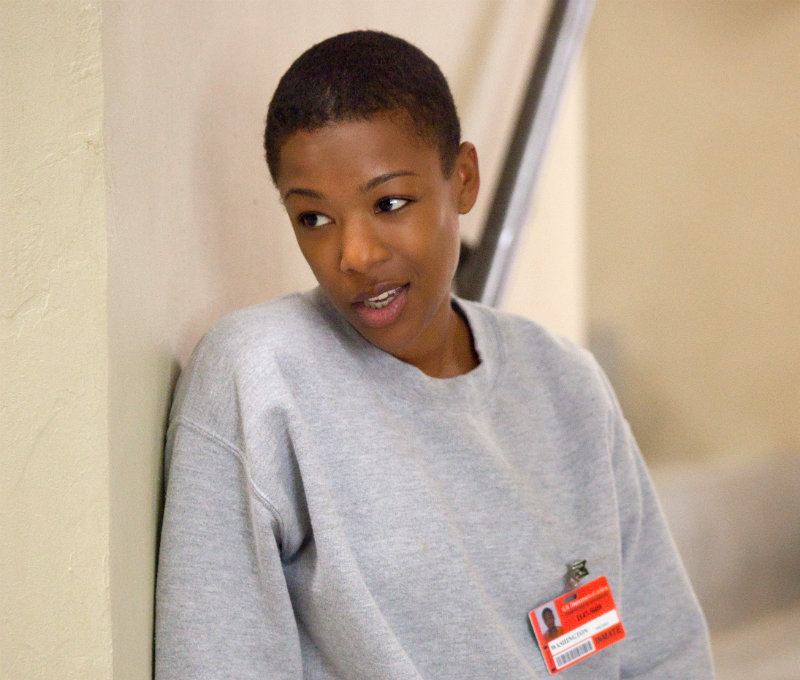 Orange Is the New Black Makes Other TV Look Quaint

The show is the first to take women this seriously.

Watching Orange is the New Black is a pleasure, and should be a pleasure for just about anyone, because these characters—just like real people—aren’t simply their identities.

In the days leading up to the highly anticipated premiere of the second season of Netflix’s Orange Is the New Black, I noticed something that worried me: Several men in my life apparently thought they weren’t supposed to watch it. These were not random, terrible, sexist men; they were guys I quite liked. It was just that, if you mentioned OITNB, women would light up, and men would sort of politely watch the conversation happen. If pressed, they’d say that they thought the show was “meant for women.”

Well, I’m not sure what men need in a show (it's hard to please all 3 billion of them at once). But whatever that is, OITNB probably has it. Season 2 contains the following: Sex, drugs, guns, gangsters, bank robbers, attempted murder, actual murder, fistfights, sex contests, poo jokes, death curses, cuss words, deadly power struggles and boobs. Lots of boobs, actually. I'm not saying all men like all of these things, of course–again, there are 3 billion of you guys, and I imagine you can find cause for disagreement amongst yourselves–but the show is hardly a knitting circle. (I mean. There is a knitting circle. But they have an alarming tendency to shiv people.) Unless you consider beating someone to death with a combination lock to be the height of delicate femininity, the action on OITNB is not all that stereotypically “girly.”

Of course, not every show needs to cater to men. I think women are entitled to entertainment that prioritizes them, that tries to speak primarily to their many identities and experiences. And Orange is the New Black does, actually, work to do that: Not only through the much-praised diversity of its almost-entirely-female cast, but through its frank, funny discussion of taboo experiences (masturbation, menopause, transition; this season, there's an entire sub-plot devoted to a debate about “which hole” pee comes from), and its genuine (though sometimes problematic) attempts to take each and every one of those women seriously. But the fact is, OITNB’s most feminist quality is not simply that it features lots of women, or that those women are roughly as diverse as women in real life tend to be. It’s the fact that it’s just a good show—replete with all the violence, graphic sex, morally gray protagonists and shocking plot twists you’d expect from more “universal” cable or pay-cable dramas—that happens to give women the key roles.

OITNB’s second season is, I think, an improvement on its first. It seems to be written as a conscious response to some of the criticisms the first season faced: that it underplayed the dangers incarcerated women face (in the words of New York Times critic Mike Hale, the show “essentially treat[ed] prison like a bad day in high school”) and devoted far too much of its time to its most privileged character, Piper Chapman (Taylor Schilling), a blithely narcissistic WASP who finds herself doing time in Litchfield prison after carrying a suitcase of money across international borders for her drug-dealing then-girlfriend. Some also rolled their eyes at the fact that every single woman in Litchfield seemed to have committed her crime by accident, under duress, or in extenuating circumstances so dire that you wondered why they hadn’t been handed a Congressional Medal of Honor rather than a prison sentence. This season demonstrates what the show can be when it answers those critiques: Life at Litchfield gets more violent. It's never been great—even last season, Tricia (Madeline Brewer) overdosed and Pennsatucky (Taryn Manning) and Piper made credible attempts to kill each other—but the sheer number of shivs, slocks, shower beatings and attempted strangulations seems to go through the roof here. There are inmates who’ve done genuinely terrible and violent things. The crimes become more severe in this season: Miss Claudette (Michelle Hurst) may have killed a sexual predator to protect a young girl, but this season, we meet a woman who bit off her girlfriend's tongue and swallowed it. And once you learn exactly what Morello (Yael Stone) did to get into Litchfield, well, it changes things. (Although, as you’d expect from a show that wants to challenge your preconceptions, the inmates who’ve committed the scariest crimes are usually the ones who seem the most harmless—and even they command sympathy.) And, last but not least, after a season premiere dedicated entirely to her character, Piper Chapman takes a backseat to the real action.

In this second season, the show shuffles its characters like a deck of cards, bringing new players to the top, and making some beloved characters all but disappear: Sophia, the transgender inmate played by breakout star Laverne Cox, is reduced to a bit part, and Alex (Laura Prepon), Piper’s drug-dealing ex and main love interest in Season 1, only appears in four of 13 episodes. Pornstache (Pablo Schreiber), the sexually predatory and also drug-dealing prison guard who served as one of last season’s main antagonists, is also absent for much of the proceedings, although I doubt that anyone misses him as much as they miss Laverne Cox or Laura Prepon. But even though we lose track of interesting stories, that re-shuffling brings much-needed focus to a new set of characters—namely, the black women of Litchfield, who didn’t have back stories or starring roles last season.

Although Piper is still around and carrying major plotlines, the real protagonist of the season is Poussey (Samira Wiley), who’s granted a tragic, complicated love story—her unrequited devotion to her best friend, Taystee (Danielle Brooks)—and a heroic quest: bringing down a prison smuggling ring. To play opposite our new heroines, we get a new villain: Vee (Lorraine Toussaint), a woman who, in the outside world, provided a home to orphaned and desperate children, in exchange for making them move her drugs. Taystee was one of Vee’s “girls” on the outside, and now that Vee is locked up in Litchfield, she intends to rope Taystee back into the family business.

It’s no surprise that Wiley and Brooks can carry the show; approximately 97 percent of the Internet fell in love with one or both of them by the time the end of last season. Wiley, in particular, is given all sorts of meaty, complicated scenes to play, and she knocks each and every one out of the park. But Toussaint is also wonderful: Vee could be impossibly evil—a professional child predator whom Poussey describes as “a pedophile without the sex”—but Toussaint makes her convincing, three-dimensional, even strangely admirable: a master manipulator who is dangerous primarily because she can convince just about anyone of just about anything. In one of the season’s more upsetting twists, Vee befriends and nurtures the lonely, mentally ill Suzanne “Crazy Eyes” Warren (Uzo Aduba), reminding her that she’s a “smart, strong black woman.” The reasons for Vee's “friendship” won’t become entirely clear until the last episode of the season. But the unqualified trust Suzanne offers Vee, and the many ways that trust is betrayed and abused, are intensely  hard to watch.

Again: This isn’t uniquely “girly” stuff. There’s a drug dealer  corrupting and abusing her young apprentice in order to facilitate her own rise to power. There's a smart and ambitious woman entering her family’s criminal business despite her desire to go legitimate. There's a young hero risking her life to save her unattainable beloved from certain peril. Those are also, respectively, the plots of Breaking Bad, The Godfather, and most Arthurian romances, if you’re keeping track. But they work just as well, and gain added dimension, when they're the story of Vee and Suzanne, or Taystee and Vee, or Poussey and Taystee. The dragon, the knight, the princess in the tower: All are women. And, more than that, these four are women of color, none of whom got so much as a flashback last season. The show trusts us to follow them as they carry the plot.

The Latina characters also get a bit more time, this year; Rosa (Barbara Rosenblat), a woman with terminal cancer who barely appeared last year, becomes one of the season's leads, and Gloria (Selenis Leyva), the hard-bitten chef, gets a particularly well-done flashback episode.

Sure, alongside all of this, there is plenty of fare that may particularly please female viewers: digs at misogynists, sly pro-feminist and pro-social-justice statements, an episode in which the homophobic Pennsatucky is converted to “the gay agenda” when promised that it largely means the overthrow of men and the establishment of total matriarchy. (Straight women will be allowed to keep men around for sex and menial labor in this Utopia, Big Boo (Lea DeLaria) explains, but they have to promise to cruelly discard said men after sexual gratification has been achieved.) The show is also continually willing to explore the harsher parts of women's existence: There are plenty of stories about domestic violence, abusive parents, racism, and homophobia.

But the accomplishment isn’t simply that a lot of relatively diverse female characters exist on a TV screen, or that the writing often makes feminist points, or even that the female characters themselves they’re treated with some level of dignity and compassion. It’s that they’re not presented as some dour, grudging, eat-your-vegetables exercise in recognizing that women or incarcerated people exist. Watching Orange is the New Black is a pleasure, and should be a pleasure for just about anyone, because these characters—just like real people—aren’t simply their identities. They’re given real, compelling, interesting stories that chug along at such a rate you don’t even realize you’re learning something until you’ve already watched eight episodes in a row.

“The tendency of innovative literature is to include the hitherto excluded,” wrote Margaret Atwood, “which often has the effect of rendering ludicrous the conventions that have just preceded the innovation.” You could say the same thing about great TV. If Orange is the New Black does anything, it’s not to give viewers a high-five or a gold star for being willing to admit that women are a diverse group of people, or for being willing to hear women’s stories. It simply makes it seem all the more ridiculous that so many shows aren’t telling them—or that we could ever think of them as relevant only to girls.