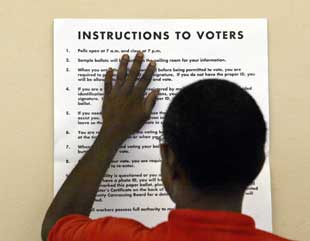 The Ballots at the Back of the Bus

Most voters in Ohio chose Kerry; here’s how the votes vanished.

This past February, Ohio Secretary of State Ken Blackwell told the president of the State Senate, “The possibility of a close election with punch cards as the state’s primary voting device invites a Florida-like calamity.” Blackwell, co-chair of Bush-Cheney reelection campaign, wasn’t warning his fellow Republican of disaster; he was boasting of an opportunity to deliver Ohio for Team Bush no matter what the voters wanted. And this past Election Day most voters in Ohio wanted JFK, not GWB. But their choice won’t count because their votes won’t be counted.

The ballots that add up to a majority for John Kerry in Ohio are locked up in two Republican hidey-holes: “spoiled” and “provisional.”

In a typical presidential election, 2 million ballots are marked “spoiled” and then chucked in the garbage, uncounted. But a dive into the electoral dumpster reveals something special about these votes. In a precinct-by-precinct analysis of the Florida 2000 race, the U.S. Civil Rights Commission discovered that 54 percent of spoiled ballots were cast by African-Americans. Florida is typical. Nationwide, the number of black votes “disappeared” into the spoiled pile is about 1 million. The other million in the no-count pit come mainly from Hispanic, Native-American and poor white precincts, a decidedly Democratic demographic.

Vote spoilage comes in two flavors. “Overvotes” are where there are too many punches in the cards. And “undervotes” are where the hanging, dimpled and “pregnant” chads created by old punch card machines hang on. Machines can’t these kinds of undervotes, but we humans, who know a hole when we see one, have no problem … if we’re allowed to. This is how Katherine Harris defeated Al Gore: by halting the hand count of the spoiled punch cards not, as is generally believed, by halting a recount.

Federal investigators determined that in the 2000 Florida race black voters’ ballots spoiled 900 percent more often than white voters, mainly due to punch card error. This year, Ohio was the only one of 50 states to refuse to eliminate or fix these vote-eating machines, even in the face of a lawsuit by the ACLU.

Apparently, the Ohio Republicans liked what the ACLU found. The civil rights group’s expert testimony concluded that Ohio’s cussed insistence on forcing 73 percent of its electorate to use punch card machines had an overwhelming racial bias, voiding votes mostly in black precincts. Blackwell doesn’t disagree; and he hopes to fix the machinery … after George Bush’s next inauguration. In the meantime, the state’s Attorney General Jim Petro, a Republican, postponed the trial date of the ACLU case until after the election.

Fixing the problem is easy. If Ohio had placed a card-reading machine in each polling station, as Michigan did this year, voters could have ensured their vote would tally. If not, they would have gotten new cards.

Blackwell knows that. He also knows that if those reading machines had been installed, almost all of the 93,000 spoiled votes (from overwhelmingly Democratic areas) would have closed the gap on Bush’s lead of 136,000 votes.

In Ohio, more than 155,000 voters were shunted to these second-class ballots. The election-shifting bulge in provisional ballots (more than 3 percent of the electorate) was the direct result of the national Republican strategy that targeted African-American precincts for mass challenges on Election Day.

And Blackwell has a few rules to ensure a large proportion of provisional ballots won’t be counted. For the first time in memory, the secretary of state banned counting ballots cast in the “wrong” precinct, though all neighborhoods shared the same slate of presidential candidates.

This is the first time in four decades that a political party systematically barred tens of thousands of black voters.

While investigating for BBC Television, we obtained three dozen of the Republican Party’s confidential “caging lists,” their title for the spreadsheets that list the names and addresses of Ohio voters they intended to block on any pretext. Every address of the thousands on these Republican hit lists was located in black-majority precincts. You might find that nasty and racist. It may also be a crime.

Before 1965, Jim Crow laws did not bar blacks from voting. Minor technical voting requirements were applied only to African-Americans. That year, Congress voted to make profiling and impeding minority voters a criminal offense under the Voting Rights Act.

But that didn’t stop the Republicans of 2004. Their mass challenge to black voters is not some low-level dirty tricks operation of local party hacks. E-mails show the lists were copied directly to the Republican National Committee’s chief of research and to the director of a state campaign.

Many challenges center on changes of address. On one Republican caging list, 50 addresses changed from Jacksonville to overseas—African-American soldiers shipped “over there.”

Blackwell has said he will count all the “valid” provisional ballots. However, his rigid regulations are rigged to knock out enough voters to keep Bush’s skinny lead alive. Other pre-election maneuvers by Republican officials—late and improbably large purges of voter rolls, rejection of registrations—maximized the use of provisional ballots that will never be counted. For example, a voter wrongly tagged as an ineligible felon voter (and there are plenty in that category, mostly African-Americans), may lose his ballot even though wrongly identified.

During the campaign it was heartening that John Kerry broke the political omerta that seems to prohibit public mention of the color of votes not counted in America. “Don’t tell us that in the strongest democracy on earth … a million disenfranchised African-Americans is the best we can do.” The Senator promised the NAACP convention, “This November … we’re going to make sure that every single vote is counted.”

But Kerry waited less than 24 hours to abandon more than a quarter million Ohio voters still waiting for their provisional and chad-spoiled ballots to be counted.

While disappointing, I can understand the cold calculus against taking the fight to the end. To count the ballots, Kerry’s lawyers would first have to demand a hand reading of the punch cards. Blackwell, armed with the Supreme Court’s Bush v. Gore diktat, would undoubtedly pull a “Kate Harris” by halting or restricting a hand count. Most daunting, Kerry’s team also would have to litigate each rejected provisional ballot in court. This would entail locating up to a hundred thousand voters to testify to their right to the vote as Blackwell challenged each. Given the odds and the cost to his political career, Kerry bent, not to the will of the people, but to the willpower of the Ohio Republican machine.

We have yet to total the votes lost in missing absentee ballots, in eyebrow-raising touch screen tallies, in purges of legal voters from registries and other games played in swing states. Undoubtedly, Kerry also took New Mexico. But why dwell on these things? Our betters in the political and media elite have told us to get over it. Move on.

To the victors go the spoils of electoral class war. As Ohio’s politically ambitious secretary of state brags on his own Web site, “Last time I checked, Katherine Harris wasn’t in a soup line, she’s in Congress.”