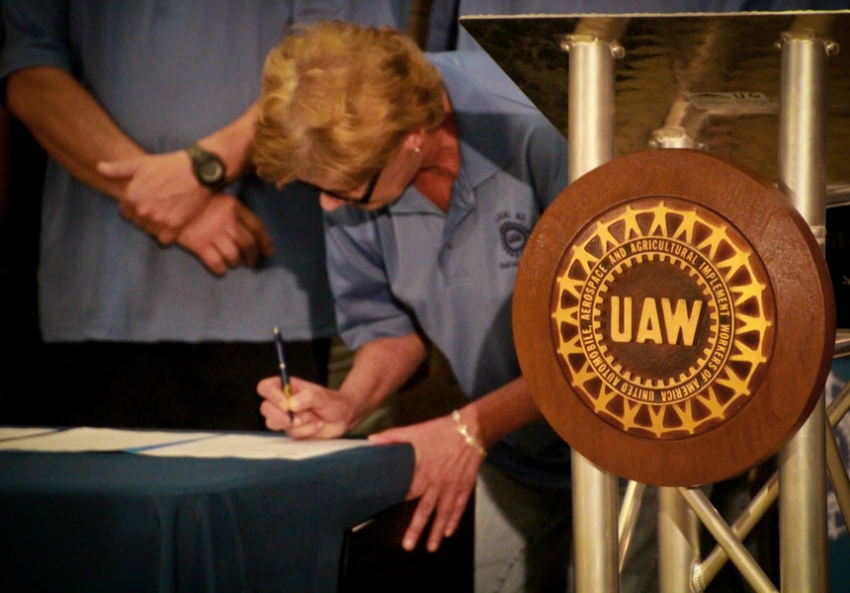 Will the UAW’s latest experiment in Chattanooga pan out?

We know from Ford, General Motors and Chrysler that when workers have a voice, productivity improves, ergonomics improves, waste is reduced and workers’ comp costs are reduced.

When the workers at the Volkswagen plant in Chattanooga, Tennessee, voted in February on whether to unionize, the stakes were high. A victory would create a foothold for labor in the elusive South, while a defeat could be interpreted as a sign of the labor movement’s inexorable decline.

The vote went against the union—712 to 626—and labor was left to figure out its next move. Under U.S. labor law, another vote cannot be held for a year.

On July 10, the United Auto Workers (UAW) announced they were establishing a new local at Volkswagen Chattanooga. Local 42 is a members-only (or “minority”) union—a model used rarely in the United States. Unlike a traditional American union, in which a majority of workers vote for a union that will represent the entire work-force, a members-only union is voluntary and represents only workers who choose to join.

While a company has no legal obligation to negotiate with a members-only union, the UAW has announced a “consensus” with Volkswagen in which the company will recognize Local 42 once it has signed up a “meaningful portion” of the workers. If Local 42 can enlist a majority, VW may choose to recognize the union as the exclusive bargaining representative of the entire workforce, without another NLRB election.

With this experiment, Chattanooga may again become a harbinger of labor’s future.

To succeed, the local will need to work outside many of the protections of labor law, which will require unusual agility and creativity. To discuss the potential of minority unionism, In These Times talked with former UAW President Bob King, who retired in June, Catherine Fisk, a law professor at the University of California-Irvine and an expert on minority unionism, and Matthew Finkin, a professor of labor law at the University of Illinois School of Law.

Bob, tell us about the UAW’s minority union at VW Chattanooga.

Bob: We’ve chosen to call it a members’ union to really stress that it is about the workers in Chattanooga. They’re taking a lot of responsibility for the forming of their local.

Matthew: What does this local actually do? It doesn’t bargain for enforceable agreements with VW, does it?

Bob: That’s unknown at this point. We think that VW will address issues with us. Workers in Chattanooga have brought up a lot of shop-floor concerns. As we address these issues, I expect we will be able to sign up a majority of workers and bargain a full agreement.

Catherine: I don’t see any reason why the members’ union couldn’t negotiate a contract with VW before reaching a majority. They just can’t, consistent with the law, apply that contract to anybody that’s not a member.

Matthew: As a practical matter, it’s not conceivable to me that some of what you’re bargaining about won’t be to everybody’s benefit. And VW could extend the agreed-upon terms to everybody.

Bob: Other workers would get the benefits of management working with Local 42 on issues like health and safety or ergonomics or line speed. But if there were disciplinary hearings or things like that, non-union workers wouldn’t have the benefit of representation.

The local has stated that one of its main goals will be to form a European-style Works Council, like those in VW’s other factories around the world. Typically, Works Councils represent the interests of both workers and management, and handle shop-floor issues like implementing new technologies and reorganizing jobs. In a U.S. context, what would the line be between the Works Council’s role and the union’s role?

Bob: There won’t be a Works Council at VW until we have majority representation. But once we do, what happens in Germany is the IG Metall, or the union—it’s the UAW here—negotiates major economic issues like wages. And the day-to-day working condition issues would be handled by the Works Council: health and safety, ergonomics, line speed, shifts, promotions, job assignments, classifications.

Could this be a model for organizing other foreign carmakers?

Matthew: Let me play devil’s advocate here. I’ve done a lot of work in Germany, and the view over there is that even among German employers, Volkswagen is unique. The feedback I’m getting from my friends in Germany is that you’ve got an extraordinarily well-intentioned partner in Volkswagen, but that’s not going to be replicable in Daimler or BMW, for example.

Bob: You are right. VW management believes in representation and operates with much greater integrity than its competitors in terms of living up to principles of social responsibility.

But it’s the intention of Dennis Williams and Gary Casteel—the two top UAW national leaders at this point—to document the key metrics of the facility. We know from Ford, General Motors and Chrysler that when workers have a voice, productivity improves, ergonomics improves, waste is reduced and workers’ comp costs are reduced. If you’re competing globally, having a workforce that’s engaged and has a real voice will make for a much better operation.

It does also put pressure on Daimler management and BMW management. Having representation without a majority is an accepted principle in most of Europe.

Specifically, is there any chance the UAW may take this approach at the Canton, Mississippi, Nissan plant, where the company has been much more hostile than VW to the union?

Bob: At Nissan, the UAW has been extremely engaged in advocating to the company that it should work with UAW. I think this can give the UAW a stronger argument there.

Are unions other than the UAW looking to the members-only model?

Bob: The labor leaders I’ve talked to see Local 42 as a positive step and an opportunity for a different way to approach organizing in the South.

Matthew: When I published a think piece on minority unions in 1996, I was asked to meet with the AFL-CIO executive committee, but I was disinvited. I said,“You mean leaders of American unions don’t want to take an hour out of their lives for a confidential conversation about an alternative to exclusive representation?” And the AFL-CIO rep said, “Yes.” This was 18 years ago. And I said, “It seems to me that’s a problem. They’re not thinking outside the box of the 1935 National Labor Relations Act.” So Bob, are you saying there’s a possibility of more openness now?

Bob: There is. There is a realization that insanity is doing the same thing over and over again and expecting a different result.

Does this model have particular implications in right-to-work states?

Catherine: Yes, in right-to-work states, unions might want to say, “Look, we don’t want to have to pay for services for free riders and therefore we’ll be members only.” At least for contract enforcement and anything that would require providing individual services, the UAW’s VW case could serve as an empirical example of this.

Bob: I agree. I don’t think that unions should have to represent people who choose not to pay fees or not to be members.

Catherine: Members-only unions will also force the national right-to-work people to reveal their cards. Are they libertarian, in the sense that everybody should have the right to choose union representation, which is what they’ve said for 50 years? Or is their message, “We don’t want a union, and you shouldn’t want one, either?” What they say in light of Chattanooga will be really interesting.

Bob: You’re right—they’re really in a box on that.

Catherine: This is an incredibly exciting empirical test of an argument that’s been going on for decades in the United States: Can a members’ union effectively be a voice for workers even without certification or recognition? Do minority unions undermine genuine independent unions, or do they enable them?

The UAW is a sponsor of In These Times. Sponsors have no role in editorial content.