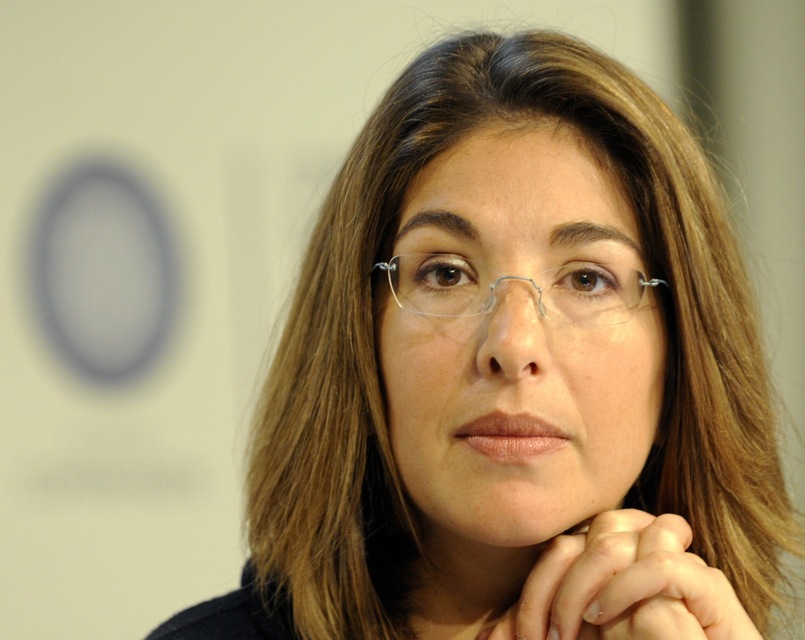 You can’t fight climate change without fighting capitalism, argues Klein in This Changes Everything.

In her previous books The Shock Doctrine: The Rise of Disaster Capitalism (2007) and NO LOGO: No Space, No Choice, No Jobs (2000), Canadian author and activist Naomi Klein took on topics like neoliberal “shock therapy,” consumerism, globalization and “disaster capitalism,” extensively documenting the forces behind the dramatic rise in economic inequality and environmental degradation over the past 50 years. But in her new book, This Changes Everything: Capitalism vs. the Climate (due in stores September 16), Klein casts her gaze toward the future, arguing that the dangers of climate change demand radical action now to ward off catastrophe. She certainly isn’t alone in pointing out the urgency of the threat, but what sets Klein apart is her argument that it is capitalism—not carbon—that is at the root of climate change, inexorably driving us toward an environmental Armageddon in the pursuit of profit. This Changes Everything is well worth a read (or two) in full, but we’ve distilled some of its key points here.

“Only mass social movements can save us now. Because we know where the current system, left unchecked, is headed.”

Much of the conversation surrounding climate change focuses on what Klein dismisses as “Band-Aid solutions”: profit-friendly fixes like whizz-bang technological innovations, cap-and-trade schemes and supposedly “clean” alternatives like natural gas. To Klein, such strategies are too little, too late. In her drawn-out critique of corporate involvement in climate change prevention, she demonstrates how profitable “solutions” put forward by many think-tanks (and their corporate backers) actually end up making the problem worse. For instance, Klein argues that carbon trading programs create perverse incentives, allowing manufacturers to produce more harmful greenhouse gases, just to be paid to reduce them. In the process, carbon trading schemes have helped corporations make billions—allowing them to directly profit off the degradation of the planet. Instead, Klein argues, we need to break free of market fundamentalism and implement long-term planning, strict regulation of business, more taxation, more government spending and reversals of privatization to return key infrastructure to public control.

2. We need to fix ourselves, not fix the world.

“The earth is not our prisoner, our patient, our machine, or, indeed, our monster. It is our entire world. And the solution to global warming is not to fix the world, it is to fix ourselves.”

Klein devotes a full chapter of the book to geoengineering: the field of research, championed by a niche group of scientists, funders and media figures, that aims to fight global warming by altering the earth itself—say, by covering deserts with reflective material to send sunlight back to space or even dimming the sun to decrease the amount of heat reaching the planet. However, politicians and much of the global public have raised environmental, health and ethical concerns regarding these proposed science experiments with the planet, and Klein warns of the unknown consequences of creating “a Frankenstein’s world,” with multiple countries launching projects simultaneously. Instead of restoring an environmental equilibrium, Klein argues these “techno-fixes” will only further upset the earth’s balance, each one creating a host of new problems, requiring an endless chain of further “fixes.” She writes, “The earth—our life support system—would itself be put on life support, hooked up to machines 24/7 to prevent it from going full-tilt monster on us.”

“A great many progressives have opted out of the climate change debate in part because they thought that the Big Green groups, flush with philanthropic dollars, had this issue covered. That, it turns out, was a grave mistake.”

Klein strongly critiques partnerships between corporations and major environmental groups, along with attempts by “green billionaires” such as Bill Gates and Virgin Group’s Richard Branson to use capitalism to fighting global warming. When capitalism itself is a principal cause of climate change, Klein argues, it doesn’t make sense to expect corporations and billionaires to put the planet before profit. For example, though the Gates Foundation funds many major environmental groups dedicated to combating climate change, as of December 2013, it had at least $1.2 billion invested in BP and ExxonMobil. In addition, when Big Greens become dependent on corporate funding, they start to push a corporate agenda. For instance, organizations such as the Nature Conservancy and the Environmental Defense Fund, which have taken millions of dollars from pro-fracking corporate funders, such as Shell, Chevron and JP Morgan, are pitching natural gas as a cleaner alternative to oil and coal.

4. We need divestment, and reinvestment.

“The main power of divestment is not that it financially harms Shell and Chevron in the short term but that it erodes the social license of fossil fuel companies and builds pressure on politicians to introduce across-the-board emission reductions.”

Critics of the carbon divestment movement often claim that divestment will have minimal impact on polluters’ bottom lines. But Klein argues that this line of reasoning misses the point, quoting Canadian divestment activist Cameron Fenton's argument that “No one is thinking we’re going to bankrupt fossil fuel companies. But what we can do is bankrupt their reputations and take away their political power.” More importantly, divestment opens the door for reinvestment. A few million dollars out of the hands of ExxonMobil or BP frees up money that can now be spent developing green infrastructure or empowering communities to localize their economies. And some colleges, charities, pension funds and municipalities have already got the message: Klein reports that 13 U.S. colleges and universities, 25 North American cities, around 40 religious institutions and several major foundations have all made commitments to divest their endowments from fossil fuel stocks and bonds.

5. Confronting climate change is an opportunity to address other social, economic and political issues.

In The Shock Doctrine, Klein explained how corporations have exploited crises around the world for profit. In This Changes Everything, she argues that the climate change crisis can serve as a wake-up call for widespread democratic action. For instance, when a 2007 tornado destroyed most of Greensburg, Kansas, the town rejected top-down approaches to recovery in favor of community-based rebuilding efforts that increased democratic participation and created new, environmentally-friendly public buildings. Today, Greensburg is one of the greenest towns in the United States. To Klein, this example illustrates how people can use climate change to come together to build a greener society. It also can, and indeed must, spur a radical transformation of our economy: less consumption, less international trade (part of relocalizing our economies) and less private investment, and a lot more government spending to create the infrastructure we need for a green economy. “Implicit in all of this,” Klein writes, “is a great deal more redistribution, so that more of us can live comfortably within the planet’s capacity.”

Jessica Corbett and Ethan Corey are Summer 2014 interns at In These Times.