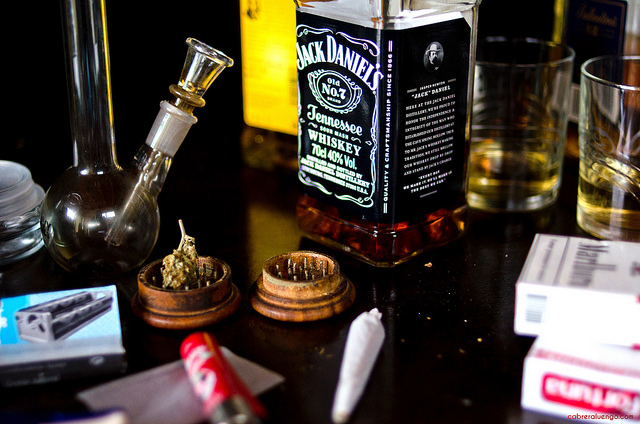 Marijuana prohibition has been as big of a disaster as alcohol prohibition.

So the Battle Over Legalization Has Come Down to This: A Duel Between Weed and Booze

Drug reformers say marijuana is a far less harmful substance than alcohol—and are willing to go “hit for shot” to prove it.

Boyer has challenged the police chief to a “hit for shot” duel - for every shot of alcohol Googins takes, Boyer would take a toke of marijuana, and the public would be able to see who is in worse physical condition in the end.

When Colorado voters in 2012 approved a ballot measure legalizing marijuana, the state not only broke new ground in the ongoing battle over narcotics policy, it also validated an innovative new political message—one that compares cannabis to alcohol. Two years later, that comparison is being deployed in key marijuana-related elections throughout the country, and drug reform advocates are so sure marijuana is safer than alcohol, they are now challenging police to a “drug duel” to prove their point.

The proposal for the duel from David Boyer, an official with the Marijuana Policy Project, came after South Portland Police Chief Edward Googins announced his opposition to a municipal referendum to legalize marijuana possession.

“Claims that marijuana is safer than alcohol are so bogus it’s not even funny,” Googins told a local newspaper.

In response, Boyer has challenged the police chief to a “hit for shot” duel—for every shot of alcohol Googins takes, Boyer would take a toke of marijuana, and the public would be able to see who is in worse physical condition in the end.

“We have done everything in our power to highlight the danger associated with laws that steer adults toward drinking by threatening to punish them if they make the safer choice to use marijuana,” Boyer said in a press release promising to bring “enough alcohol to kill a man” to the duel. “Enough is enough. Perhaps this dramatic demonstration of the relative harms of each substance will finally get the point across.”

The “drug duel” concept—and the larger comparison between cannabis and alcohol - is the brainchild of MPP officials Steve Fox and Mason Tvert. In the years leading up to Colorado's historic legalization vote, Tvert slammed politicians like John Hickenlooper and Pete Coors for opposing marijuana legalization even though they made their personal fortunes selling alcohol. He famously challenged both of them to drug duels.

Following unsuccessful legalization campaigns in Nevada and California, Tvert and Fox convinced advocates in Colorado to explicitly frame the 2012 campaign around the alcohol-marijuana comparison. Ultimately, the ballot initiative was called the Regulate Marijuana Like Alcohol Act of 2012.

Tvert says that in a state with a beer brewer governor, a burgeoning craft beer industry, and a professional baseball stadium named after an alcohol brand, the strategy gave voters a familiar product to which they could compare cannabis.

From crime research to hospital data to morbidity statistics, there is plenty of evidence to support that assertion. And since the Colorado vote, the message has gained political traction.

In January, for instance, the New Yorker reported that President Obama said, “I don’t think [marijuana] is more dangerous than alcohol.” A few months later, a Pew Research Center poll showed that 69 percent of Americans say alcohol is more harmful to people’s health than marijuana.

In this election, the alcohol-marijuana comparison is defining legalization campaigns not only in South Portland, but also in Alaska. There, drug reformers call their effort the Campaign to Regulate Marijuana Like Alcohol. They have sponsored bus ads promoting marijuana as a safer drug than alcohol.

Additionally, though much of the legalization campaign happening in Oregon has been about public safety, activists designed that initiative to invoke the alcohol comparison. Specifically, their proposal would have the Oregon Liquor Control Commission expand its regulatory oversight to marijuana.

“Everyone recognizes that alcohol prohibition was a huge failure,” Tvert says. “Our point is that marijuana prohibition has been just as big of a disaster.”