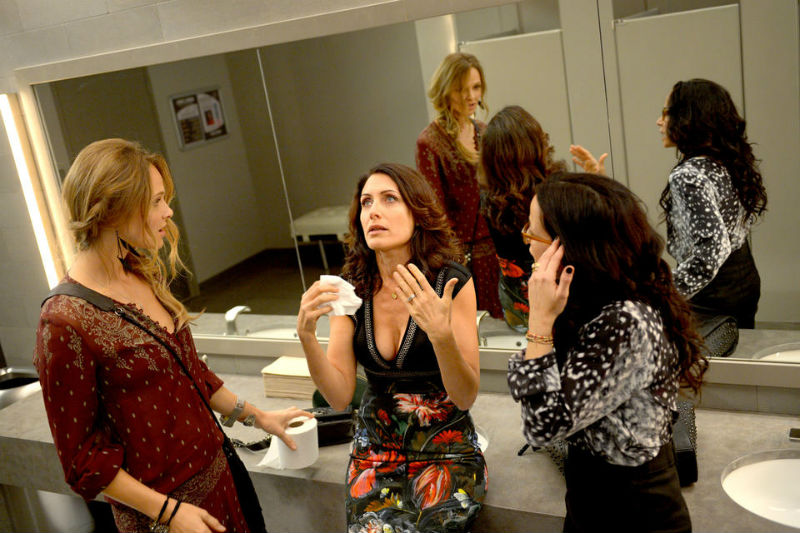 If it can ever stop trying to be Sex and the City, or some even-less-real version of Real Housewives, Girlfriends' Guide to Divorce will have a story to tell.

A Girlfriends’ Guide to Rage

Girlfriends’ Guide to Divorce has to stop trying so desperately to be a “women’s show.”

This show has screaming fights, lots of them. They’re not at all cute or witty. When Abby and her husband get into it, they honestly do look like people at the end of the worst relationship of their lives, far past the point of negotiation.

Somewhere inside of the new Bravo drama Girlfriends' Guide to Divorce, there is a genuinely good show. It comes in little flickers, a weirdly visceral scene here, a witty burn there (a woman trying to convey how inappropriately young somebody's girlfriend is: “she thinks 27 Dresses is a classic film”) and in the too-long-absent eye roll of Janeane Garofalo. And Laverne Cox is going to have a role on this show, soon. Laverne Cox!

I'm telling you this now, so that I can tell you the bad news: I think Girlfriends' Guide To Divorce can only really succeed as an interesting show about women once it stops trying, so frantically, to be a “women's show.”

Friends: I have a confession to make. I, myself, am a woman. And yet, there are so many things I have never done:

The women in A Girlfriends’ Guide to Divorce—created by Marti Noxon, a veteran producer and screenwriter of Buffy the Vampire Slayer and Mad Men, and loosely based on a series of self-help books by Vicki Iovine—do, however, all of these things. And more: Every single character seems to live in a gigantic Los Angeles mansion. Someone holds a dog hostage because her Manolos have been thrown in a pool. Someone else sleeps with her ex-husband for a Tesla. Not only is a “Cavalli changing pad” mentioned—only the best for your baby’s feces!—we meet a character who aspires to create high-end jewelry for infants, which may seem like a great idea until you imagine a bunch of 15-month-olds showing up in emergency rooms with diamond bracelets lodged down their throats. Which is to say: Girlfriends’ Guide seems, immediately and overwhelmingly, to be imitating a very specific, and very well-known, television show: Fashion, gal pals, sex scenes and shoes, all served up in a glossy, soft-lit, uncritically consumerist package. Even a favorable review in the Hollywood Reporter admits, “This series is the closest anything in recent memory has come to Sex and the City.”

There may be women who genuinely feel represented, or at least welcomed, by this kind of entertainment. I don’t want to discount them. But I know a lot of complex, unique, smart people who also happen to be women and are definitely not catered to by a one-size-fits-all concept of “women’s entertainment” that is as pink, sugary and overpriced as a Cosmo in a Manhattan bar.

And yet! And yet: The prospect of that good show keeps nagging at me. Not only is Noxon’s resume compelling—her seasons of Buffy were divisive, but a bad season of Buffy or Mad Men is better than a good season of most other shows—I can’t escape the feeling that, under all the hard-candy coating, there's something delightfully bitter. When it’s operating at its best, Girlfriends’ Guide isn’t a show about Manolos and baby jewelry. It’s a show about rage.

Abby McCarthy (played by Lisa Edelstein of House) is a best-selling “mommy author” who writes guides to achieving perfect family bliss by drawing on her own, extremely affluent life. Is all as perfect is it seems? Does Abby actually have all the answers? Shockingly, no: In a “physician, heal thyself” twist familiar from approximately nine dozen TV shows ranging from Mad Men to, um, House, it turns out that Abby’s marriage is fracturing and that she’s beginning an acrimonious divorce. She pops some mood stabilizers and tells an audience at a book signing that she has no idea how to have a happy family life, and also, that she fantasizes about her husband’s death sometimes, which puts her career in the toilet just as the two split up.

In the quest to recover her life, Abby is assisted by two friends—or, you might say, “girlfriends”—who are also recent divorcees. Lyla is an Assertive Career Woman, a lawyer by trade, and is played by the patron saint of nerdy female bitterness, Janeane Garofalo. Phoebe is a Bohemian Adventuress, a former model who wears lots of crop tops, and is played by Beau Garrett. (She’s the one who wants to make baby jewelry.) Both Garofalo and Garrett commit to their parts with admirable professionalism, despite the unfortunate fact that they are playing, respectively, Miranda from Sex & the City and Jessa from Girls. Garofalo will be leaving the show mid-season, which perhaps shows that her commitment only stretches so far, but she brings a tremendous amount of wit and real, hard-edged humanity to a character who’s not only a retread of an already famous character, but essentially the “bitchy empowered woman” trope come to life. (In one of her increasingly vengeful attempts to destroy her ex-husband’s life, she gets him drunk and sleeps with him so that she can report him for drunk driving).

In the middle of all this is Edelstein. And there are few women who deserve to carry a show quite so much as she does. Think back to how spectacularly ill-written her character was on House: Depending on the case of the week, Dr. Cuddy bounced between sex kitten, wise and all-forgiving mother figure, baby-crazy caricature of single female sadness, and irrational shrew who lived to crush House’s genius. None of this baffling collage of misogynist stereotypes quite lined up, and the only thing making Cuddy seem remotely like a coherent person was Edelstein herself: Her sheer screen presence, her wry intelligence and raspy-voiced vulnerability, patched together a bad role. And they very nearly patch together Girlfriends’ Guide, even when it’s at its Cavalli-changing-pad worst. Nothing happening around Abby is remotely believable, but she always seems like a real (and, if it matters, sympathetic) woman, going through a very hard time.

In the ugliest scenes of the show—Abby’s marriage coming apart—Edelstein actually gets to use her range, and you can almost forget the oppressively wealthy, white heterosexuality of it all. This show has screaming fights, lots of them. They’re not at all cute or witty. When Abby and her husband get into it, they honestly do look like people at the end of the worst relationship of their lives, far past the point of negotiation.

These scenes are hard to watch.

But they’re also sort of fun, because although this show might not have a lot going for it, it does have a great villain: Abby’s husband, played by Scandal’s Paul Adelstein, is one of the worst human beings I have ever seen on a television screen. We’re talking Larry-on-Orange-Is-The-New-Black levels of awfulness, here: He hasn’t worked in ten years, because Abby’s wealthy, but he both refuses to take jobs that are beneath his dignity (landscaping; directing a CW television show) and yells at Abby because she won’t get him a $4,500-per-month apartment. The series begins with him sneaking into the house after a tryst with his 25-year-old girlfriend, but he throws a massive, marriage-ending tantrum when Abby finally gives up and sleeps with another man. He makes fun of Abby’s books, even though they pay his rent; he refers to Abby as “the old pussy.” It’s cartoonish, and narratively clumsy—I still have no idea why these two characters were ever married; was Abby in a coma the whole time, or something?—but the impact is visceral. And it gives some heft to Abby’s rage: She genuinely did try to make this gigantic 2-year-old of a man love her, and because she couldn’t, she’s now both alone and in debt.

Granted, this idea of utter martyrdom, or the fantasy that someone who doesn't love you doesn't deserve love at all, is a particularly self-serving delusion that many people maintain about their break-ups and divorces. (It’s astonishing how the most important and lovable person you’ve ever met can become history’s greatest monster the moment you stop having sex with them.) And though the show does try to root all of this in a story about women’s economic autonomy—nearly every ex-husband in this show is unemployed, penniless and extorting his super-wealthy ex-wife for cash—in the end, its point of view seems to mimic that of the divorce lawyer Abby hires in the second episode, who tells her that for a woman to earn more than a man is “unnatural.” (As my editor points out, it also works as a weird 21st-century inversion of The First Wives' Club.)

But there’s something raw in here: something weird and personal and ugly being diffracted through a whole lot of worn-out “women’s entertainment” conventions. Abby is a woman who tried, for her whole life, to embody the feminine ideal—happily married, a fantastic mother to two angelic children, successful at work, and still sexy to boot!—on a national stage. Because that ideal isn’t attainable, by anyone, she’s being punished by both the public and her loved ones for “failing.” (Again, the show has some powerful moments. When her brother tells her that her marriage isn't that bad, because “no-one was getting hit,” Abby's response – “I'm sorry I didn't get hit. I know that's hard for you” – lands hard.) And this injustice hasn't just left Abby heartbroken: She’s enraged. I sincerely doubt that story can be told effectively in Girlfriends’ current form. But if it can ever stop trying to be Sex and the City, or some even-less-real version of Real Housewives, it will have a story to tell. I just hope it gets there.