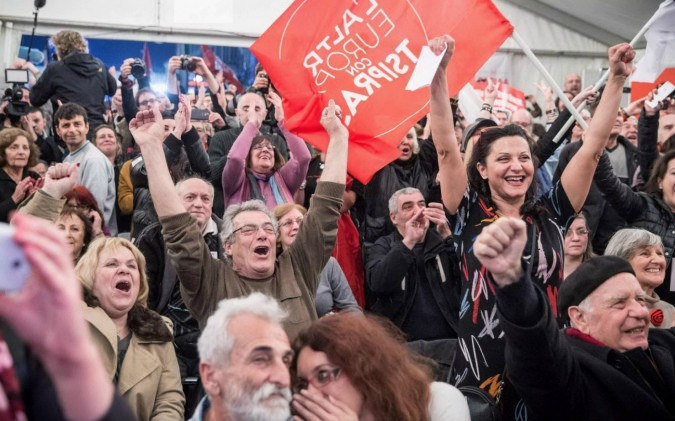 While European austerians clutch their pearls in horror at the Syriza victory, scribes for the U.S. establishment are seeing to it that progressive voices stateside face similar marginalization.

The function of the corporate media is to establish and patrol the boundaries of acceptable political thought and to marginalize those leaders who call for meaningful alternatives to business as usual.

A prime example: the coverage of the January 25 Greek elections, in which 36 percent of Greeks put their trust in Syriza, handing the party 149 of the 300 seats in the Greek parliament.

Reporting in the New York Times, Jim Yardley wrote that Syriza leader Alexis Tsipras, the new prime minister, had “unveiled the first government led from the far left in the country’s modern history … dominated by members of his radical-left Syriza party, among them academics, labor activists and human rights advocates. … Political opponents have warned that Syriza’s leftist roots would infuse Mr. Tsipras’s government with a populist, radical agenda.” Yardley doesn’t explain what is worrisomely radical about Syriza, other than that its agenda includes “renegotiation of the tough terms of Europe’s 240 billion euro bailout of Greece … which have crippled the Greek economy and contributed to rampant joblessness, foreclosures and shuttered businesses.”

Sounds like a commonsense proposal. Paul Krugman, so often a lonely voice of reason, wrote on his Times blog, “Although many of the press reports describe Syriza as ‘far-left,’ it’s actually preaching fairly conventional economics, while the supposedly responsible officials of Brussels and Berlin have been relying on radical doctrines like expansionary austerity.”

While European austerians clutch their pearls in horror at the Syriza victory, scribes for the U.S. establishment are seeing to it that progressive voices stateside face similar marginalization.

To visually portray where Warren stands in the American ideological landscape, on February 1 the New York Times featured a bar graph displaying the spectrum of American politicians. Warren was positioned to the far left of the graph, with her supposed counterpart on the far right being Sen. Rand Paul, a Tea Party darling who believes that blastocysts are people. Interestingly, the Times’ bar graph placed Warren even farther to the left than it placed Rand Paul to the right, while New Jersey Gov. Chris Christie was the politician placed closest to the center.

The message to readers is clear: Warren is every bit as kooky as Rand, Son of Ron. It matters not that her economic program is in line with the New Deal consensus that dominated mid-twentieth-century politics.

Clearly, media elites were most comfortable with the politics of the 1990s, when notions of social democracy and economic justice were set aside in favor of a market-based “post-ideological” program (which has greatly benefited the very rich, while leaving the working and middle classes behind). But, from the Greek voters to the surging throngs in Puerta del Sol in Madrid, the peasants have had it with the technocrats. Let’s hope that some of those breezes from the Acropolis make it to our shores.