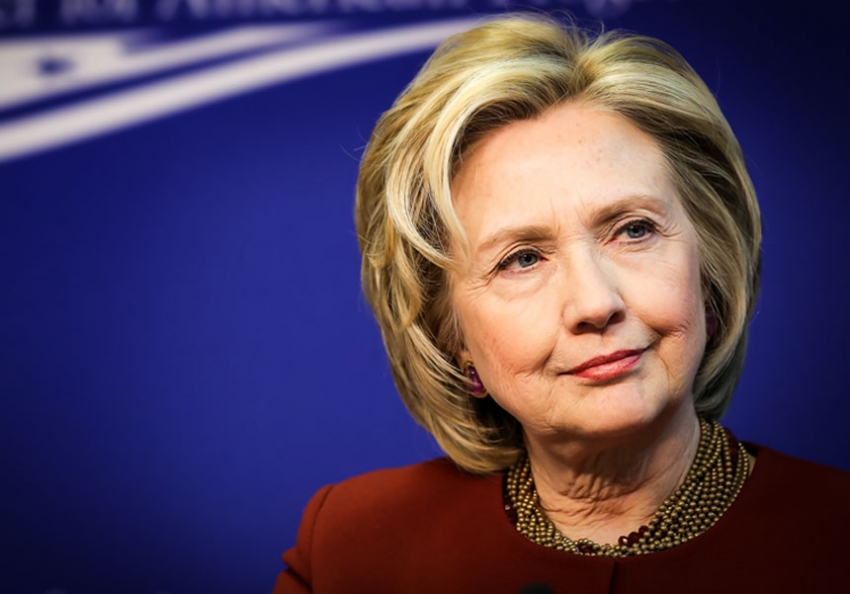 Hillary Clinton’s email scandal was a cold reminder of why she’s been so disliked. (Win McNamee / Getty Images)

Ready for a Woman, But Not Hillary Clinton

She may be a feminist, but Hillary Clinton’s policies and demeanor fit nicely with the old boys’ club on Capitol Hill.

We may hold Hillary, the feminist, to a higher standard. After all, feminist politics has meant challenging patriarchy: trying to bring equity to family life, humanizing the workplace, prioritizing women’s issues in politics, exposing violence against women, and confronting the dangers of militarism and imperialism. It has not meant adopting the stereotypically male traits and behaviors so interwoven with tough-guy policies.

Whether or not the email controversy surrounding Hillary Clinton will matter nine months from now, it threw some of us back to a place we didn’t want to go: wishing someone else might be the one to become the first woman president. Reports surfaced that she had used her personal email account for State Department business, allowing her considerable control over her email records. In a defensive press conference, a somewhat haughty Clinton said the main reason for this practice was “convenience” and that she and her attorneys would decide which emails to release.

As various commentators have pointed out, Maureen Dowd most scathingly, Hillary’s handling of the email controversy has reminded people of her prickliness, her sense of entitlement: “You seemed like an annoyed queen, radiating irritation at anyone who tried to hold you accountable.” As this gendered criticism suggests, Dowd has it in for Clinton: Last June, Media Matters analyzed 195 of Dowd’s columns on Clinton since late 1993 and found that 72 percent of them were negative, casting her as power-hungry, a phony and a betrayer of feminism.

Unlike Dowd, I have been less concerned about Clinton’s personality and more worried about her pursuing center-right policies at home and abroad. Nonetheless, rightly or wrongly, many of us do make a connection between a tough, seemingly unfeeling public persona and tough, unfeeling public policy, even when it comes to male politicians—Chris Christie, for example, seems a bully with hardline policies.

And we may hold Hillary, the feminist, to a higher standard. After all, feminist politics has meant challenging patriarchy: trying to bring equity to family life, humanizing the workplace, prioritizing women’s issues in politics, exposing violence against women, and confronting the dangers of militarism and imperialism; it has also come to mean battling racism, homophobia and environmental disaster. It has not meant adopting the stereotypically male traits and behaviors so interwoven with tough-guy policies.

Hillary’s imperious press conference performance brought back memories. She voted for the Iraq War, voted to label Iran’s Revolutionary Guard Corps a terrorist organization (which Joe Biden and other Democrats voted against), and criticized Obama for not being tough enough with Syria. When she was First Lady, the closed-door meetings she held as head of the healthcare task force generated considerable controversy and prompted a major stakeholder—the Association of American Physicians and Surgeons—to sue to learn who, exactly, belonged to this group that was going to shape their lives and work. In 2007, Clinton caved to attacks from conservatives and scuttled her family-friendly proposal for a “baby bond”—$5,000 given to every American at birth that could be invested for a college education, or a home. And she has spent a great deal of time behind closed doors with wealthy donors rather than with regular voters.

While I doubt most Americans revisited any of this, the scandal has hurt her. A late March CBS poll showed her approval rating down 12 percentage points since November 2013, to 26 percent, with 47 percent saying they do not see her as honest and trustworthy.

Now, given where we are—a Congress that is 80 percent white and 80 percent male, an infant mortality rate higher than that of 27 other wealthy countries, over five million more women than men living below the poverty line, women holding only 4.8 percent of CEO positions in Fortune 500 companies—aren’t we overdue for a woman president? Yes, but not just any woman (think Sarah Palin): one with genuine feminist and progressive sensibilities. For many of us in Clinton’s generation, feminism did not mean trying to be more like men.

I have little doubt that Clinton, if elected, will play hardball with the Republicans more determinedly than Obama did in his first six years; indeed, that’s what her press conference suggests. But we are now reminded of a seeming coldness there, an opportunism, a lack of empathy with the 99%, and a failure to channel female compassion (however socialized, of course). If we are going to have a female president, many of us would actually want her to not be like a man, but instead to bring a truly feminist sensibility to healing our country from, yes, the ongoing, utterly destructive wages of patriarchy.