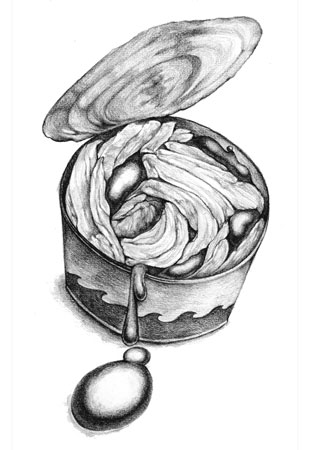 Last spring, I received a tantalizing invitation from the editor of Childbirth Forum: write a story on mercury in fish and the resulting risks to pregnant women. This was a topic dear to my heart. During the four years I researched fetal toxicology at Cornell University, I had become alarmed about the breach between what the scientific community knows about the effects of prenatal mercury exposure (a lot) and what the general public knows (very little).

Pregnant myself during some of this time, I experienced this disconnect directly. I spent one Valentine’s Day poring through the data that inform the Food and Drug Administration’s ongoing recommendation that pregnant women avoid swordfish. Then I joined my husband for a meal in a nearby restaurant. I was hardly seated when the waiter suggested to me—so pregnant I couldn’t pull my chair up to the table—the swordfish special. Behind the bar was a sign warning pregnant women that alcohol can cause birth defects. No sign appeared in the menu warning pregnant women that mercury in certain fish can cause fetal brain damage.

The book I eventually wrote on environmental threats to pregnancy devotes two chapters to mercury. It was this book, Having Faith: An Ecologist’s Journey to Motherhood, that prompted Alice Berman, editor of Childbirth Forum, to solicit my article.

I said yes. Sponsored by Pampers diapers, the magazine has a print run of 20,000, and most of its readers are nurses who work as childbirth educators, an audience I had long wished to reach. So, with my own childbirth instructor in mind, I traced the flow of mercury through the human food chain, starting with its introduction into the atmosphere and ending with its presence in tuna fish sandwiches. I finished my story before the deadline. The editor liked it. It went out for external review. The reviewers liked it. The story was accepted for publication.

At about the time I started checking my mailbox for copies, I found out my article would not be published after all. In an apologetic e-mail, Berman forwarded me the following message, which she said she had received from the group that handles the publication’s production: “Although the feature is relevant, well-researched, and well-written, it cannot be used for Childbirth Forum at this time based on a directive from the newsletter’s sponsor, Procter & Gamble. … The information about mercury and fish must be written about in a larger context of diet during pregnancy, and is too ‘controversial’ to feature as it is.”

I’m a biologist. I always thought that the food chain was our diet. But maybe I’m missing something. You tell me. Here is the story, “Mercury in Pregnancy: Eat Fish With Caution,” that Procter & Gamble doesn’t want the teachers of pregnant women to read:

Fish is the last form of wildlife many Americans still eat. Those who seldom dine on stewed squirrel or venison may be very familiar with tuna salad.

And fish is good food. It is low in saturated fat and high in protein. It is also a leading source of omega-3 fatty acids, which reduce blood pressure. These same nutrients help build healthy brains in our children. During the second half of pregnancy, when the fetal brain undergoes a big growth spurt, omega-3 fatty acids are required for the proliferation of fetal neurons and blood vessels.

But eating fish is also the leading route of exposure to methylmercury. Women who eat fish more than twice a week have blood mercury levels that are seven times higher than women who eat no fish. And mercury, like lead, is a terrible saboteur of fetal brain growth. The U.S. Environmental Protection Agency (EPA) recently estimated that as many as 630,000 infants, or roughly one in every six U.S. babies, are born each year with unsafe levels of methylmercury in their blood. These revelations have ignited a fiery debate both about fish consumption during pregnancy and about how best to get mercury out of the environment in the first place. [Author’s update: The EPA has taken pains not to adopt the 630,000 figure as its official position. Calculated by EPA scientist Kathryn Mahaffey, this estimate was published in Environmental Health Perspectives, April 2004.]

As a vapor, mercury circles the globe for up to a year, coming back down to earth with rain or snow. Once it lands, mercury is attached to carbon atoms by bacteria. This chemical transformation turns elemental mercury into a highly potent neurotoxin called methylmercury, which is the form of mercury found in fish.

Fish are vulnerable to methylmercury contamination because watery environments enhance the ability of this organic metal to biomagnify—meaning that it concentrates as it is siphoned up the food chain.

In water, toxic substances like methylmercury can reach higher levels because food chains are longer than they are on land. Terrestrial food chains rarely have more than three links. Aquatic ecosystems can easily support food chains with six links, and some have as many as twelve. Thus, a top predatory fish, like a tuna, can easily have sequestered in its flesh methylmercury levels that are a million times higher than the water it swam in.

The placenta, which works well to bar pathogens from entering the womb, does a terrible job of keeping methylmercury out. In fact, the placenta actively pumps mercury into the fetal capillaries as though it were a precious molecule of calcium or iodine. This is why levels of mercury in the blood of a newborn typically exceed those of its mother by 70 percent. When confronted with methylmercury, the placenta functions more like a magnifying glass than a barrier.

Once inside the fetal blood supply, mercury is carried to the fetal brain, where it interferes with brain cell migration. Just as a spider can lower itself from the ceiling by reeling out a single strand of silk, a fetal brain cell moves from the center of the brain to the surface by rappelling along its own fiber. This process of brain cell migration begins in earnest during month four of pregnancy and continues after birth at least through the age of two.

Methylmercury paralyzes migrating brain cells and thus interferes with their movement from center to surface. Methylmercury also halts cell division in the fetal brain by binding directly to neural chromosomes. The cerebellum—center of balance and coordination—is a special target of methylmercury. Prenatal exposures to methylmercury have also been linked to deficits in memory, learning and attention span that persist into adolescence and appear irreversible.

In short, human fetuses are more vulnerable than adults to the brain-addling powers of mercury for two immutable reasons: They receive a comparatively bigger exposure (because of the placenta’s concentrating powers), and their brain cells need to move and multiply.

No federal laws presently require existing power plants to control mercury emissions. In fall 2003, an EPA advisory committee considered regulations that would require cuts of 90 percent by 2008. But the Bush administration scrapped this approach and has suggested far more modest cuts that would allow six times more mercury to enter the environment than the original, more stringent plan. [Author’s update: What continues to anger critics about the Bush plan is its departure from maximum achievable control technology (MACT) standards, to which the EPA had previously committed itself. If faithfully implemented, many argue, MACT standards would afford a 90 percent reduction in mercury emissions.]

At this writing, several states’ attorneys general are expected to submit rebuttals to the Bush plan. [Author’s update: These have been submitted.]

Whatever the outcome of this struggle, mercury in fish is not going away soon. Therefore, it is left to federal and state agencies to make recommendations about fish consumption during pregnancy. The Food and Drug Administration (FDA) now advises pregnant mothers to eat no more than two six-ounce cans of light tuna a week (or no more than one can of albacore tuna). Swordfish, shark, tilefish and king mackerel are to be avoided completely. Altogether, says the FDA, a pregnant woman should limit her weekly fish consumption to 12 ounces. Shrimp, pollock, salmon, or catfish are low-mercury fish and are therefore good choices. [Author’s update: For the FDA’s current guidelines, see www.cfsan.fda.gov/~dms/admehg3.html.]

Nevertheless, many public health experts argue that these new guidelines are still not sufficiently protective of fetal brain development. In February, leading health, consumer and environmental groups sent a letter to the FDA urging stricter restrictions on the fish consumption of pregnant women. One of the FDA’s own committee members resigned in March 2004 in protest over the new guidelines which, he argues, are too lax. [Author’s update: The July 2004 issue of Consumer Reports advises women to eat no more than three ounces of albacore tuna each week. This is half the FDA’s recommended weekly limit.]

Meanwhile, because of rising mercury levels, sport-caught freshwater fish remain off limits to pregnant women in most states. These advisories are promulgated by state environmental agencies and are under almost continual revision. One continuously updated source for learning about these various guidelines is the Web site of the non-profit institute Mercury Policy Project: www.mercurypolicy.org.

My editor said she received no specific explanation as to what made the above article objectionable to Procter & Gamble. The Natural Resources Defense Council (NRDC), on the other hand, did have some clues to offer. According to the director of the Environment and Health program at the NRDC, Dr. Linda Greer, Procter & Gamble has been active in opposing mercury regulations. For example, Greer said, when the state of Maine was creating legislation several years ago that would authorize its hospitals to collect information on mercury use, the company went straight to the governor’s office to complain.

The NRDC is involved in the ongoing lawsuit that challenges the EPA’s regulations for the chlor-alkali industry (see paragraph 4 above).

One product of that industry is caustic soda, which is used in the manufacture of soap and detergent as well as in the pulping of wood fibers for paper products. Procter & Gamble—whose other brands include Tide, Cheer, Ivory Soap, Puffs and Bounty—is a big consumer of caustic soda. Does the company purchase its caustic soda from any of the many mercury chlor-alkali plants here and around the world? Greer did not know. Chemical chains of custody are carefully guarded industry secrets.

Certainly Pampers is a major advertiser in parenting and baby care magazines. Could the cuddly diaper ads in their pages have anything to do with the public’s lack of knowledge about mercury-contaminated fish? Only Procter & Gamble knows for sure.

The author dedicates this essay to Mary Beth Doyle, MPH, who worked passionately to keep mercury and other pollutants out of the diets of women and children. Mary Beth died on November 13 in an automobile accident near her home in Ann Arbor, Michigan.

Biologist Sandra Steingraber is a visiting distinguished scholar at Ithaca College in Ithaca, New York. Her most recent book is Having Faith: An Ecologist’s Journey to Motherhood.