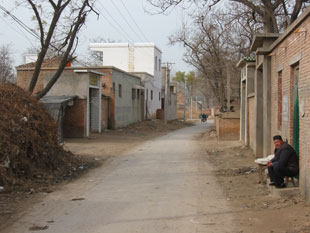 The streets of tiny Nanren village in China's Henan province are still empty as locals recover from the shock of ethnic riots between local Han Chinese and Hui Muslims that killed more than 100 people and injured more than 400 people this October.

The silence in this dusty brick-making town seems idyllic. But it’s really the calm after a storm—a storm that residents fear will soon return.

“Everyone here’s gone mad. … people who used to live together now want to kill each other,” says a local restaurant owner who would give his name only as Mr. Ma. “I’m worried that when the police leave the fighting will start again.”

On October 28, this small village of about 1500 Han Chinese and 500 Hui Muslims in China’s central Henan province exploded into violence after a minor altercation between members of the two communities.

Little has been reported on the flare-up. The government is determined to suppress news of the riot because “it wants to preserve the image that all minorities live happily in China,” says Ma. While more than 90 percent of China is Han, the country has more than 50 ethnic minorities, including different Muslim groups, Tibetans, Koreans and Mongolians.

Ma, a Hui, said the violence broke out after a Hui man was attacked by Han locals. Han Chinese in the area say the man was beaten after he knocked down a Han girl with his vehicle and refused to pay compensation.

Fighting between the two communities raged for hours, Ma says, leaving more than 100 dead, more than 400 injured, and several houses and vehicles burned.

Word of the riot spread quickly in the region, threatening to draw thousands more into the frenzy, thanks to the cell phones and computers proliferating even in rural China.

“Thousands of [Han] people surrounded [Nanren village] with bulldozers and tractors and wanted to smash all the Hui houses,” says Zhujian Jun, 32, a carpenter in Zhongmou, a town about 20 miles south of Nanren.

In Ji Yuan, about 80 miles to the west, “thousands of Hui people were getting into trucks to go join the fight,” says Yuan Peng, a Hui man in Ji Yuan. Rumors also spread about a planeload of Huis flying in from the northern province of Ningxia, an officially designated Hui autonomous region, where about 2 million of China’s 8.2 million Hui live.

Local authorities moved quickly to quell the violence, but it was so ferocious that at least 15 policemen were killed before officials called in special paramilitary troops, sources say.

Now surveillance vans still patrol the area and a large blue sign assures locals that a special detachment of the police is working to clear up the problem.

That’s the most public concession that anything is amiss here.

Chinese media have hardly reported the violence, and foreign journalists are still banned from entering the area. Those caught trying are detained by authorities. Local residents have also been explicitly warned against talking to journalists, Ma says, to explain why he kept glancing out at the street as he spoke.

With the area isolated from the outside and the government seen to be sweeping things under the carpet, both Han and Hui communities in the area continue to seethe.

“We’re good Muslims but the Han people don’t understand us,” says Yuan Zong Qing, a truck driver in Ji Yuan. “They have complicated ways and try to impose this on us. Our children cannot learn the Koran in school, and it’s hard for them to even observe Ramadan. Some [Han Chinese] offer us pork and intimidate us and pressure us to keep Chinese names.” Yuan prefers to call himself by his Arab name, Mohammad Dawood.

In Zhongmou, a Han carpenter named Wang Tong Bin says he’s “always hated” the Hui because they’re “arrogant, aggressive and clannish. They have this group mentality, so if one Han person offends a Hui person, a lot of Hui will collect to take revenge.”

Such bitterness, prejudice and anger is grinding away at China’s steadily fraying social fabric. Almost 60,000 protests occurred around the country last year, the government says, more than five times the number that occurred a decade ago. Given local governments’ reticence in reporting such information, the real number could well be higher.

For example, there was a Hui-Han riot in Zhongmou just this summer, says Wang Chao, a retired Han mill worker in the town.

“The city hasn’t recovered yet,” he says from the back seat of his car, the only place he agreed to speak. “Just look around you. All the Hui restaurants are empty because people aren’t supporting their businesses.”

Many of the Han taxi drivers and hawkers in the town, who work late into the night, say their wives now insist on coming to work with them, for fear of Hui reprisals.

Such unrest is rooted in an increasing alienation amongst people who feel sidelined by the government’s single-minded pursuit of economic growth and the resultant increase in inequality, autocracy and corruption, says Jiang Yang, 42, a business executive in Beijing.

“In this hostile, strained environment it’s only natural that ethnic relations will also decay,” Jiang says. “Today Chinese people have nothing to believe in. … some are reaching for religion and some have made money their God.”

Indeed, money and faith appear to be the primary causes of Hui-Han tensions.

The Chinese government has long tried to mollify its potentially restive minorities with sops such as jobs preferences and other affirmative action-type schemes. But with unemployment rising, particularly in the rural central and western provinces, the Han majority is increasingly resentful.

“Everyone should be equal in our society,” says Wang, the carpenter. “If the Hui are really as superior to us as they claim why do they need extra things from the government?”

Ma scoffed at the idea that the Hui received any real benefits from the government. “If that’s so, why are all the men inside the vans Han and not Hui?” he asks, pointing to the street outside where police surveillance vans trawl the streets looking for troublemakers.

Hui men often complain that they and other Muslim minorities have few “real jobs,” and are limited to owning restaurants in the local “minority street,” where they serve patrons piping-hot kebobs and flaky nan bread.

But there is no doubt the Hui now enjoy far more religious freedom than they did in the first decades of Communist rule, when the Party repressed practice of all faiths.

“People [now] come in droves to pray five times a day … and we are even getting new converts,” says Lu Da Zhe An, a cleric at the newly built Arabian-style mosque in Shui Yun, a Hui village not far from Nanren.

Ironically this relatively greater religious freedom is also heightening differences between Han and Hui, says Mai Bao Guang, a local butcher in Shui Yun. He, like many Hui, has recently taken to wearing a beard and an Arabic-style white prayer hat.

According to Mai, such increased devoutness and the Huis’ tendency to congregate in and around mosques has made them seem even more clannish to many Han Chinese.

Such social tensions, in combination with other political unrest, are ringing alarm bells in the corridors of power where “maintaining social stability” is the holiest of official mantras—not surprising in a nation almost destroyed by social tumult during the last century.

Alarmed Communist Party of China elders have responded the only way they know—by directing officials to be more responsive and considerate in their governance.

But Chinese and foreign political analysts in Beijing say that’s not enough. Since the Chinese government has only recently withdrawn from many spheres of public life, Chinese society hasn’t really had a chance to learn how to manage competing social interests. So the grassroots mechanisms that open societies rely on to sort out similar ethnic or social tensions must be given time and support to develop, says Chen Xin, a professor of sociology at the Chinese Academy of Social Sciences.

From the back of his car Wang, the mill worker, says his life seems to be gradually spinning outside the government’s, and his, control. “I have a Hui friend and we used to eat and go out together,” he says. “Now I’m not sure if I can. I don’t want things to change, but I can’t help it if they do.”