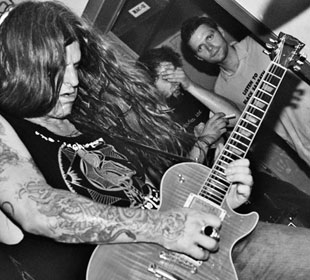 Pity poor Tom DeLay. Not only must the House Majority Leader suffer the snipings of Democrats hot to find him guilty of “ethics violations,” he has now become the target of a heavy metal hex.

“The Deprogramming Of Tom DeLay,” an instrumental track on the album Mother Teacher Destroyer from Maryland-based trio the Hidden Hand, is a straightforward magical assault, half a ton of chthonic sludge aimed directly at DeLay’s biblically buttressed psyche. Gongs, drones, pummeled drums and a huge riff from the guitar of Scott “Wino” Weinrich cast the spell.

Will it get the job done? Get behind the oily twinkle of the DeLay face, beneath that immobile hair? We may never know, but at a moment when a large portion of America appears to have voted not with its head or even with its wallet, but with some part of its reptilian brain, this dark wordless noise is more eloquent—as protest music—than 100 “Blowin’ in the Winds.”

Mother Teacher Destroyer is not all noise. Guitarist/vocalist Wino and bassist/vocalist Bruce Falkinburg, along with drummer Dave Hennessy, play fluid, devastating hard rock, with a power trio’s thick-toned groove. This year Guitar World magazine named Wino #64 in their list of the Top 100 Metal Guitarists—oddly, because it is impossible to imagine 63 better players than Wino. He’s a miracle of a guitarist who takes the monolithic low-end sound of Black Sabbath’s Tony Iommi and twists it into his own downward-flowering psychedelia. His tone is immediately recognizable, and unfakeable; Henry Rollins has likened it to “drinking Clorox all night long.”

As a vocalist, too, he’s a thriller, with an old-school warlock’s wail. Lyrically, Mother Teacher Destroyer ranges through the head-on Bush-bashing of “Travesty As Usual” (“Based on cold ideology/ Face of lies and hypocrisy”) to a more encrypted, oracular attack (“Earthly winds divide, Goddess heralds near/ Early frost arrives, destiny is clear.”).

The Hidden Hand seem, then, an anomaly: a thinking heavy metal band. Which is not to say that metalheads are necessarily unintelligent, but that metal itself is pre-intelligent, a rough religious beast, hooked up to the uncensored and irrational, the lower systems of consciousness; from metal we tend to expect brute energy and the smell of brimstone and little else. If, say, Slayer exhorted their listeners to read Edward O. Wilson’s The Future Of Life along with Greg Palast’s The Best Democracy Money Can Buy, as the Hidden Hand did in the liner notes to their 2002 album Divine Propaganda, we would be shocked. If Metallica’s Lars Ulrich paused from bashing Napster to cogently denounce the Iraq war—as Wino has capably done—we would revise our opinion of the man.

And yet the Hidden Hand’s critique of power, upon examination, leads straight back into the metal primordium. To begin with, they are adepts of conspiracy theory, obsessed with information, disinformation, propaganda and its country cousin, mind control. Also recommended in the liner notes to Divine Propaganda is And The Truth Shall Set You Free by David Icke, a former BBC sportscaster who notoriously robed himself in turquoise and proclaimed himself the Son of God. Icke (who later changed his mind about being the Son of God) is a busy and productive conspiracy theorist, attributing most of the world’s problems to a family of blood-drinking lizards who start wars, run all the banks and prevent us from opening the “vibrational prison door.” George Bush is one, as was England’s Queen Mother. (Icke has also been accused of anti-Semitism, a charge he meets by insisting that he is talking about lizards, not Jews.)

That the Hidden Hand should be using a rogue metaphysician like Icke as raw material is perfectly heavy metal, of a piece with their interest in alchemy, archetypes, mythology, the whole whirling stew of arcana that saturates their imagery and sound. This is not well-lit, secular music—but how else are you going to deprogram Tom DeLay?