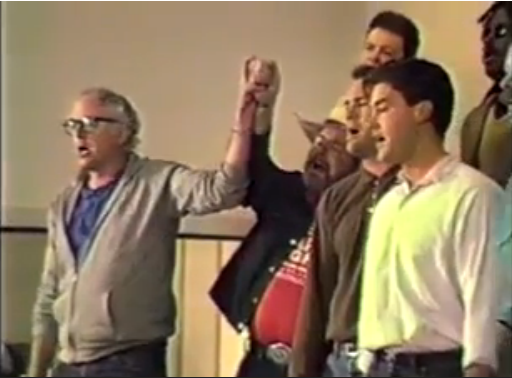 A 1987 episode of Sanders’s public access television show, Bernie Speaks, provides a look at the presidential candidate’s musical side.

The 1980s were Bernie Sanders’s heyday as mayor of Burlington, Vermont. In his free time, he also filmed a public access television show known as Bernie Speaks: The Mayor’s Show.

The show, like most public access shows, contains some perhaps unintentional comedy. In 1987, Sanders recorded a folk album and decided to showcase the recording process on an episode of Bernie Speaks. With close up shots of notecards and 1980s animation, the episode opens onto a scene of chorus members with big hair, a producer wearing a hideously ugly sweater and Sanders excitedly running around in a sweatshirt and jeans.

First dug up by Buzzfeed’s Andrew Kaczynski, the episode captures Sanders holding hands with one of his fellow chorus members and soulfully recording the track “Oh Freedom.” We even see Sanders trying his hand at directing the chorus members.

As with most interactions with the socialist senator, the episode does hit a serious note, discussing issues like censorship and inequality. But it also gives a view of a young Sanders joking around while creating something that he believes in.

“When music or poetry comes from people, I think almost by definition, that’s good. It seems to me there’s very, very little of that is going on today,” he says during the episode. The seriousness is diluted by producers joking about his musicality (or lack thereof).

The 30-minute episode comes to an end with Sanders rousingly and passionately proclaiming (while recording the spoken word component of the album), “Freedom, dignity, the willingness to stand up against the mighty and the powerful!”

You can watch the episode here.