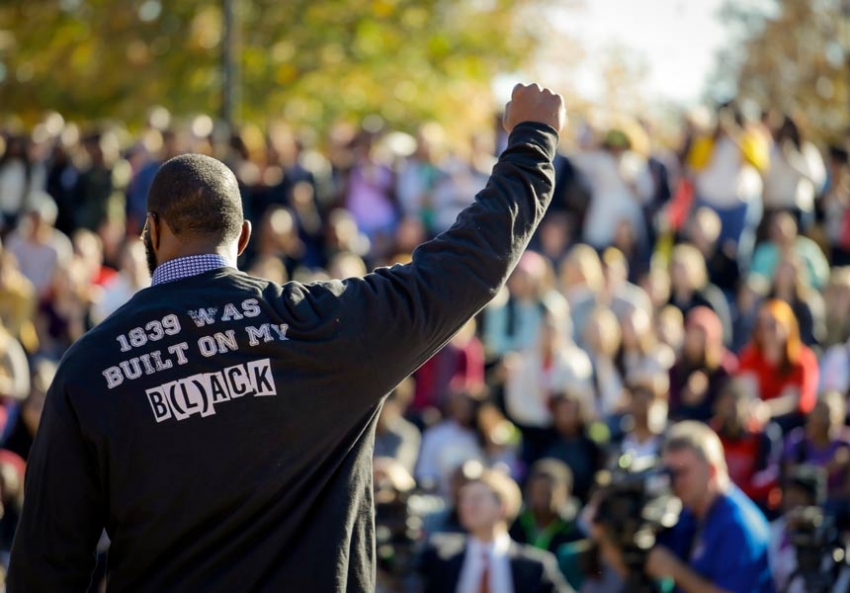 Free Speech In an Age of Campus Protest

How the media can work for, and against, the wave of anti-racist actions by students

In November 2015, protests demanding institutional change in response to repeated racist incidents on the University of Missouri campus in Columbia, Mo., spread around the country under the banner of #BlackOnCampus and #StudentBlackOut.

On Nov. 9, 2015, University of Missouri system President Tim Wolfe resigned. His resignation came after sustained activism throughout the fall semester by Mizzou students calling themselves Concerned Student 1950 (the year that the university admitted its first Black student), a hunger strike by graduate student Jonathan Butler and a boycott by members of the school’s football team.

On the day of Wolfe’s departure, a video went viral showing University of Missouri Assistant Professor Melissa Click calling for “some muscle” to keep journalists from covering the student protest encampment on the school’s Carnahan Quad. Much mainstream media attention shifted away from student demands to journalists’ First Amendment rights to report in public spaces.

To go beyond the headline-generating viral video, In These Times invited three people to discuss connections to the broader Black Lives Matter movement, how journalists can build trust with communities of color and where the movement might go in 2016: Yamiesha Bell, a graduate student at the University of Connecticut and organizer with the Black Liberation Collective (BLC); Sandy Davidson, a Curators’ Teaching Professor at the University of Missouri School of Journalism and attorney for the Columbia Missourian, the Missouri School of Journalism’s newspaper; and Asha Rosa, a Black queer writer, student at Columbia University and co-chair of the NYC Chapter of Black Youth Project 100.

What did you all make of the Missouri students and professor who attempted to prevent journalists from documenting their protest?

SANDY: After the incident with Professor Click, the media flipped the attention, and it became a question of First Amendment rights and photojournalists. But this university is home to the first journalism school. So we had some conflict. Part of the difficulty in Missouri was that a photojournalist from our school was assigned to document something that was historical and newsworthy, that was taking place in a public space. I regret that the students didn’t take the opportunity to get their message out.

ASHA: Black people have our rights violated all the time. Part of protest is taking over spaces and setting the terms of how the space is going to be used. Black organizers are working toward their own self-determination, and if they’re going to set certain rules, they don’t necessarily need to explain to people why. They don’t necessarily have to obey all of the laws. The police certainly aren’t.

YAMIESHA: I don’t blame the students at Mizzou for telling the journalists, “This isn’t your space.” Because that really wasn’t their space.

How can we keep the focus on issues of racial equality?

ASHA: We need to connect experiences of racism on college campuses to the racist violence that those same institutions let happen. At Columbia, we see the university working with the NYPD to police folks in West Harlem. That impacts Black students and the Black people that Columbia is trying to push out of this neighborhood.

YAMIESHA: That responsibility unfortunately falls on students of color. We have to ensure that these topics are not only just talked about but acted on. Higher education was never meant for people of color. That’s clear in the policies and the practices that we experience today.

SANDY: It’s not just students’ responsibility—it’s faculty’s, too. Mizzou held a “teach-in” where 11 Black faculty members shared their experiences with racial inequality, then students and faculty got to ask questions. That’s the kind of conversation we should be encouraging on college campuses.

YAMIESHA: You can put as many Black presidents into leadership as you want, but if the system is bad, if the practices are bad, it won’t matter who you have in leadership because higher education is inherently racist and sexist and homophobic and transphobic.

Sandy, in a Chronicle of Higher Education article you are featured in, you mentioned you start and end your classes saying “knowledge is power.” What exactly does that mean?

SANDY: It means that you know your rights so that when you speak, you speak on authority. So if somebody is trying to shut a journalist down, and say you don’t have the right to do that, the journalist can say, “Oh yes, I do.”

ASHA: I’ve found that it’s really hard to facilitate a workshop in a room full of Black folks who’ve experienced unlawful police harassment and say, “This is what the law says.” It’s one thing to know the “rights” you have according to the law. It’s another thing to have the power to demand they be respected. Knowledge is important, but to argue that it’s the same as power would imply that Black people are oppressed because we are uneducated or unaware. Knowledge can open our eyes to the fact that we need to build power, but it will not free us alone.

Why are safe spaces important for movements?

YAMIESHA: Safe spaces allow you to be happy and be free, and not to have to apologize for that. The first time I was in a safe space was an all-Black space that was intentional, I just cried, because I’ve never felt so much love and so appreciated just for me being me. It’s so important for Black folks to see what a safe space looks like and feels like in order to be able to say, “I deserve this every single day of my life.”

ASHA: We’re trying to manifest the world we want to see, and we’re trying to act that out by creating spaces where we agree to relate to one another in the ways that we want to. My whole community acts like my family. Because we don’t accept how things happen in society, part of the organizing is creating spaces that reflect our value. That’s been true throughout the history of Black organizing: People wanted integration, so they sat at the counter and acted out a world in which they legitimately could sit at the counter.

How can journalists do a better job of building trust with communities of color and other marginalized peoples?

SANDY: Training is so important. We have a multicultural class that all journalism students have to take. And we want to have journalists who are part of different communities.

ASHA: I don’t see journalists coming to organizers for quotes for context about the movement in the way they should. We need to dismantle this notion of an expert as being connected to a degree or some credential. People on the ground are experts of what’s going on.

Where will things go in the New Year?

ASHA: A national coalition is forming. Folks should expect national demands and a higher level of national coordination. We’ll be disrupting things on campuses. And our demands will include symbolic things but also structural shifts in how universities treat people of color on campus and how that relates to systems of policing and racism.

YAMIESHA: We need to fight white supremacy and anti-Blackness on every front. We’re building student power so that we can make those demands. This system wasn’t built for us, but we’re here now and we’re demanding to be safe in these spaces.

ASHA: Black student organizers are students now, but we’re going to be Black for the rest of our lives, and that fact is not lost on us as student organizers. From Black college students in the Ivy League to high school dropouts to incarcerated Black folks, this is one movement.

YAMIESHA: In BLC, we often use the quote, “We refuse to be your silent, respectable markers of diversity.” This is the year when students are collectively saying, “We’re not doing this anymore.” People talk about how we need reform, but reform isn’t enough. We need to get rid of the higher education system as it is and create a new one, because that system is not acceptable, it’s not accessible, and this is not a safe space for people of color. And that goes for a whole lot of other systems we have in place in this country and in this world.

Jill Hopke is Assistant Professor of Journalism in the College of Communication at DePaul University in Chicago. Her research focuses on participatory and networked uses of emerging digital and mobile media platforms, with an emphasis on the ways in which environmental activists use these tools.

We Need a Truth and Reconciliation Process for the Trump Era