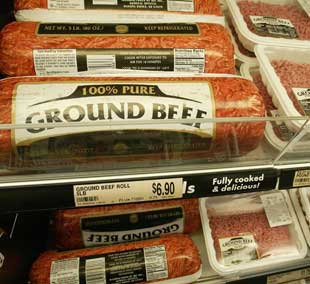 On January 2, Canadian officials announced that an Alberta dairy cow had tested positive for mad cow disease—the third time a North American bovine has been diagnosed with the neurological disease.

Most Canadians and Americans believe that their governments have taken the necessary measures to stop the spread of bovine spongiform encephalopathy (BSE), the scientific name for mad cow disease. For a decade the official line of both governments and the corporate meat and livestock industry has been that the disease could not occur in either country because of extensive safeguards such as the “1997 firewall feed ban” that officials claimed prevented the feeding of cattle protein to cattle, the means of infection for the deadly brain disease.

However, the regulations adopted by the United States and Canada in 1997 were too little and too late. For example, it is still legal in both countries to wean calves on formula containing cattle blood as a protein source.

Why have only three mad cows been discovered to date in North America? Both Canada and the United States have increased the number of cattle tested by each government for the disease, but the testing remains woefully inadequate by the standards of the European Union nations and Japan.

Of the 36 million cattle slaughtered in 2004 and put into the human and animal food supply, only 176,468 were tested. In at least three instances U.S. cattle have tested as possibly having mad cow disease on sophisticated “quick tests,” but further testing has led the U.S. Department of Agriculture (USDA) to announce the results to be negative. However, the government testing is secretive and suspect. No independent scientists or laboratories have reviewed or confirmed any of the suspected mad cows. Each time the USDA has announced a suspect cow the cattle futures market has been thrown into temporary turmoil, and the industry is pressuring the government to stop announcing suspect animals altogether.

It was private mad cow testing that eventually revealed the presence of the disease in Germany. So it is not surprising that when the Kansas-based Creekstone Farms Premium Beef company reached an agreement with Japan to sell beef that the company had tested to the Japanese, the USDA, invoking a 1913 law, warned that mad cow testing by private U.S. firms is illegal. Creekstone hoped to save hundreds of company jobs by testing its cattle and reopening its market with Japan.

The first rule of public relations in a crisis is to “manage the outrage.” The December 23, 2003, announcement of a mad cow in the United States resulted in a media feeding frenzy, but a well-prepared and coordinated USDA and industry PR campaign tamed it within weeks. Since then the media has primarily echoed soothing assurances by the secretary of agriculture and various industry-funded third-party voices such as the brilliantly named Harvard Center for Risk Analysis. Consequently, most Americans think that the necessary protective measures against mad cow disease have been taken, and there is not the public outcry, such as the one that took place in Europe, which might force the U.S. government to follow Europe’s lead and institute a total feed ban on feeding livestock to livestock, along with extensive animal testing.

As mysterious a killer as mad cow disease and its human equivalent, Creutzfeldt-Jakob disease (CJD) are, the steps needed to fix the problem are simple and straightforward. The disease is spread via an infectious protein dubbed a “prion” by U.S. Nobel Prize winner Stanley Prusiner. When infectious animals are fed to people and livestock, mad cow disease can be transmitted. Banning the feeding of livestock to livestock is the solution, but that deprives the livestock industry of a method to turn a waste product—slaughterhouse offal—into a valuable resource: livestock protein and fat supplements.

Had the United States heeded experts and implemented a British-style ban on feeding livestock to livestock, and tightened the ban further in 1996 when humans began dying, the mad cow crisis in the United States could have been averted. Instead, we now have mad cow disease in North America, calves in the United States and Canada weaned on cattle blood, and the Centers for Disease Control (CDC) quietly reviewing the mysterious deaths of young Americans from sporadic CJD to see if the cause of death might be eating U.S. mad cows.

Sporadic CJD is supposedly an exceedingly rare disease that kills, according to the CDC, maybe one in a million people. Reports of CJD deaths among people in their 20s, 30s and 40s have surfaced in the past five years in California, Utah, Oklahoma, Minnesota, Wisconsin, Michigan, New Jersey, Texas and other states. With a mad cow-type disease infecting U.S. deer, called chronic wasting disease, and U.S. sheep long infected with scrapie (the ovine form of mad cow disease), suspicions are growing that these diseases might be moving into the human populations. Yet, most human dementia deaths are not autopsied, and there is no nationwide requirement for mandatory reporting or investigation of CJD deaths.

Mad cow disease was never seen before 1985. It was not confirmed that humans were dying of it until 1996. No human mad cow disease spread through blood transfusions was documented until 2003, the same year that the first two cases of mad cows were confirmed in North America.

One of the biggest mysteries of these related diseases is the existence of different strains, and the way new strains emerge when one strain moves into a new host, as happens in laboratory tests or when a so-called species barrier is jumped via the consumption of contaminated feed or an infected animal.

A worst-case scenario can be imagined, and should inform the actions of governments. For example, mad cow disease does not appear to spread from animal to animal. But the equivalent disease in North American deer and elk, chronic wasting disease, does appear to be horizontally infectious. One deer can apparently infect another through saliva or feces. The nightmare: the emergence of a fatal human dementia spread through kissing.

John Stauber is the founder and executive director of the nonprofit Center for Media and Democracy in Madison, Wisconsin. He is the co-author with Sheldon Rampton of Weapons of Mass Deception: The Uses of Propaganda in Bush’s War on Iraq (2003) and Mad Cow USA (1997).