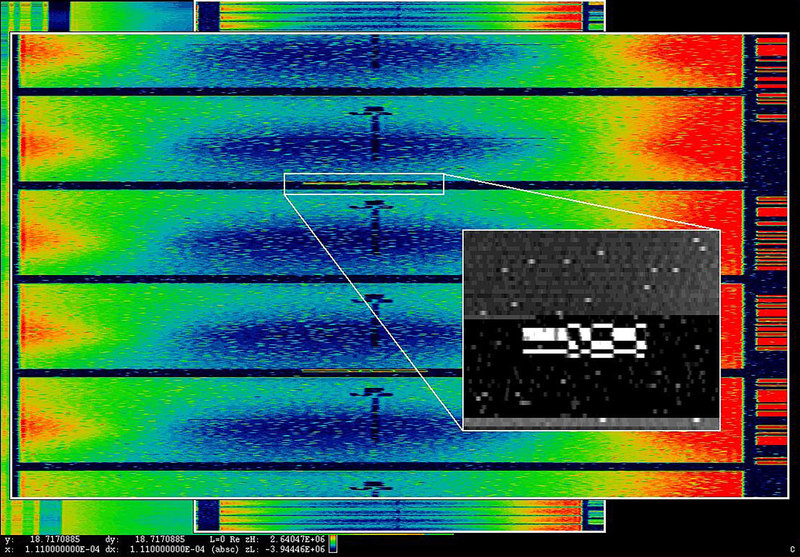 Poitras created a visual representation of an Israeli drone feed that her colleagues at The Intercept reported on just before Astro Noise’s opening. ("ANARCHIST: Israeli Drone Feed"; courtesy of the artist).

In a piece titled November 20, 2004, Poitras releases selections from her own FBI files, which she received via FOIA request.

Discussions of the surveillance state tend to be cerebral, but in Laura Poitras’ new exhibition at the Whitney Museum of American Art, Astro Noise, surveillance is made intimate, and all the more disturbing.

Astro Noise is the first fine art project by the documentary filmmaker and reporter best known for Citizenfour, her Academy Award-winning film depicting Edward Snowden’s reveal of NSA secrets in a Hong Kong hotel room. The tense, claustrophobic film was the final installment in Poitras’ trilogy on post–9/11 America. It followed 2006’s My Country, My Country, documenting Iraqi life under US occupation, and 2010’s The Oath, which followed two men who worked for Osama bin Laden, one as his bodyguard in San'a and the other as his driver in Afghanistan.

The Whitney Museum is a tremendous platform, one that Poitras could have used in confrontational or immediately thrilling ways; instead, and for the best, there are no shouts or slogans, just dim, unsettling spaces for muted feelings of anger, despair and disorientation. These are feelings familiar from her writing and films. But while news can report the facts, and films can make those facts come alive, an installation like Astro Noise can make evoke emotions in rare, powerful ways.

Upon entering the first darkened gallery, the viewer sees faces—caught at what Poitras calls “a moment in history at a crossroads”: September 11, 2001. They gaze at the remains of the World Trade Center, filmed by Poitras at Ground Zero in September and October of 2001. The remains are never shown, just the onlookers’ expressions, with their hints of anger, empathy, disbelief. Tourists look on with binoculars and disposable cameras, shaking their heads and wiping away tears. A young girl fumbles with an “I <3 NY” button. A small boy in a Giants jersey stares on blankly.

These faces are the first half of a double-sided projection that comprises a piece titled “O’Say Can You See.” Walk across the gallery, and on the flip side of the screen are videos captured in dark cells in Afghanistan around the same time in the fall of 2001. These clips show the U.S. military interrogations of prisoners Said Boujaadia and Salim Hamdan, who were both later transferred to Guantánamo. Hamdan was Osama bin Laden's driver, and one of the subjects of The Oath.

Like the rest of Astro Noise, “O’Say Can You See” makes compelling use of sound. The national anthem from the October 2001 World Series in Yankee Stadium has been looped and layered, creepily playing in the background over the images of mournful faces.  As you make your way from the first video to the second, you’ll momentarily hear those crashing, operatic sounds layered with the clinking and clanking of the prisoners’ chains and the muffled, barking voices of the U.S. officers. This ghostly juxtaposition haunted the rest of my visit to Astro Noise. It is a sonic reflection of this specific historical moment in 2001—as Poitras writes in the program notes, a moment in which many different paths could have been taken, and “15 years later, we’re now seeing the unintended consequences of the choices we made.” The rest of those consequences are on subtle display as one proceeds through the gallery.

Elsewhere, Poitras uses what the Whitney calls “architectural interventions,” which contribute to the show’s eerie intimacy. “Bed Down Location” encourages the viewer to lie on a soft, raised platform and stare up at projections of the dark night skies of Yemen, Somalia and Pakistan—places where the U.S. military conducts nighttime drone strikes. The piece allows for a simultaneous comfort and unease, which is further communicated through audio: the faint distortion of distant, inaudible pilot voices and humming radio static are both lulling and anxiety-inducing.

Later, near the exhibition’s exit, a digital screen with thermal imagery shows that you have been surveilled from above while laying in this piece. It is a moment in the show that is at once surprising and not surprising—a palpable moment of vulnerability that brings home the reality of our new culture of everyday spying.

“Disposition Matrix” takes visitors down two long, dark hallways lined with thin windows revealing NSA documents and video clips. Former Guantánamo prisoner Murat Kurnaz talks in vivid detail about enduring torture. A childish, cartoon line drawing by an NSA employee depicts an internet surveillance tactic. A 2002 memo from the CIA’s director George Tenet urges increased cooperation with the NSA. There is much to be learned from these windows but their newsworthiness is almost secondary here—what’s more visceral is the way Poitras has shaped space, light and sound, so that visitors are engaged in the act of viewing, turning the act of observing her show into a performance of its own. We are spying on the spies, watching the NSA’s inner workings.

Poitras herself has been subject to an extreme level of government surveillance. Last summer, The Intercept reported that she had been interrogated and detained over 50 times between 2006 and 2012 while traveling. In 2015, she filed a Freedom of Information Act request to find out why. In Astro Noise, a piece titled November 20, 2004, Poitras releases selections from her own FBI files, which she received via that FOIA request. She learned that a secret grand jury had begun investigating her in 2007. These run alongside the video she shot in Iraq in 2004 that landed her on watchlists to begin with, as well as a looping narration by Poitras:

In May 2004, I traveled to Baghdad to make a film about the U.S. occupation of Iraq. I embedded with the U.S. military and lived inside the ‘Green Zone’ in Baghdad. I also filmed and stayed with an Iraqi family. On November 19, U.S. and Iraqi soldiers raided a mosque in the neighborhood where the family lived. Four civilians were killed. The next morning, I woke up to the sound of gunfire on the streets. The fighting lasted all day. One U.S. soldier was killed and others injured. At one point, the family went to the roof to see what was happening. I followed with my camera and filmed for 8 minutes and 16 seconds. These 8 minutes changed my life, but I didn’t know it at the time. After returning to the United States, I was placed on a government watchlist and detained and searched every time I crossed the U.S. border. It took me ten years to find out why.

At a press briefing on February 3, Whitney director Adam Weinberg introduced the show by asking, “What are the existential repercussions of a world where it is impossible to be alone?” That’s an apt point of entry for viewing Astro Noise. And yet, while news reporting is expected to answer questions, artwork often opens up more. One leaves the exhibit asking: what is this world we have created, and do we want to live in it?

Liz Pelly is a writer and editor based in Brooklyn, NY. Her writing on music, art and culture has been published by The Guardian, Dazed, Rolling Stone and elsewhere. She co-edits an ad-free, bi-monthly web-paper, The Media.