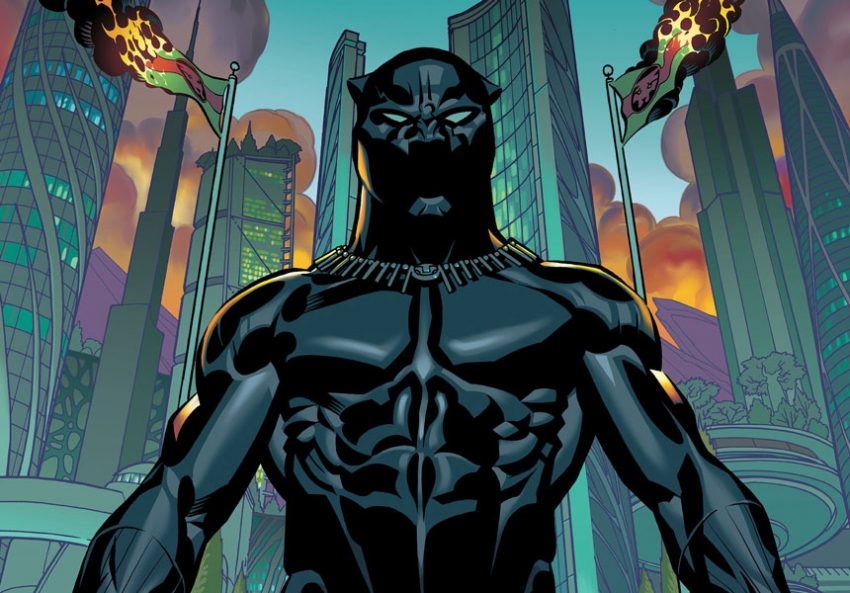 Comic book readers, writers and artists of color have long been excluded from the comic book world. That appears to be changing.

To the young comics nerd of color historically sidelined by an archetypal image of nerd-dom that by-and-large has reflected his or her white counterparts (hello!), Black Panther #1 will come as another sort of coming-of-age story.

The new Black Panther is “black as hell”—a phrase Ta-Nehisi Coates used to describe himself on Twitter a week ahead of the release of Black Panther #1, the highly anticipated first issue in a new 12-part Marvel series penned by Coates.

That’s no small thing in the comics world. Sure, comics companies have begun to show an understanding that their core audience is diverse, and increasingly female and of color. We’ve seen Spiderman, Green Lantern and Nick Fury revamped as black, and we’ve long had stereotyped Blaxploitation-era tropes like Black Lightning and Black Goliath. But now we have a pair of black creators at the helm of the Black Panther: Coates and veteran cover artist and illustrator Brian Stelfreeze. And the comic they’ve created is indeed “black as hell,” from the literal blackness of the Black Panther’s sleek, super tech-assisted suit to each and every character on its pages.

A writer for The Atlantic, Coates is best known for his landmark 2014 essay “The Case for Reparations” and his 2015 book Between the World and Me, a musing on blackness in America that led Toni Morrison to compare him to James Baldwin. While Coates has made comparisons between his journalism and his new superhero series, he also cautions against didacticism in fiction and has promised that the comic will contain “no policy papers on the slave trade, nor any overly earnest, sepiatinged ‘Black History Month’ style of storytelling.” Instead of the broader meditations on society, triumph and plunder that pervade his journalism, he seeks to hone in on a simpler question in Black Panther #1: “Can a good man be a king, and would an advanced society tolerate a monarch?”

In the opening scene, King T’Challa (the titular Black Panther), is literally thrown headlong into a rage-filled mob of his own people, who leer at both him and the reader with jadegreen eyes. T’Challa serves as fulltime god and political leader to an African monarchy called Wakanda, home to the most technologically advanced city of the fictional Marvel Universe. He has just returned home following a devastating invasion of Wakanda in which his sister, Wakanda’s princess, was killed. But something even deeper troubles him—a separation from his people and a war with himself. A mysterious presence is working its way through the minds of Wakanda’s citizens, turning their eyes jade-green and the shame of their recent defeat into rage.

Readers looking for direct connections to the black diaspora may leave disappointed, but Wakanda’s civil struggle does feature some subtle comparisons to today’s Black Lives Matter movement. Notably, the uprising against T’Challa is led largely by passionately invested black women, including two vigilante members of Wakanda’s security force, T’Challa’s own bodyguards. As one of them, Ayo, puts it, “No one man should have that much power.”

The source of the jade-green presence is also a strong, dark-skinned woman. Although her identity remains hidden from T’Challa in issue #1, her name, Zenzi, is revealed to readers. Here one sees the pan-African history and ideals that Coates says he drew upon in creating the Black Panther universe: Zenzi is a nickname of South Africa’s Zenzile Miriam Makeba, aka Mama Africa, a freedom fighter in her own right who was also married to none other than Stokely Carmichael, the former honorary prime minister of the Black Panther Party.

Allusions aside, Coates’ first foray into the world of comics shares an affinity with, as noted author Michelle Alexander puts it, his own “invariably humble, yet subtly defiant” longform, with one important exception: He’s working with much less space. As a journalist and comics author, I, too, feel the pain of stuffing big thoughts into small boxes. Coates makes it look as easy as Twitter, where he expounds on race, governance, cultural capital and contemporary social narratives in a space as succinct as a typical set of word balloons: 140 characters or less. The result is a comic that’s plot-driven and boiled-down, less of the polemic “The Case for Reparations” and more of The Beautiful Struggle, Coates’ familial coming-of-age memoir—all with the dusky look and feel of a Batman comic, thanks to Stelfreeze’s experienced linework.

To comics nerds of color such as myself, typically sidelined by an archetypal image of nerd-dom that by and large has reflected his or her white counterparts, Black Panther #1 will come as another sort of coming-of-age story. The newest manifestation of the nearly half-century-old Marvel character is a bold insertion of those voices historically left out of the conversation.

Coates’ Black Panther #1 has received more than 300,000 pre-orders ahead of its April 6 release. If nothing else, that figure could hint at what many comics consumers have always craved: the inclusion of comics and graphic novels as a serious literary art form on par with any other. It also has the potential to mark a watershed in another kind of inclusion: that of artists, writers and readers of color in the comics canon.

Darryl Holliday is a Chicago-based storyteller, the editorial director of City Bureau, a producer with the Invisible Institute and a founder of Illustrated Press.