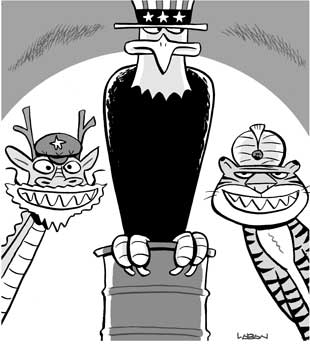 The Axis of Oil

China and India are locked in an increasingly aggressive wrangle with the United States over the world’s most critical economic commodity: oil. More than any other issue, this tussle will shape the economic, environmental and geopolitical future of these three countries, and the world.

Ensuring a steady flow of cheap oil has always been one of the central goals of U.S. foreign and economic policy, and Washington’s preeminent position in the world is based in large measure on its ability to do this. But China and India are increasingly competing with the United States to secure oil exploration rights in Africa, Southeast Asia, Central Asia and Latin America.

India has invested more than $3 billion in global exploration ventures and has said it will continue to spend $1 billion a year on more acquisitions. China, which has already invested about $15 billion in foreign oil fields, is expected to spend 10 times more over the next decade.

The motive, says Zheng Hongfei, an energy researcher at the Beijing Institute of Technology, is that “there is just not enough oil in the world” to cover China’s and India’s growing energy needs.

More than 4.5 million new vehicles are expected to hit Chinese roads this year alone, a far cry from the time when families saved for months to buy a Flying Pigeon bicycle. The country is now the world’s largest oil importer after the United States, guzzling about 6.5 million barrels of oil a day; this figure will double by 2020, says Stephen Roach, chief economist at Morgan Stanley.

With global oil production barely 1 million barrels over the global consumption rate of 81 million barrels a day, the surge in demand from China and India could eventually lead global demand to outstrip supply, causing fuel prices to shoot up beyond their recent highs of around $56 a barrel, says Roach.

The impact of this on the global economy, particularly in developing countries that import most of their fuel, would be severe. The International Energy Agency says that for every $1 increase in oil price, the global economy loses $25 billion.

Anxiety over this is already throwing the nervous oil market into further disequilibrium. In September, Michael Rothman, a senior energy analyst at Merrill Lynch, said rising oil prices were not so much a result of the Iraq war or political instability in Venezuela and Sudan, but of extensive “hoarding” by China.

According to Rothman’s analysis, China and India are roiling oil markets by creating oil reserves, which are designed to provide the minimum cache the country needs to ride out a crisis, along the lines of the United States’ Strategic Petroleum Reserve (SPR).

With both countries flush with foreign exchange reserves that are threatening to infect their economies with inflation, creating an oil stock seems a sensible solution. But critics say Beijing’s and New Delhi’s timing is unfortunate, coming just as the global economy seemed to be recovering and the United States was questioning the value of its own reserve.

China and India, which are both nuclear states, are also taking advantage of the United States’ strained ties with Iran, Vietnam and Myanmar by extending these countries military and political support in exchange for energy supplies. And a Washington preoccupied with Iraq, the war on terror and nuclear crises in Iran and North Korea has been unable to checkmate either country as successfully as it did earlier.

For example, U.S. nervousness over China’s intentions in Latin America had led it to use its leverage with Panama to impede China’s access to the all-important canal connecting the Pacific and Atlantic. But in December, Beijing signed a landmark deal with Venezuela and its neighbor Colombia, under whose terms a pipeline would be constructed linking Venezuelan oil fields to ports along Colombia’s Pacific coastline. This will allow Venezuelan oil to bypass the Panama Canal and create a new and direct route to China.

There are also signs that China is warming to the idea of a Russia–China–India axis, which, in cooperation with Iran, would turn the oil-rich Central Asian region into their domain. This proposal would put in place extensive military agreements and pipeline networks. Originally put forward by Russia’s Asia-centric ex-Prime Minister Yevgeny Primakov, the proposal seems to be gaining ground with all four nations. China and India have already signed multibillion-dollar gas and energy deals with Russia, which is the largest arms supplier to both countries, and with ex-Soviet Central Asian republics such as Kazakhstan.

What worries Western powers most are China’s and India’s growing ties with Iran, a country Washington is trying to isolate. Both Beijing and New Delhi have recently signed 25-year gas and oil deals with Iran that are collectively valued at between $150 and $200 billion, and both countries are also deepening their military cooperation with Tehran. Iran and India conducted their first-ever joint naval exercises last September, and India has agreed to modernize Iran’s aging Russian-built Kilo-class submarines and MiG fighters.

Both China and India have also tried to thwart Western attempts to curtail Iran’s nuclear program, which has largely been built with Russian assistance. In a departure from China’s traditional neutrality on international issues that do not involve its own interests, Chinese Foreign Minister Li Zhaoxing flew to Tehran last November when the United States threatened to haul Iran before the U.N. Security Council and announced that China would oppose any such effort. And in January, the State Department imposed penalties against some of China’s largest weapons manufacturers for their support of Iran’s ballistic missile program.

The potential volatility from such aggressive oil politics could bring China and India into conflict with Western, Japanese and other regional interests, says Robert Karniol, the Asia-Pacific editor of Jane’s Defence Weekly.

“Even if China’s oil consumption doubles by 2020, it will still only be half that of the U.S.,’” says Zheng, the energy researcher at Beijing Institute of Technology.

Yet the sheer size of the Asian juggernauts and the prospect that they might indiscriminately swallow global resources scare economic planners.

State-owned Indian and Chinese oil companies are investing heavily in local energy fields, such as the 200,000-square-mile Ordos Basin that stretches across the provinces of Shaanxi, Shanxi, Gansu, Ningxia and Inner Mongolia in northwestern China, and is reported to have oil reserves of up to 60 billion barrels.

To defray the substantial costs of exploration, both China and India are privatizing state-owned oil companies, and using the billions raised to restructure and modernize their operations. Other public sector oil units are also undergoing massive recapitalization and restructuring, including the retrenchment of thousands of workers.

Significantly, both nations are also opening up their domestic oil industries—previously considered strategic and therefore off limits to foreign and private investors. Companies such as ExxonMobil, which owns a 19 percent stake in China’s giant Sinopec company, are being wooed not just for their capital but also for their refining and marketing capabilities. For example, ExxonMobil is helping Sinopec establish more than 500 gas stations across the country and build at least two refineries in southern China.

Optimists—mostly people from the corporate world such as Warren Buffet—say such common opportunity will lead to greater cooperation rather than competition between the West and China and India. But pessimists—mostly people from the security establishment—fear that China and India, two energy-hungry giants seeking access to limited world resources, will inevitably clash with the West.