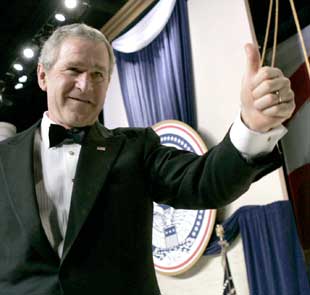 One of the most troubling crises confronting the world today is that the U.S. executive branch—controlling the most fearsome arsenal in history—has largely detached itself from reality and faces no counterforce in Washington capable of bringing it back down to earth.

In that sense, George W. Bush’s second inaugural address on January 20 stood out as a defining moment. Bush wrapped a grim record of presidential abuses—an unprovoked invasion, extraordinary secrecy, tolerance of torture and indefinite imprisonments without trial—in the noble cloak of “freedom” and “liberty,” words he uttered 27 and 15 times respectively, as if words can amend truth.

Bush’s speech also ignored the fact that he and his supporters have consistently harassed and denigrated dissidents at home, often by tarring them as disloyal or crazy. Remember, for instance, the vicious attacks from the right against former Vice President Al Gore in fall 2002 when he questioned the justification for rushing to war with Iraq.

This hostility toward dissent has continued to the present as some conservative pundits, such as the Washington Times’ Tony Blankley, are suggesting that journalist Seymour Hersh be investigated for espionage for writing an article in The New Yorker about the Bush administration’s secret military operations in Iran and elsewhere.

“Federal prosecutors should review the information disclosed by Mr. Hersh to determine whether or not his conduct falls within the proscribed conduct of the [espionage] statute,” Blankley wrote.

Bush’s professed love for democratic principles also appears to be stronger when he’s lecturing other countries abstractly rather than when he’s actually practicing the civics lessons at home. Four days after what he called his inaugural “freedom speech,” there was an ill-timed reminder of Bush’s personal double standards about democracy.

The Washington Post’s Al Kamen updated readers on the career moves of the Republican activists who served as Bush’s street thugs during the Florida recount battle of four years ago. On November, 22, 2000, in what became known as the “Brooks Brothers Riot”—named for the preppie clothing of the rioters—Bush operatives stormed Miami’s polling headquarters, pounded on doors and roughed up Democrats, leading city officials to abandon the counting of more than 10,000 ballots.

Though supposedly a protest by local citizens outraged over how the recount was being conducted, many of the participants were identified in a photo as Republican congressional staffers and Bush campaign workers who had been sent in to disrupt the vote counts. After the riot, the Bush campaign threw a celebratory party that featured crooner Wayne Newton singing “Danke Schoen.” The rioters also got a personal thank-you call from Bush and Dick Cheney.

“Some of those pictured [in the riot photo] have gone on to other things, including stints at the White House,” Kamen wrote. “For example, Matt Schlapp, a former House aide and then a Bush campaign aide, has risen to be White House political director.”

Though Bush’s disruptive tactics in November 2000 delayed or obstructed local recounts, the Florida Supreme Court ordered a statewide recount in early December. But Bush did not sit back and meekly accept the will of the voters. Instead, he sent his lawyers to the U.S. Supreme Court, where he got five Republican allies to block the recount and hand him the presidency.

An unofficial recount, later done by news organizations, found that if all legal votes had been counted in Florida, Al Gore—not George W. Bush—would have become president of the United States.

As in other George Bush campaigns—by both father and son—there was the usual litany of dirty tricks and front-group smear operations, this time including a well-coordinated assault on John Kerry’s Vietnam War heroism.

Other Bush campaign tactics were designed to suppress the Democratic vote, especially in African-American neighborhoods, by adopting aggressive “ballot security” procedures and through the creation of long voting lines.

Defeated candidate Kerry said the tactics suppressed the votes of “thousands” of Americans. “Voting machines were distributed in uneven ways,” Kerry said on January 18. “In Democratic districts, it took people four, five, 11 hours to vote, while Republicans [went] through in 10 minutes.”

Despite this old and new history of Bush’s highhanded approach toward democracy, media commentators largely accepted Bush’s inaugural declarations about “freedom” and “liberty” at face value.

Though some columnists have questioned the feasibility of Bush’s “ultimate goal of ending tyranny in our world,” almost no one in Washington has questioned Bush’s sincerity. The idea that Bush might be a hypocrite—hiding an autocratic reality under the cover of democratic rhetoric—is presumably beyond the bounds of the capital’s conventional wisdom.

The Washington Post’s David S. Broder, known as the “dean” of the national press corps, wrote a glowing tribute to Bush’s “eloquent” speech. The speech, Broder wrote, was proof that Bush was holding steadfast to his goal of achieving “the worldwide realization of the ideals of freedom and democracy.”

Left out of these formulations are always the core questions about what “freedom,” “liberty” and “democracy” mean to Bush and his political allies overseas. Indeed, the most troubling subtext tucked inside Bush’s paean to “freedom” may have been that the ultimate freedom for Americans today is their freedom to follow him.

While justifying the invasion of Iraq in the name of “freedom”—after earlier claims about weapons of mass destruction proved bogus—Bush has based many of his military operations in Persian Gulf sheikhdoms that offer few or no democratic rights to their citizens. Some allies in Bush’s “war on terror,” such as Uzbekistan, repress their own people as ruthlessly as Saddam Hussein did in Iraq.

For good reason, this perceived Bush hypocrisy has undercut U.S. strategies for winning “hearts and minds” in the Islamic world. Bush’s mistaken interpretation of al Qaeda’s motives for waging war—as a hatred for American freedom and a desire to destroy U.S. democracy—further hampers a coherent strategy for prevailing in the Middle East.

As former CIA analyst Michael Scheuer points out in his 2004 book, Imperial Hubris, Islamic militants view their attacks against U.S. targets, including the terror strikes on the World Trade Center, as a “defensive jihad” to protect what they view as longstanding U.S. assaults on their land and on their people.

“Their goal is not to wipe out our secular democracy, but to deter us by military means from attacking the things they love,” including their religion and their territory, Scheuer writes. “Bin Laden et al are not eternal warriors; there is no evidence they are fighting for fighting’s sake.”

Rather, according to Scheuer, the resistance to the United States is part of what many Muslims view as a principled struggle against a foreign power that has sought to reimpose a form of colonialism on the Arab world. In that sense, al Qaeda’s attacks are reprehensible but rational, Scheuer argues.

According to Scheuer, U.S. policies over the past half century have “moved America from being the much-admired champion of liberty and self-government to the hated and feared advocate of a new imperial order, one that has much the same characteristics as nineteenth-century European imperialism: military garrisons; economic penetration and control; support for leaders, no matter how brutal and undemocratic, as long as they obey the imperial power; and the exploitation and depletion of natural resources.”

Scheuer, who wrote Imperial Hubris under the byline “Anonymous” because he was in the CIA at the time, also views Bush’s invasion of Iraq as counterproductive because it confirmed many Islamic suspicions about the United States and its motives.

Still, even with the Iraq policy spinning out of control and Islamic hatred of the United States soaring, Bush and much of the Washington commentariat seem content to continue their long bath in the warm rhetoric of freedom and liberty. They do so even as current and, if Hersh is right, future U.S. wars guarantee more devastation for U.S. soldiers and the people of the Middle East.

The other option would be to take a hard look at longstanding U.S. policies in that region, at legitimate Arab grievances against Washington and at the dangers caused by continued dependence on Middle East oil. That would undoubtedly cause much political pain and confront the nation with some wrenching choices. It is also virtually certain not to happen, at least in the foreseeable future.

Perhaps the one freedom most fundamental to Bush and his many admiring columnists is the freedom from reality.