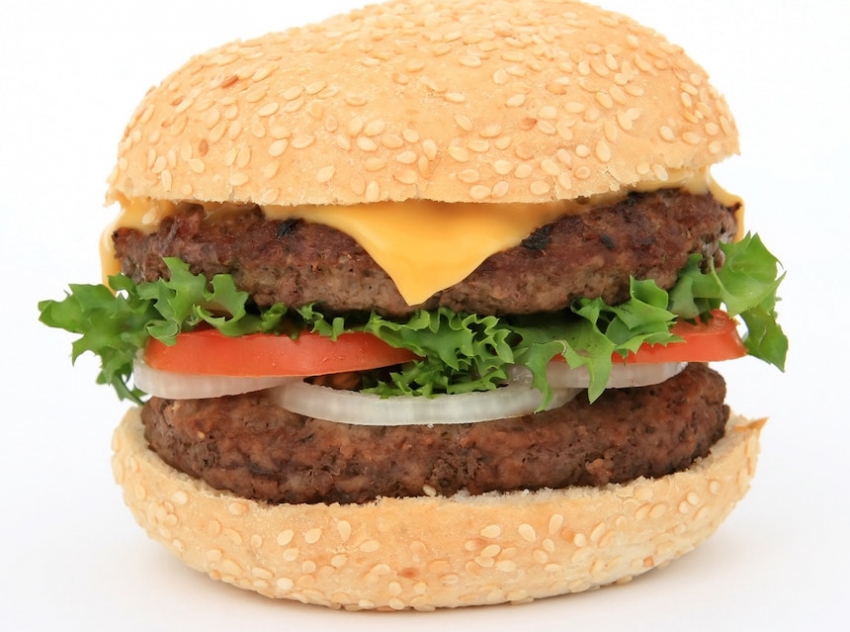 Slow Food for a Dying Planet

Take I-40 east from Albuquerque, N.M., for about three hours and hit the brakes just before the Texas border. Don’t worry if you don’t have a road map, the smell of cow manure will tell you where you are, and if you have your windows down to enjoy the scent of the high plains, the flies will soon be helping you drive. Welcome to Clovis, N.M., home to Cannon Air Force Base, the Santa Fe Burlington Northern Railroad, 65 dairy farms, five feedlots, what will be North America’s largest cheese plant, and approximately 200,000 head of dairy and beef cows. If you want to see America’s industrial food system in action, you’re in the right place.

The train tracks give the feedlot operators and dairymen—many of them forced out of California by local health officials who deemed them polluters—a direct pipeline to the Iowa/Nebraska Corn Belt. The grain elevators located along the tracks unload 110 train carloads at a time, or a little over 20 million pounds of corn. The cows, held in open pens and milked three times a day, never graze on open pasture. In return for free room and board, each cow produces 75 pounds of milk a day and four tons of manure a year. For now, the milk is shipped to processing plants all over the Southwest, but when the cheese plant is operational in late 2005, the milk will travel only a few miles. There it will be turned into Velveeta-style cheese at the rate of one truckload per hour. When the 200,000 black and white Holstein cows are past their prime—about two to three years—they are sent off to a large slaughterhouse in Texas where they are ground up into beef patties for guess who: McDonald’s, America’s largest buyer of spent dairy cows.

Suspend disbelief for one moment and admire this system for what it is: a modern miracle of agriculture and food science, the triumph of capital over the limitations of man and nature, and a multistate food factory that has optimized the relationship between inputs and outputs for the near-perfect commodification of mankind’s sustenance. But look again and you’ll see the reality that Christopher Cook lays out in Diet for a Dead Planet: a food system that, like cows in a feedlot, is down on its knees in the muck, unsustainable, unhealthy and dangerously close to extinction. With a well-deserved bow to Frances Moore Lappe’s classic Diet for a Small Planet, Cook goes after the oligarchical forces of multinational agribusiness with guns blazing. His take-no-prisoners style targets the evil-doers, junk-food purveyors, and despots of deception and greed whose system of mass food production and distribution will leave the earth in ruins and us humans simultaneously obese and starving.

Cook paints a grim picture. From the skull-and-crossbones on the book’s cover to its penultimate chapter, he unrelentingly disembowels Wal-Mart, the Bush administration’s Department of Agriculture, Archer Daniels Midland, and, of course, McDonald’s. He reminds us that Americans have purchased their cheap food supply (we spend less on food as a percentage of our household income than any nation in the world) by depleting our topsoil and polluting our water, using growth hormones in livestock and pesticides on crops, maiming workers (many of them from Mexico and Central America) in our meatpacking plants, and using more energy resources than any other country on the planet.

What does Cook want us to do about it, short of hurling Molotov cocktails at the Golden Arches (a fantasy I’ll confess to having on more than one occasion)? First, he recommends that we “avoid as much [junk food] as possible and seek out healthy unadulterated alternatives.’’ In other words, buy food with the planet in mind, and eat as if it were a moral act. But he acknowledges that our individual choices are not enough and encourages us to promote local alternatives like farmers’ markets, Community Supported Agriculture farms and local food policy councils. Beyond that, he urges the promotion of “aggressive [federal] policies addressing a system of food production and consumption that is profoundly unhealthy and unsustainable.” This means taking on the defenders of power and privilege in Congress when they draft the next Farm Bill—the current one subsidizes unhealthy food and industrial agriculture.

In contrast to Cook’s gloom–and–doom prognostications, the release of the paperback version of Carlo Petrini’s Slow Food: A Case for Taste celebrates the joyful indulgence of good, locally produced food and wine. Petrini—an Italian whose charming prose ripples with gustatory rapture and thrasonical outbursts—pleads with us to slow down, taste the summer mountain grasses in the Asiago Stravecchio (nothing Velveeta-like, here), sip a Vino Nobile di Montepulciano on the terrace of a sunny Tuscan villa. Not that he is any more sanguine about the industrialized, globalized food system than Cook. Indeed, his outrage at McDonald’s proposal to sell Big Macs at the sacred Spanish Steps of Rome galvanized the Slow Food Movement, which now has 65,000 members in 45 countries (www.slowfoodusa.org).

The Slow Foodistas have bolstered the case against industrial food by addressing the loss of biodiversity across the planet. Petrini alarmingly notes that since the beginning of the twentieth century we have lost 75 percent of our agricultural products’ genetic diversity and half of our livestock breeds. Not only does this loss make us species-poor, it is, he writes, a major contributor to the “standardization of all [food] products and the flattening out of all flavors.” That is why the land, the farmer and the location of food production are at the center of the Slow Food mission. As their U.S. home page states, they are an organization “dedicated to promoting stewardship of the land and ecologically sound food production … regional, seasonal culinary traditions … and living a slower and more harmonious rhythm of life.”

Now I can fully support most of this, and I’m even capable of enjoying a good Asiago (when I can afford it), but living a slower life doesn’t always suit my chemistry. A couple of weeks ago, I attended a Slow Food event in Santa Fe, where if anything, people suffer from flavor overload. The event featured a discussion about squash—its variety, aesthetics, taste and cultivation. Good, well-intentioned folk spent two hours waxing enthusiastic over the variety of cucurbita arrayed before them, but no one mentioned that we live in New Mexico, one of the poorest states of the country, where nearly 15 percent of the population is hungry or food insecure. It seems a trifle self-indulgent to enjoy such esoteric pleasure in the midst of so much want. And how can love of squash topple the dairy–industrial- complex, which at that very moment was metastasizing within the state’s borders?

To their credit, Slow Food people are asking similar questions. In the book’s excellent introduction, editor Albert Sonnenfeld challenges the movement to address the “food gap” between rich and poor, the “perils of elitism,” and the group’s propensity to use Latin words like convivia and Presidia in describing their organization. (Using a dead language is one sure-fire way to muzzle your message.) Clearly, Slow Food is as intent on cultivating their members’ social consciences as much as their palates. There is no contradiction between these important issues and Petrini’s shameless advocacy of pleasure. After all, no one said the revolution couldn’t be delicious.