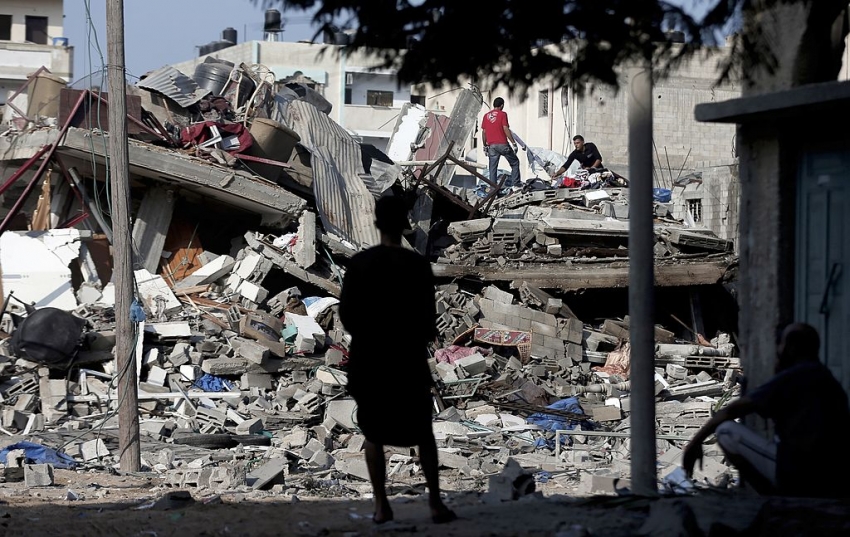 A Palestinian looks on at a home destroyed by an Israeli airstrike in Gaza City. (Thomas Coex / Getty Images).

The Myth of the Surgical Strike

Targeted bombings by the U.S., Saudi Arabia and others have proven an ineffective—and destructive—weapon in the War on Terror.

What happens when the aerial bombardment takes place against civilian areas where there is no sign of combatants?

The global war on terror—or whatever it is called nowadays—is not going well. From Afghanistan to Libya, the adversaries of the West seem undaunted by Western bombardment. The Taliban advances towards Lashkar Gar in Helmand Province (Afghanistan), while groups such as the Shura Council of Benghazi Revolutionaries and even ISIS hold their ground in central and eastern Libya.

The advantage of the West and its allies (Saudi Arabia and Israel) is its dominance of the skies. None of the groups—neither the Taliban nor ISIS—has an air force or serious ground-to-air capacity. They are at the mercy of the high-altitude bombers—including drones—that can fly over their terrain and hit them at will. But this aerial advantage has a limited ability. It can destroy identifiable targets—what its people on the ground or its eyes in the sky can see. This is possible. What is less possible is to obliterate—without major civilian casualties—the guerrilla fighters on the ground. They do not stand in formation, waiting for annihilation from above. These fighters move in small groups, keep close to natural cover and flitter in and out of civilian areas. To take them from the air is difficult.

When the bombers begin to circle above them, the guerrilla armies of the Taliban and ISIS vanish. This was apparent in 2001, when the Taliban, under heavy U.S. bombardment, took off their turbans and went home or crossed into Pakistan. They waited till the opportunity arose to raise up their guns in places where they knew they enjoyed sufficient support. When the bombing began again, they evaporated. One Afghan security official told me, “the Taliban are like Jinns,” the ghostly creatures of Islamic mythology. “They eat bones,” he said, quoting the Quran. It was their spectral aspect that interested him. “We know where the Taliban hide,” he said, “but we can’t hit them. To hit them hard in some places means we’d have to obliterate entire civilian populations.”

Civilian casualties from these aerial attacks come in large numbers, but are reported with casualness. In the key battle in northern Syria for the town of Manbij, the frontline drifted to a set of houses in the village of Tokkar. On July 19, Western aerial bombing against these huts killed over 100 people, with 73 bodies clearly identified as civilians (the rest were too charred to be identified). U.S.-backed troops—the Syrian Democratic Forces—made significant gains toward Manbij, and would likely have taken the key town without heavy U.S. aerial bombardment. What this bombardment has done is to sour the sensibility of the population against their liberation from ISIS control. Such key massacres do little to raise the confidence of the people toward those who arrive under air cover that has inflicted such a terrible toll against ordinary people.

Futility of aerial bombardment is most clearly apparent in Yemen, where the Saudi government has been hitting the country with great ferocity since March 2015. A Panel of Experts assembled by the U.N. Secretary-General reports that in the first six months of this year, the Saudi coalition has struck civilian targets, with one case of specially egregious violation of international humanitarian law. In the case of a village in the southern Lahij province, on May 25, “It is almost certain that the civilian house was the deliberate target of the high-explosive aircraft bombs.” Other incidents remain under investigation. The Panel blamed the Houthi rebels for using civilians as human shields. What they suggest is that the Houthis should avoid the cover of civilian areas, stand in an open field and be annihilated by superior Saudi airpower. It is certainly true that the standards of international humanitarian law insist that all combatants—despite the asymmetrical nature of the conflict—should not endanger civilians. However, this is a standard guerrilla armies always resist.

What happens when the aerial bombardment takes place against civilian areas where there is no sign of combatants? On August 7, Saudi aircraft bombed the marketplace in Odhar village in the district of Nihm. There were no combatants in sight according to people on the ground. Nine civilians died. Forty people died when Saudi aircraft struck a nearby market in February. No strategic gain came from these attacks, neither for Saudi Arabia nor for its proxies. The Saudis and their allies lose whatever shred of legitimacy they might have had. An attempt to move a file against Saudi Arabia for humanitarian violations in the institutions of the U.N. has been stifled.

Much the same reaction meets any attempt to bring Israel and the United States to the account for its violations of the laws of war. An old Chinese cartoon from the time of the Boxer Rebellion has a picture of an Englishman beating a Chinese man. The caption below that reads “Civilization.” A picture beside that of a Chinese man beating an Englishman carries the caption “Barbarism.” The double standard remains.

Summer is the time when the Taliban abandons its shelter and comes out to inflict pain on the Afghan National Army and its NATO allies. All talk of the gains of the Surge are now gone. In Helmand Province, where the Surge had taken place, the Taliban is now close to seizing urban centers such as Lashgar Gar. Once it does so, to root it out will require far more than aerial bombardment. This is what the West and its allies find in Mosul (Iraq), Raqqa (Syria) and Sirte (Libya) – and this is what the Syrian government finds in Aleppo and what the armies of General Khalifa Haftar find in Benghazi (Libya). To fight inside congested urban areas means armies on the ground are required and that they will have to take significant casualties as they move from street to street.

To prevent loss of lives to their armies, the forces of the West and the Russians, as well as their allies, rely upon aerial bombings and urban sieges. It is a tactic also used by its adversaries. They might not have aircraft, but they use suicide bombings. These are as effective in breaking morale as the bombing from the sky. When the forces of Syrian rebels (including the al-Qaeda backed rebels) broke through the ring around Aleppo, they formed their own siege. Their tactics are no better than those of their adversaries. They fight in the bowels of cities, breaking the heart of society.

A few years ago, a fighter in an al-Qaeda backed group in Syria told me that the only adversary he respected were the fighters from Hezbollah. They fought so close, he said, that “we could hear the chattering of their teeth.” Much the same is reported of how ISIS sees the Kurdish fighters. These are people who are willing to risk their lives to win back territory. They do not hide beneath bombers.

Perhaps this is why the West has sent back some of its Special Forces into Libya and Syria, despite denials about their presence in these battlefields. Pictures emerge of British Special Forces at al-Tanf inside Syria near the Iraqi and Jordanian borders. These soldiers provided training for the New Syrian Army, one more of the “moderate” forces set up by the West. Their base was soon overrun by Syrian troops, after the British soldiers moved out. French soldiers died in a helicopter crash in Libya, suggesting their presence along the Mediterranean coast. These are small detachments of fighters. They are there to provide assistance to their allies. Gains even here are slim. Territory is taken, but hearts and minds are not won. These are lost immediately when another bomb falls on a civilian marketplace or home and kills another dozen children.

The monstrous anger of the guns continues. Space for a peace process desiccates. The Saudi-Yemen discussions fell apart on Sunday, while the Syrian peace process lifts few hopes. There is no real conversation toward peace in Afghanistan or Libya. Hope in aerial bombardment as the prophylactic for peace is absurd. It has given us instability and chaos. Other roads have to be opened. Other paths seeded.

Vijay Prashad is professor of international studies at Trinity College in Hartford, Connecticut. He is the author of 18 books, including Arab Spring, Libyan Winter (AK Press, 2012), The Poorer Nations: A Possible History of the Global South (Verso, 2013) and the forthcoming The Death of a Nation and the Future of the Arab Revolution (University of California Press, 2016). His columns appear at AlterNet every Wednesday.

5 Years of U.S.-Saudi War Have Left Yemen Highly Vulnerable to a Coronavirus Outbreak