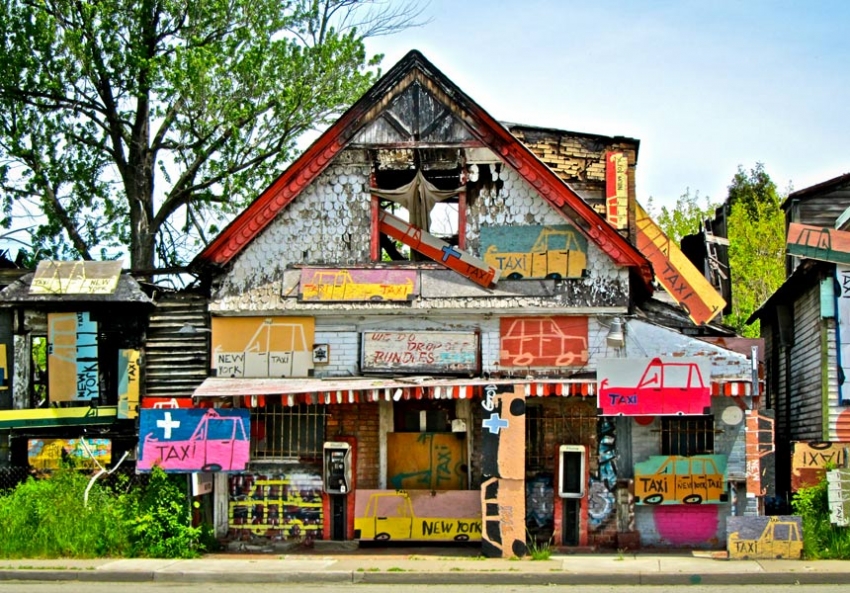 The Taxi House, one of the art houses in the Heidelberg Project, was set on fire in 2014. (Flickr / ellenm1)

From Collection to Community: The Transformation of Detroit’s Iconic, 30-Year Public Art Project

The Heidelberg Project is being partly dismantled, but hopes to live on as an artistic community.

The project has been an integral part of the evolution of the city’s street art, as well as an act of protest drawing attention to a forgotten neighborhood.

By the 1980s, Tyree Guyton’s childhood stomping grounds on Heidelberg Street on Detroit’s east side were nearly unrecognizable from the middle-class neighborhood of his youth—a victim of the city’s rapid population drop and continued loss of manufacturing jobs.

Inspired by a vision, in 1986 the high school dropout started cleaning up the vacant lots with the help of his grandfather. They began reconfiguring the empty houses into colorful art installations. The project soon took up multiple blocks. Lots that were once vacant and overgrown with weeds now housed an ever-changing outdoor art gallery that included a “Noah’s Ark” (a boat piled high with discarded stuffed animals), car hoods painted with grinning faces, and whimsical clock faces nailed into trees and telephone poles. The Heidelberg Project would become one of Detroit’s biggest tourist destinations, a phantasmagoria of paintings and found-object sculptures that drew admirers from the suburbs and around the world.

But as the project celebrated its 30th anniversary this summer, the Heidelberg Project announced it would dismantle the installations over the next two years.

Heidelberg Project executive director Jenenne Whitfield says this isn’t the end of Guyton’s involvement in the neighborhood—just the beginning of a new phase. Whitfield, who is also Guyton’s wife, says the goal is to transition to a new artistic community—though getting the community on board has always been a challenge for the project.

“We’re removing the burden from one man’s back and now making it more of a collective effort,” she says. “We’re not abandoning anything. But we’re getting older, and we’re trying to train our junior people to take over.” Guyton, who turned 61 this August, is calling the new phase “Heidelberg 3.0.” (In a typically Guyton quirk, there was no “Heidelberg 2.0.”)

Whitfield says the installations in the neighborhood’s vacant lots will be sold off to museums and private collections, but the Heidelberg Project’s permanent structures are expected to remain. The plan is to make the “Dotty Wotty House” (Guyton’s childhood home, covered in colorful polka dots) into a museum dedicated to preserving the project’s history. Another structure, the nearby “Number House” (covered in hand-painted numbers), could become a gift shop.

Beyond that, Whitfield says Heidelberg 3.0 depends on drawing like-minded individuals to the community. She points to one neighbor who inherited three houses her family owned. After talking to Guyton, she decided not to sell and instead will use them to create artists’ studios.

Whitfield says there’s good reason for more people to get behind the project: According to a 2011 study by Williams College, the combined impact of the Heidelberg Project’s expenditures, along with those of its some 200,000 annual visitors, amounts to $3.4 million annually. “We proved that it can work, and we also proved that it can help build a new economy,” Whitfield says. “We want to take that to the next level.”

The project has been an integral part of the evolution of the city’s street art, as well as an act of protest drawing attention to a forgotten neighborhood. “We provided a free museum for the world,” Whitfield says. “Who does that?”

But not everyone is a fan. The project’s neighbors say it’s an eyesore that draws unwanted attention to the community.

The art-or-eyesore debate has raged throughout the project’s 30-year existence. Twice during the 1990s, the city razed some of the structures, citing blight. Since 2013, at least 12 fires have leveled six buildings, prompting the Heidelberg Project to install security cameras.

As the Heidelberg Project has changed, so has Detroit. Bolstered by billionaire Dan Gilbert’s investments in the downtown core in recent years, the story of Detroit has shifted from Rust Belt ruin to comeback city—a feel-good narrative upon which gentrifiers capitalize.

In a striking illustration of the changing times, Shinola, a luxury watch maker, will soon install one of its street clocks (both timekeepers and advertisements)—a more common sight in Detroit’s affluent neighborhoods—near the Heidelberg Project in collaboration with Guyton (who will “funk it up,” according to Whitfield).

And Guyton, once labeled a vandal, is now featured among the Detroit Institute of Art’s permanent collection. Last year, he was chosen to represent the United States at China’s Shenzhen Biennale of Architecture and Urbanism, constructing, in collaboration with Chinese students, a Heidelbergesque installation called “Power to the People.” This year, he exhibited a solo show called Face-ology at Detroit’s trendy Inner State Gallery, where some of his paintings fetched over $5,000.

What exactly all this means for the future of the Heidelberg Project is unclear. Shortly after the announcement of Heidelberg 3.0, Guyton could be seen pacing the grounds, intermittently applying coats of sky-blue paint to a panel while chatting with visitors. When asked about his decision to dismantle it, his response was coy.

“Time just came,” he says. “It’s like your body. When you have something wrong with your body, it’ll tell you.”