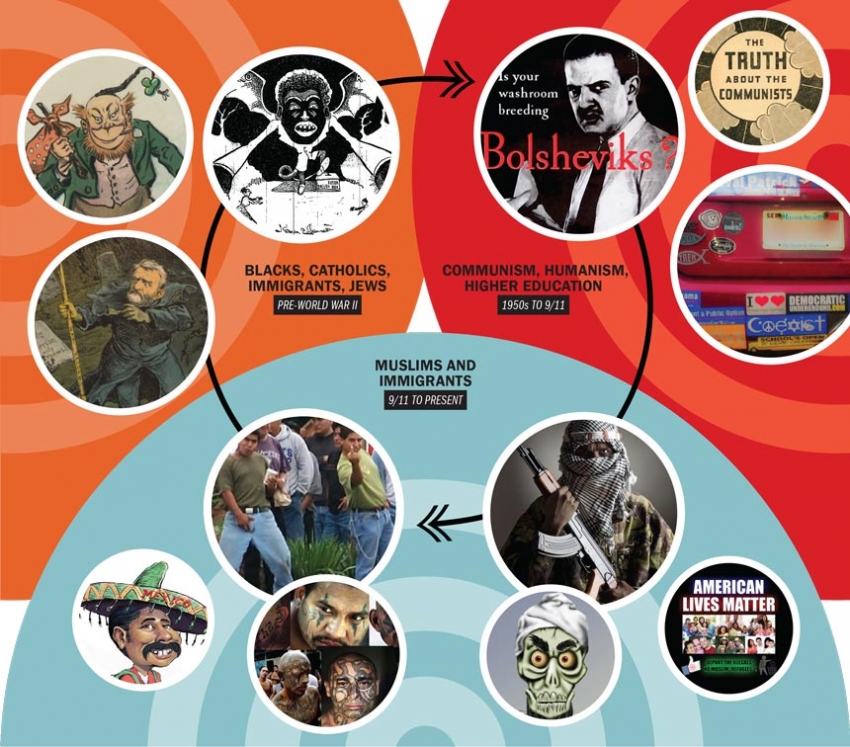 How the victims of conservative scaremongering have changed over time.

A Brief History of the Right’s Racist Hate: From 1885 to Trump

The road to Trumpism is paved with scapegoats.

Since the late 1800s, the wolf at the door has taken many different forms: Jews, African Americans, Catholics, Communists, humanists, institutions of higher education, sexual minorities and immigrants.

Donald Trump is no principled conservative. His shifting attitudes on abortion and same-sex marriage have a whiff of opportunism. He called for double the $275 billion in infrastructure spending that Hillary Clinton proposed. And he’s a free-trade skeptic.

So how has he hijacked the GOP? Trump’s success at tapping into economic anxieties is certainly a factor in his success among white working-class conservatives (though his supporters are more affluent than is usually acknowledged). But it wasn’t just economic populism that allowed Trump to be the last candidate standing. He won because he told a story that conservatives never tire of hearing, and he told it better than anyone else.

The premise is this: Our nation is under dire threat. Threats to our freedom loom beyond and lurk within the national borders. Christianity and the foundations of American civilization are at stake.

Since the late 1800s, the wolf at the door has taken many different forms: Jews, African Americans, Catholics, Communists, humanists, institutions of higher education, sexual minorities and immigrants. The prominence of any particular villain depends on the storyteller, and it varies over time. But the basic claims remain strikingly similar.

The threat that the villain supposedly poses can be a traditional military one—bombs and armies—or it can take ideological forms: dangerous ideas or cultural shifts. It can come from the outside or the inside. The story is most powerful when all of these lines are blurred, so that the threat has both military and ideological elements, and the battlefield is both inside and outside the nation. The Soviet Union of the Cold War era is a classic example.

Trump has shrewdly cashed in on this story. Yet the story has also become the source of the GOP’s great dilemma. In Trump’s telling, the raw racism and bigotry that created the story’s earliest villains have resurfaced. Though they served him well in the primary season, they don’t bode well for Trump’s general election fate, or for a party that desperately needs to broaden its electoral base beyond a shrinking pool of elderly white voters.

A brief history of crying wolf

The half century after the Civil War produced not only a vicious racist backlash against African Americans, but a period of strong nativist fervor, sparked by rapidly rising immigration.

About 20 million immigrants arrived in the U.S. from 1880 to 1920, mostly from Eastern, Central and Southern Europe. In Our Country: Its Possible Future and Its Present Crisis (1885), Congregationalist minister Josiah Strong offered one of the most influential responses to this wave, predicting that the world would soon “enter upon a new stage of its history—the final competition of races, for which the Anglo-Saxon is being schooled.” Strong proposed a massive Protestant missionary campaign to Christianize the nation’s cities and, ultimately, the world. The book reportedly sold 175,000 copies in the early years after its publication—a bestseller for the time.

Through the early decades of the 20th century, influential social reformers across the political spectrum—including many white progressives—followed Strong in defending the nation against the threats from immigrants, racial and religious minorities, and the generally “unfit,” a broad category that encompassed the poor and the physically and mentally disadvantaged. The pervasive racism of the World War I era was expressed most powerfully in the Ku Klux Klan, which flourished in the first half of the 1920s and directed its violence not only against African Americans and immigrants but against religious minorities—Jews and Catholics in particular.

Amateur anthropologist Madison Grant summed up the energies that fed into the Klan’s rise in his The Passing of the Great Race (1916), a seminal text of the emerging eugenics movement. “Altruistic ideals,” Grant wrote, “are sweeping the nation toward a racial abyss.” He meant that philanthropic efforts aimed at helping “unfit” races threatened the dominance of the “superior” race of white Nordic people. (Certain white ethnic groups, including Irish and Italians, were often included in the “unfit” races.) The book was widely read and endorsed by American politicians—Theodore Roosevelt applauded its “fine fearlessness”—and it is still widely read, circulated and celebrated within white nationalist circles.

World War II marked a transformative moment in the story of American conservatism, as communism moved to the foreground as the most prominent civilizational threat.

In 1951, William F. Buckley provided the movement with its modern foundational text in God and Man at Yale. Freshly graduated, young Buckley looked back on his undergraduate days with consternation. “I had always been taught, and experience had fortified the teachings, that an active faith in God and a rigid adherence to Christian principles are the most powerful influences toward the good life,” he wrote in the foreword. But at Yale, he found that he was “one of a small group of students who fought … against those who seek to subvert religion and individualism.” A devout Catholic, Buckley shifted the battle away from explicit interfaith antagonisms. The new enemies would be creeping communism, godlessness, and culturally critical institutions, like Yale, that betrayed the nation by promoting “atheistic socialism.”

Wisconsin Sen. Joe McCarthy planted that flag dramatically in the public square in the early 1950s, and though his wild accusations eventually backfired, anti-communism remained a vital source of energy and passion for the postwar conservative movement. In 1964, for example, a Missouri-based Baptist preacher, John Stormer, regurgitated McCarthy’s themes in None Dare Call It Treason. It reportedly sold 7 million copies; a new edition was published in 1990. “A cold analysis of the world situation and of the degree of control exercised by the collectivists can only produce the realization that the odds against our survival are great,” Stormer wrote.

Even with anti-communism ascendant, explicit racism remained a distinct element within mainstream conservatism through at least the mid-1960s. Buckley was an aggressive critic of the civil rights movement, for example, explaining in 1957 that “claims of civilization supersede those of universal suffrage.” He was addressing the question of whether the white race is “entitled to take such measures as are necessary to prevail, politically and culturally, in areas” where it is a numerical minority. He thought it was, since “for the time being, it is the advanced race.”

Through the late 1970s and 1980s, as the Christian Right matured as an organized political force and became the GOP’s base, conservative polemics focused less on explicitly racist appeals or communist subversion and more on “secular humanism.” These jeremiads had a familiar conspiratorial edge, but they broadened the critique to position communism as one variety of humanism, which they defined as a philosophy that privileged human abilities and reason over faith in, and total submission to, God’s agency.

“Humanism means that … man is the measure of all things,” wrote Francis Schaeffer, an influential Christian apologist. Schaeffer thought there could be no compromise between humanism and Christianity, and evangelicals responded to this message with a burst of institution building, focused especially on elementary and secondary schools. Subsequent scholarship has shown that their creation of educational enclaves in the 1970s was, in large part, driven by racial fears and animosities about blacks. But the explicit justification was the defense of Christianity and civilization against the onslaught of humanism.

In the late 1980s and 1990s, a variation on this critique found an audience far beyond evangelical circles through a flood of influential books and articles decrying the corruption of American higher education, brought on by conservatives’ despair over the increasing presence of women and minorities on campus and the curricular reforms, such as the creation of race and gender studies departments, that reflected the new diversity of the institutions. In 1987, Allan Bloom, a secular Jew, gave this critique its most polished expression in The Closing of the American Mind—in which he explained “how higher education has failed democracy and impoverished the souls of today’s students.” It remained on the New York Times bestseller list for several months.

There are still distinct echoes of these eras within the conservative movement, but 9/11 initiated a sharp transition by refocusing conservative fears on perceived foreign threats. The demonized immigrants of a century ago, largely of European origin, have been replaced with Latino immigrants, especially Mexicans; the religious bigotry once aimed at Jews and Catholics has been trained on Muslims. In that sense, the story has come full circle.

Both groups, Mexicans and Muslims, can be portrayed as powerful villains, because they pose perceived threats that exist within and beyond the nation’s borders: “They’re taking our jobs,” in the case of Mexicans; and “they’re plotting war on us,” in the case of Muslims. And the latter narrative offers not only a military dimension—the “war on terror”—but also an ideological one. Since 2010, at least seven states, mostly in the South and Midwest, have passed laws to address the non-existent threat that Sharia law poses to the American legal system. The Muslim threat—like the former Soviet Union—is perceived as all-consuming and everywhere at once.

The racial and religious hostility of Donald Trump’s campaign is jarring in part because, before 9/11, the conservative end-of-civilization story focused on threats that had little to do, explicitly, with race or religion. And while racial and religious bigotry had been simmering within the conservative movement since the World Trade Center attacks, they’d been confined primarily to the movement’s pundits and publications—as when Ann Coulter wrote last year, in Adios America, “The only thing that stands between America and oblivion is a total immigration moratorium. … No matter how clearly laws are written, government bureaucrats connive to confer citizenship on people that a majority of Americans would not let in as tourists, much less as our fellow citizens.”

With the possible exception of Ted Cruz, no mainstream GOP politician would have said anything nearly as incendiary. But Trump, with his demagogic instincts and total lack of party loyalty, was free to join Coulter in taking the end-of-civilization story back to its roots in racial and religious animus. It is an open question where the story will take him now—and how his party, and the conservative movement with it, will navigate his aftermath.