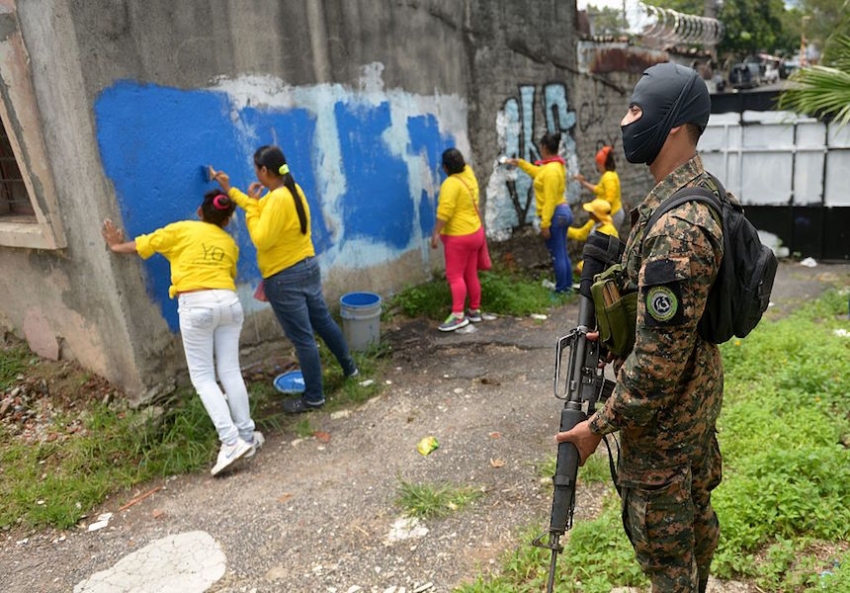 A soldier stands guard as parolees paint over gang-affiliated graffiti in El Salvador. A recent report questions whether U.S. funding to stop gang-related crime in the region has been effective. (Marvin Recinos/AFP/Getty Images)

Militarized law enforcement may have done more damage to human rights than it has to crime rates.

Beeton explained that the CEPR hopes the report will force legislators to pause when thinking about appropriating money to Central America to fight drug trafficking and violence under initiatives like CARSI.

A new paper released last week by the Center for Economic and Policy Research (CEPR) disputes data from a 2014 report on U.S.-funded anti-crime programs in Central America, suggesting these programs may not have been as effective as previously thought.

According to the Congressional Research Service (CRS), between 2008 and 2015, the U.S. has appropriated at least $1.2 billion to Central America through these two initiatives to provide equipment, training and technical assistance to support immediate law enforcement operations in the region, consequently leading to a more militarized violence prevention method that has been widely criticized.

A 2014 report conducted by the Vanderbilt University-based Latin American Public Opinion Project (LAPOP) with support from the U.S. Agency for International Development (USAID) found that CARSI seemed to be reducing crime. This was the only publicly available evaluation of CARSI programs.

USAID has used these findings to assert that the crime and violence prevention programs have helped “residents feel safer, perceive less crime and murders, and express greater trust in police.”

But CEPR’s paper calls into question one of LAPOP’s findings. Specifically, CEPR argues that contrary to LAPOP’s claims, the data doesn’t actually show a decrease in reported robberies in those areas receiving CARSI funding—that there’s no evidence to support that the money the U.S. is sending towards a militarized response to Latin American crime has been effective on that front.

According to CEPR’s press release, they found “problems with the methodology used” by LAPOP. “The study cannot support the conclusion that the areas subject to treatment in the CARSI programs showed better results than those areas that were not,” CEPR wrote.

The problems CEPR found have to do with how LAPOP selected the control regions—those not receiving CARSI programs—and the regions receiving treatment, and how they interpreted the preexisting differences between the selected regions.

Mitchell Seligson, Founder and Senior Advisor of the LAPOP and Centennial Professor of Political Science at Vanderbilt University, says, “[CEPR’s] critique as I understand it is that the major problem with our study is the alleged non-random nature of the selection of the treatment versus control communities.”

He adds, “They have misinterpreted our report since the treatment and control communities in almost every instance were indeed randomly selected.”

Based on comparing treated and control areas, the 2014 data found that in treated areas, 19 percent fewer surveyed residents reported cases of robberies than would be expected without USAID intervention. The greatest decrease in reported robberies was found in Honduras, with 35 percent fewer cases than expected.

But, according to the CEPR’s report, the preexisting differences between control and treated areas were larger than LAPOP’s report accounted for. When country, municipality and community effects and other socioeconomic indicators were considered, they say, the process worked differently.

When these effects were applied in the pretreatment phase, the CEPR authors found that even after treatment, those in treated areas were more likely to report being aware of robberies than people in control areas, and that any observed decline may have been related to non-CARSI factors. This suggests, the CEPR concluded, that one could not “safely conclude that the intervention helped.”

Seligson says, “We reported 16 separate findings in our study, but their analysis focuses on just one of those 16”—the purported decrease in reported robberies. LAPOP’s study also analyzed crime victimization and violence, perception of insecurity, neighborhood disorder, and the role of institutions like the police, among other things. While CEPR didn’t focus on these, their study says that the concerns they raise would apply to LAPOP’s other findings as well.

“Their critique is not that our analysis is flawed … but their interpretation was different, and everyone is entitled to different interpretations, Seligson says. “We took this very seriously and we welcome more studies. No one study is going to be definitive.”

According to Dan Beeton, Director for International Communications at CEPR, one of the other “disturbing things we’re highlighting is that the study we looked at is the only publicly accessible assessment of the CARSI program. There needs to be a lot more transparency around CARSI.”

This report comes at a critical time just after the six-month anniversary of the murder of Honduran environmental rights leader Berta Cáceres. International condemnation for her murder has resulted in activists from around the world and many U.S. legislators calling for a halt to all U.S. security aid to Honduras. Most notably, Georgia Rep. Hank Johnson has introduced the Berta Cáceres Human Rights in Honduras Act.

Dana Frank, a history professor at the University of California, Santa Cruz, and an expert on human rights and U.S. policy in Honduras, explained the implications of the report specifically for Honduras.

“This underscores the almost complete lack of transparency about the actual usage of U.S. spending in Honduras,” she says. “We know very little about where this money goes and its effectiveness.

“This study underscores the problems with the Vanderbilt study as well as the dangers of not having an independent evaluation mechanism for the vast amount of aid pouring into the region.”

According to several Congresspeople writing in the Guardian, the United States has already allocated at least $18 million to Honduran police and military for 2016, and the 2017 budget plan calls for increased funding. The CEPR’s study could potentially affect the funding allocated to Central America in 2017.

Beeton explained that the CEPR hopes the report will force legislators to pause when thinking about appropriating money to Central America to fight drug trafficking and violence under initiatives like CARSI.

“We’re looking at the effectiveness in reducing crime and violence in Central America,” Beeton says. “The U.S. is giving money to security forces to conduct these anti-crime programs, but how effective are they?”

He adds, “I don’t want to understate the effects of gangs and criminal networks in the region, but there are alternative methods beyond a militarized response. Based on the data that we have, there’s no conclusive evidence that these programs are effective and producing results.”