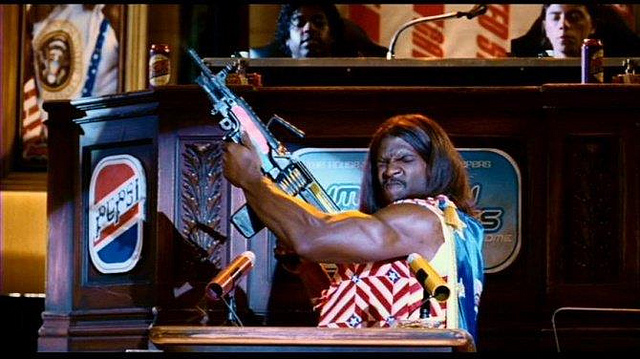 The film’s dystopia rests on a kind of anthropocene theory of democracy, whereby people’s ignorance is to blame for the downfall of society and political institutions. (Chris Messley/ Flickr)

The United States Isn’t an “Idiocracy.” It’s an Oligarchy.

In Mike Judge’s 2006 comedy Idiocracy, America kills itself with its own stupidity. But in 2016, our dystopic future looks more like Mad Max.

'We are approaching the end of the most bizarre, absurdist presidential race in U.S. history. Over the past months, thousands have questioned in social media whether Idiocracy was actually a documentary.'

Tuesday, Alamo Drafthouse Cinema and Art House Convergence—a theater chain and network of independent movie houses, respectively—will team up with League of Women Voters chapters around the country to offer screenings of Idiocracy, Mike Judge’s 2006 comedy in which America kills itself with its own stupidity. Promoting the screenings, the theater chain’s website announces that, “We are approaching the end of the most bizarre, absurdist presidential race in U.S. history. Over the past months, thousands have questioned in social media whether Idiocracy was actually a documentary.”

The subtext isn’t hard to make out: America might just be dumb enough to elect Donald Trump, and Idiocracy shows that fate carried to extremes.

The film’s dystopia rests on a kind of anthropocene theory of democracy, whereby people’s ignorance is to blame for the downfall of society and political institutions. The story begins with an extended pitch for eugenics, chiding the rich for not procreating more and the poor for doing it (literally) too much. Evolution “began to simply reward those who reproduced the most,” the film’s prologue states, “and left the intelligent to become an endangered species.”

From there, the plot is mostly an accessory to its setting. The U.S. government finds a statistically average Joe (Luke Wilson) to test a technology that could hibernate the best and brightest the armed forces have to offer, indefinitely. When the project gets disbanded, Wilson and his counterpart in the experiment, a sex worker (played by a criminally underutilized Maya Rudolph), are left sleeping for 500 years. Accidentally resurrected by an avalanche of trash in 2505, they awake to find themselves the smartest people on earth.

Basic governmental functions have devolved into dingy private-public partnerships, and the American flag has morphed into a Carl’s Jr. logo. Fields are fed with a Gatorade-like sports drink whose owners bought both the Federal Communications Commission and the Food and Drug Administration during a budget crisis, “enabling them to say, do and sell anything they want.” The crops, consequently, are dying, and the economy is in shambles. The president is a professional wrestler and cabinet positions are handed out to contest winners. The problem isn’t the state or corporations, per say, but that humanity is collectively too dumb to function.

Context here is key. Idiocracy emerged at the tail end of the George W. Bush years, when the leader of the free world dared to ask, “is our children learning?” But while Bush’s gaffes have lived on past his tenure in the Oval Office, it’s easier to forget that W’s homespun appeal was part of what landed him there. The Connecticut-born, Ivy League-educated son of a former president, the younger Bush found a way to speak to an Evangelical base that was eager to see a politician represent conservative values on a national stage. Whether Bush had a claim to those values or not is up for debate. Regardless, he helped solidify the religious right’s power in the nation’s highest office, and made it easy for coastal liberals to blame two disastrous terms on Bush’s idiocy and a class of rural Republicans who might as well have been from a different planet.

In his own way—with his own base—Trump may be playing a similar role for the “alt-right,” the band of Internet trolls that skirts a thin line between neo-fascism and the Protocols of the Elders of Zion. That said, while alt-right members might be the most deplorable segment of Trump’s base, they aren’t exactly representative. At least for now, their numbers are relatively small. Like any good populist, Trump is a voice for the voiceless—in this case, largely middle-class white men who’ve seen their fortunes decline after NAFTA and the Great Recession. Building on the foundations of both the religious right and the Tea Party’s revolution, Trump offers easy scapegoats, on the one hand, in immigrants and the political class—and, on the other, a model of doing politics that seems to run against every convention in the book.

As his rise has shown, Trump is impervious to gaffes. His persona is about dismantling the idea that gaffes should exist. Winners in Trump’s mold speak loudly, often and off the cuff, a counter to Beltway insiders’ calculated talking points. It’s why Trump is also immune to pundits’ digs that center around fact-checking and appeals to reason. Trump knows that politics has never been about telling the truth. And his policies—grounded only loosely in reality—may be the last thing that attract voters toward him.

“Trump is sound and fury and garble,” critical theorist Lauren Berlant wrote recently. “The Trump Emotion Machine is delivering feeling ok, acting free. Being ok with one’s internal noise, and saying it, and demanding that it matter.”

The logic of Idiocracy is that America has transformed into something grotesque and foreign, overrun by those other Americans, who are all feeling and no reason. It’s okay to laugh because they’re poor and wrong and mostly white—and they probably don’t go to upscale theaters like the Alamo Drafthouse Cinema.

But the right’s ascendance—in Bush and in Trump—is a project hatched by the one percent, intended to pit “real America” (in Sarah Palin’s words) against limousine liberals. Division among the 99 percent makes it easier for the 1 percent to get things done, like dismantling unions and welfare and starting wars.

With Trump polling almost neck and neck with Clinton in nearly every swing state, there’s never been a greater need for unity. The problem with Idiocracy screenings 10 years on isn’t that liberals will pack into fancy theaters to blow off some cathartic steam. It’s that it’s the wrong dystopia for understanding where we are in 2016. Life under Trump will look more like Mad Max than Idiocracy, and the only way to stop him might be to grow some empathy for the so-called idiots across the aisle and, together, punch up—not down.