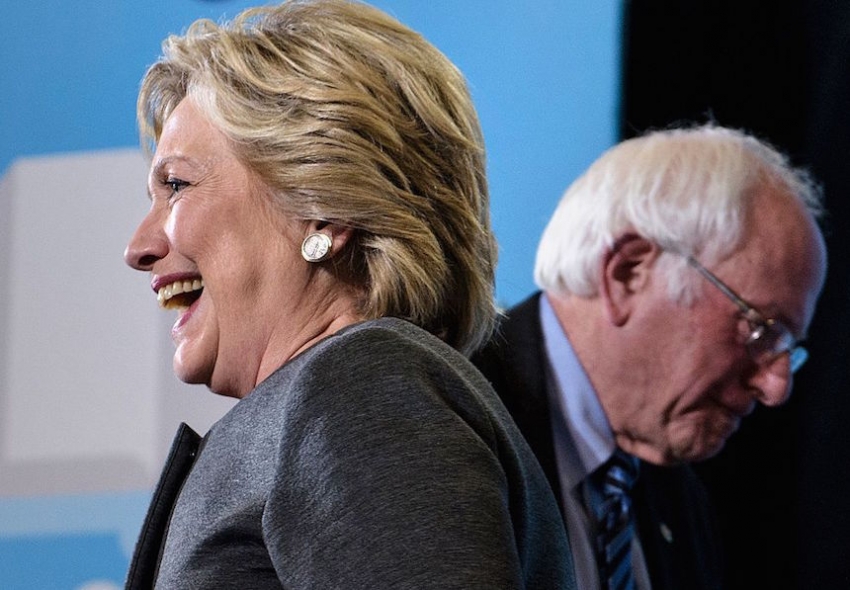 Bernie Sanders has come out in support of Hillary Clinton, but many of his supporters are slower to embrace the status quo candidate. (Photo by Brendan Smialowski / AFP / Getty Images)

Hillary Clinton’s Millennial Problem Is Because of Her Policies, Not Her Gender

If Clinton wants young people’s votes, she needs to break with the status quo.

So what is it that millennials actually want? Around 70 percent favor wealth redistribution, one Gallup poll found, and many are eager to avoid six-figure debt for things like education and routine visits to the doctor’s office.

This piece first appeared at theguardian.com.

Hillary Clinton is having a harder time beating Donald Trump than she bargained for. According to a recent poll, a staggering 44 percent of millennials say they’ll be voting for either Green party candidate Jill Stein or Libertarian Gary Johnson. The chief reason for Clinton’s dip in these polls is not—as Barack Obama claimed on Sunday—that she’s a woman (though sexism does have a lot to answer for). It’s because Clinton has assumed a third of the electorate—millennials—would vote for her out of fear of her opponent.

Millennials are the generation that has occupied Wall Street, shut down bridges for black lives and chained ourselves to the White House fence to stop the Keystone XL pipeline. Disillusioned by Obama’s embrace of war and austerity alike—especially after knocking on doors to get him elected—we know better than to put blind faith in any candidate for the Oval Office.

What Clinton can do now is prove that she’s listening. Doing so could bear fruit in the polls, but only if she shows she’s willing to part ways with her billionaire friends and push for policies that are in line with what millennials really want.

Since the Democratic national convention, Clinton and Trump have peddled their own politics of fear. Hers: of an ascendant far-right. His: of immigrants and the prospect of a truly multi-racial democracy. If Bernie Sanders’ primary campaign showed anything, though, it’s that young Americans are eager to vote for something – not against it.

Laying out plans for single-payer healthcare and a $15 minimum wage, Sanders beat Clinton among millennials in each one of the 27 states where they faced off in the primaries. And he might still be the most popular politician in the US today.

At a time when Americans across the political spectrum are turning against the status quo, Clinton seems to be embracing it. She spent weeks in August wooing millionaire donors in Silicon Valley and Martha’s Vineyard, and has chased endorsements from Bush-era official and war criminals like Henry Kissinger. It’s out of frustration that millennials will register protest votes, not ignorance.

Make no mistake: a vote for either Jill Stein or Gary Johnson in a swing state is a vote for Trump, and could land the US in a situation more dangerous and unstable than any it has known yet. Clinton is this country’s best hope right now. Especially if we want to avoid a future defined by hostility towards immigrants and people of color, the near certainty of catastrophic global warming and a disastrous economic plan ripped straight from the Tea Party’s playbook.

But making sure that painful, hate-filled future never comes to pass is up to the Clinton campaign now, and its ability to make an earnest and heartfelt appeal to the future of the Democratic party.

So what is it that millennials actually want? Around 70 percent favor wealth redistribution, one Gallup poll found, and many are eager to avoid six-figure debt for things like education and routine visits to the doctor’s office. The Movement for Black Lives released a detailed policy agenda this summer with plenty of ideas for senior Clinton staffers, and round-the-clock protests against the Dakota Access pipeline should give them a sense for where young Americans stand on new fossil fuel infrastructure and violations of indigenous rights.

For the most progressive and diverse generation in history, Trump represents virtually everything our generation is against. Clinton represents everything that hasn’t worked for us. Her embrace of politics as usual these last few months could cost her the election, putting Trump in the White House and emboldening his most dangerous supporters. Either way, Trumpism will grow so long as elites are setting the political agenda.

Millennial-led movements, meanwhile, are showing a way forward, free of fear-mongering and full of hopeful visions for a fairer future. If defeating Trump means voting for Clinton—and it does—defeating the toxic ideology that surrounds him means she needs to take these movements’ advice seriously.