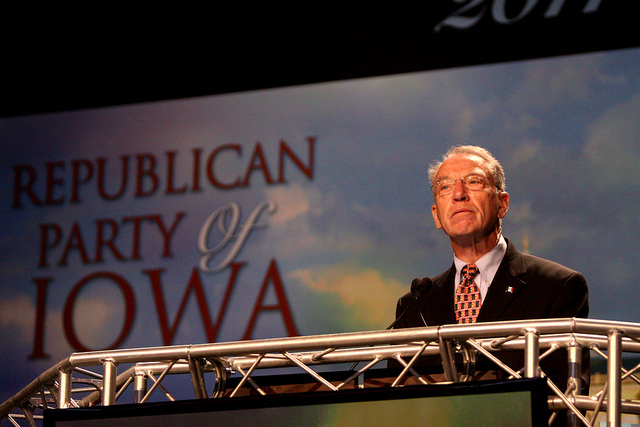 Sen. Charles Grassley is among those who were around in the late 1990s to moralize about Bill Clinton’s sexual misdeeds—but have found ways to support Donald Trump’s bid for the presidency. (Gage Skidmore/ Flickr)

'Once you lose your moral authority to lead, you're a failure as a leader.'

In 1998, House Republicans impeached Bill Clinton for having sex in the White House—specifically, for lying under oath. One of the people who later voted to remove Clinton from office was Republican Charles Grassley, a U.S. senator from Iowa since 1981.

Early in 1999, Grassley wrote a letter to his constituents explaining his vote.

“Once you lose your moral authority to lead, you're a failure as a leader,” he said. “FDR once spoke of the Presidency in this way. He said, ‘The Presidency is not merely an administrative office … It is pre-eminently a place of moral leadership.’ Mr. Clinton should take note.”

Grassley went on to say that Clinton’s “misdeeds have caused many to mistrust elected officials. Cynicism is swelling among the grassroots.” And he asked: “There's the issue of the poor example the President's actions serve for the nation, especially for our youth. Is it now okay to lie because the President does it?”

Grassley is among the politicians and pundits who were around in the late 1990s to moralize about Bill Clinton’s sexual misdeeds—but have found ways to support Donald Trump’s bid for the presidency. Grassley, who hasn’t formally endorsed Trump but has appeared alongside him, is in the midst of a re-election campaign, and Iowa has been one of the swing states where recent polling shows Trump doing well.

In the wake of a video released Friday, in which Trump talks about how he sexually assaults women, Grassley called the comments “terrible and shameful” but didn’t call on him to drop out of the race. Grassley later said that Trump’s apology was “necessary and appropriate.”

Here are two more examples (among many) of men and women moralizing about the Clinton affair. Both either actively or implicitly continue to support Trump’s bid.

James Dobson, founder of one of the Christian Right’s most powerful organizations, Focus on the Family, in a letter to supporters in 1998:

“What has alarmed me throughout this episode has been the willingness of my fellow citizens to rationalize the President’s behavior even after they suspected, and later knew, that he was lying … That disregard for morality is profoundly disturbing to me. Although sexual affairs have occurred often in high places, the public has never approved of such misconduct. But today, the rules by which behavior is governed appear to have been rewritten specifically for Mr. Clinton …

“How did our beloved nation find itself in this sorry mess? I believe it began not with the (Monica) Lewinsky affair, but many years earlier. There was plenty of evidence during the first Presidential election that Bill Clinton had a moral problem. His affair with Gennifer Flowers, which he now admits to having lied about, was rationalized by the American people … Why, then, did the American people ignore so many red flags? Because, and I want to give the greatest emphasis to this point, the mainstream media became enamored with Bill Clinton in 1992 and sought to convince the American people that ‘character doesn’t matter.’”

Ann Coulter launched her career as a right-wing pundit in 1998 with High Crimes and Misdemeanors: The Case Against Bill Clinton:

“With each new revelation about President Clinton’s apparently corrupt and sometimes illegal behavior, paid and unpaid Friends of Bill (FOBs) take up the public relations gauntlet to announce that previously abhorred conduct is now considered wholly excusable conduct … The only coherent epistemology at the moment is that once Clinton is caught doing it, it’s okay. At this rate, the entire country will soon be molesting interns, lying under oath, buying witnesses, flashing subordinates, and rifling through confidential FBI files …

“This is what it means to be a citizen in a republic—of the self-governing kind and not the banana variety. You can vote for a knave and a clown, but then you have to take some responsibility to correct your mistakes. And those who don’t vote for the clown have a responsibility to rescue the rest of the country from its foolishness. Moreover, there ought to be some responsibility attached to holding office in a government founded on the blood of patriots.”