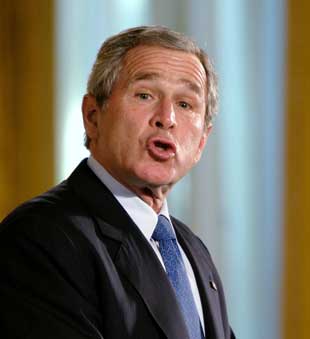 The Iraqi elections appear to authenticate the statement George W. Bush made in his January inauguration speech: “America will not pretend that jailed dissidents prefer their chains or that women welcome humiliation and servitude.”

It is difficult to disagree with Bush here: He effectively did touch the Achilles’ heel of many Western progressives, who were often disarmed by the one good argument, repeatedly evoked by Christopher Hitchens, for the war against Iraq: The majority of Iraqis were Saddam’s victims, and they would be really glad to get rid of him. He was such a catastrophe for his country that an American occupation in whatever form would be preferable to them in terms of daily survival and much lower levels of fear. We are not talking here of “bringing Western democracy to Iraq,” but of simply getting rid of the nightmare called Saddam. To this majority, the caution expressed by Western liberals can only appear deeply hypocritical—do they really care about how the Iraqi people feel?

Why, then, does the old story repeat itself in Iraq? America brings new hope and democracy to people, but instead of hailing the U.S. Army, the ungrateful people do not want it. They look the proverbial gift horse in the mouth, and America then responds like a sullen child in reaction to the ingratitude of those it selflessly helped.

With the global American ideological offensive, the fundamental insight of Graham Greene’s The Quiet American is more relevant than ever: We witness the resurgence of the figure of the “quiet American,” a naive, benevolent agent who sincerely wants to bring democracy and Western freedom. It is just that his intentions totally misfire, or, as Greene put it: “I never knew a man who had better motives for all the trouble he caused.”

The underlying presupposition is that under our skin, if we scratch the surface, we are all Americans. That is our true desire—all that is needed is just to give people a chance, liberate them from their imposed constraints and they will join us in our ideological dream. It’s fitting that in February 2003 the right-wing journalist Stephen Schwartz used the phrase “capitalist revolution” to describe what Americans are now doing: exporting their revolution around the entire world. No wonder they moved from “containing” the enemy to a more aggressive stance.

It is the United States that is now, as the defunct USSR was decades ago, the subversive agent of a world revolution. When Bush said, “Freedom is not America’s gift to the world, it is the almighty God’s gift to every man and woman in the world,” his apparent modesty nonetheless concealed, in the best totalitarian fashion, its very opposite.

Recall the standard claim of a totalitarian leader that he himself is nothing at all—his strength is only the strength of the people who stand behind him, he only expresses their deepest strivings. The catch, of course, is that those who oppose the leader do not only oppose him, but also oppose the deepest and noblest strivings of the people. And does the same not hold for Bush’s claim? If freedom effectively were to be just America’s gift to other nations, things would have been much easier—those opposing U.S. policy would be doing just that, opposing the policy of the United States as a single nation state. However, if freedom is God’s gift to humanity (and—herein resides the hidden proviso—if the United States perceives itself as the chosen instrument for distributing this divine gift to all the nations of the world), then those who oppose U.S. policy are eo ipso rejecting the noblest gift of God to humanity. No wonder many authentic theologians are appalled by these kinds of statements from Bush, detecting in them a terrifying sacrilege. We therefore know now what “bringing democracy” means: The United States and its “willing partners” impose themselves as the ultimate judges who decide if a country is ripe for democracy.

Bush was again right in opposing the idea of exporting freedom, when he said: “Freedom, by its nature, must be chosen.” The hidden catch here is that precisely in the case of Iraq, this rule was violated. The choice was obviously a forced one, not only in the sense that freedom was imposed, but also in the sense that the allegedly benevolent imposer reserved for himself the right to define what freedom is. It is instructive to remember the case of Iran: not today’s, but the Shah’s. Did not Reza Pahlavi also want to impose Western modernization, with the paradoxical result of giving birth to a “fundamentalist” revolution? From this perspective, the “successful” elections did not change anything—the true test for the United States lies ahead. What if, sooner or later, the unfortunate Iraqis will “misuse” democracy and give majority rule, not necessarily to so-called “fundamentalists,” but to anti-Western and anti-Zionist pan-Arab nationalists?

When Bush celebrated the explosive and irrepressible thirst for freedom as a “fire in the minds of men,” the unintended irony was that he used a phrase from Dostoevsky’s The Possessed. Dostoevsky used the phrase to describe the ruthless activity of radical anarchists who burned a village: “The fire is in the minds of men, not on the roofs of houses.” Today, we already see—and smell—the smoke of this fire.

In her 1979 Commentary essay, “Dictators and Double Standards,” Jeanne Kirkpatrick elaborated the distinction between “authoritarian” and “totalitarian” regimes, which served to justify the U.S. policy of collaborating with rightist dictators, while treating Communist regimes much more harshly. Authoritarian dictators are pragmatic rulers who care about their power and wealth and are indifferent toward ideological issues, even if they pay lip service to some big cause; in contrast, totalitarian leaders are selfless fanatics who believe in their ideology and are ready to put everything at stake for their ideals. So while one can deal with authoritarian rulers who react rationally and predictably to material and military threats, totalitarian leaders are much more dangerous and have to be directly confronted.

The irony is that this distinction encapsulates perfectly what went wrong with the U.S. occupation of Iraq. Saddam was a corrupt authoritarian dictator striving for power and guided by brutal pragmatic considerations—a pragmatism that led him to collaborate with the United States throughout the ’80s. The ultimate proof of this secular nature is the ironic fact that, in the Iraqi elections of October 2002, in which Saddam Hussein got a 100 percent endorsement (and thus outdid the best Stalinist results of 99.95 percent), the campaign song played again and again on all the state media was none other than Whitney Houston’s “I Will Always Love You.” One of the outcomes of the U.S. intervention is that it generated a much more uncompromising “fundamentalist” opposition that precludes any pragmatic compromises.

Recall the old story about a worker suspected of stealing: Every evening, when he was leaving the factory, the wheelbarrow he was rolling in front of him was carefully inspected, but the guards could not find anything, it was always empty—until, finally, they got the point. What the worker was stealing were the wheelbarrows themselves. This is the trick that those who claim “but the world is nonetheless better off without Saddam!” are trying to pull on us: They forget to include in their calculation the effects of the military intervention against Saddam. Yes, the world is better without Saddam—but is it better if we also include in the overall picture the ideological and political effects of this very occupation?