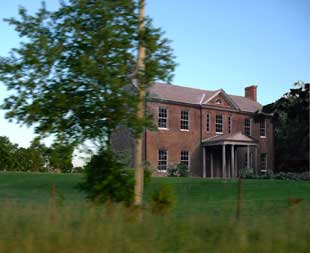 “Our story is the story of our place,” says Hannah Coulter, the protagonist and namesake of Wendell Berry’s newest novel. It is a story of “how we married and came here, moved into this old house and made it livable again … how we raised our children here, and worked and hoped and paid the mortgage, and made a pretty good farm of a place that had been hard used and then almost forgotten; how we continued, making our life here day by day, after the children were gone; how we kept this place alive and plentiful, seeing it always as a place beyond the war.”

The place in question is a small acreage in the fictional farming community of Port William, Ky. The “we” is Hannah and her second husband, Nathan, whom she marries after her first spouse is lost in World War II. In a wider sense, however, “we” refers to the entire community that surrounds them—a group that Berry and his characters call the Port William “membership”—which shares in the labors, sorrows and joys of rural life.

Wendell Berry has staked his entire career as a novelist on this membership. With Hannah Coulter and with That Distant Land, a recently released volume collecting 23 short stories about Port William’s inhabitants, he has wagered that understanding the ordinary details of their modest lives could be relevant—even urgent—in living our own.

Most who cherish the work of Wendell Berry think of him first as an essayist. With his nonfiction he has established himself as the nation’s preeminent defender of small farms, as a questioner of technology, and as an opponent of war and environmental exploitation. Admirers have dubbed him the “conscience of Kentucky.” He is also well known as a poet, with excerpts from his many volumes of verse showing up in places as unusual as an episode of “ER.”

But Berry, who turned 70 this past year, has also written seven novels. These, plus the now-collected stories, trace five generations of the Port William membership. Together they make the town into one of the most intimately rendered communities in American literature since William Faulkner’s Yoknapatawpha County, Miss.

In simple, direct prose, Hannah Coulter progresses through its protagonist’s impoverished upbringing, her marriages, her struggles in raising children, and her later trials tending an empty nest and mourning those who have passed. That Distant Land, meanwhile, chronicles happenings in the larger community. In both cases Berry presents stories free of artifice. (“Persons attempting to find a ‘text’ in this book,” Berry warns in a prologue to an earlier Port William novel, “will be prosecuted.”) Whether he is describing a turn-of-the-century hog killing, a Depression-era harvest crew bringing in the tobacco crop, or a ’90s conversation between the widowed Hannah and a land-hungry strip-mall developer, the strength of Berry’s fiction comes from his straightforward loyalty to his characters—to their speech, their convictions and their lifestyles.

“I am thinking of living right on, right here,” a determined Hannah tells the glad-handing developer. His “anxiety … almost- panic” escalates when she cagily adds that she has “given some thought to donating [her farm] as a wildlife preserve.”

‘Well!” is all he can muster in reply.

Port William lifestyles admittedly appear antiquated. Elderly residents’ past love affairs, in particular, seem exceedingly innocent, moving from furtive looks to marriage proposals with very few stops in between. Yet Berry loads the characters’ glances with longing, so that even a romantically jaded reader is ready to cheer on the bashful farmers when they finally confess their intentions.

Berry’s stories lack the dark undercurrent that runs through much of the literature of rural society, including Faulkner’s. War touches Port William; it cuts short Hannah’s first marriage and scars her second husband Nathan, a veteran whose sleep is haunted by the “blasted and burnt, bloodied and muddied and stinking battlegrounds of Okinawa.” But in general, Port William has a deficit of meanness and vice. Most trouble comes from temporary lapses into insanity, sometimes alcohol-induced: A group of townspeople takes a bit too much pride in Kentucky moonshine and ends up putting on a raucous display in the governor’s inaugural parade; a somewhat senile Port William elder takes a younger man on a harrowing—but ultimately harmless—ride down the wrong side of the interstate. Rather than lasting damage, these episodes tend to produce stories for the grandchildren to warmly remember.

Berry seems to share the attitude of his country lawyer, Wheeler Catlett. Though Wheeler has seen those who come to him reveal their “greed, arrogance … cowardice, and sometimes inviolable stupidity,” he has nevertheless “believed in their generosity, goodness, courage and intelligence.”

The author saves his condemnation for those who look down upon country people from the perch of urban modernity. Berry’s “membership” doubt that city-dwellers, for all their advanced gadgetry, have discovered anything truly worth knowing. One of Hannah’s sons leaves the farm to pursue a degree in information and communications technology, a topic far beyond his parents’ frame of reference.

“Communication of what?” Nathan asks.

The political sensibility that emerges in the Port William tales is appealing both for environmentalists and progressives trying to reassert their own brand of moral fiber. It is deeply rooted in place and profoundly antagonistic to market values. “Everything about a place that’s different from its price is a gift,” says Wheeler Catlett, reflecting on the sale of a farm. “Everything about a man or woman that’s different from their price is a gift.”

Yet for all its virtue, Port William is dying. By the turn of the millennium, the Feltners, the Rowanberrys, the Penns and the Coulters are all but gone, and the family farms that were central to their lives are vanishing. Hannah, whose children have moved to the city, explains: “The old neighborliness has about gone from it now. … People are living as if they think they are in a movie. They are all looking in one direction, toward ‘a better place.’ ”

We don’t have to yearn to live in Berry’s old-time community to take this as a challenge. Indicting the ideal of “a better place,” his characters prod us to question whether, in our perpetual search for something more, we will ultimately be satisfied with any place, no matter how sophisticated.

And it is in grappling with this question that readers can appreciate Berry’s decision to root his 50 years of fiction in a single locale, one that looks most ordinary and modest. With these two volumes he tells us that the tasks of making a house and caring for the land, of finding love and raising children, of sowing peace and honoring the dead are not just the mundane details of life. They are life. To require a more glamorous setting for fiction is to abandon the responsibilities of serious literature. For the novelist, too, there can be no better place.