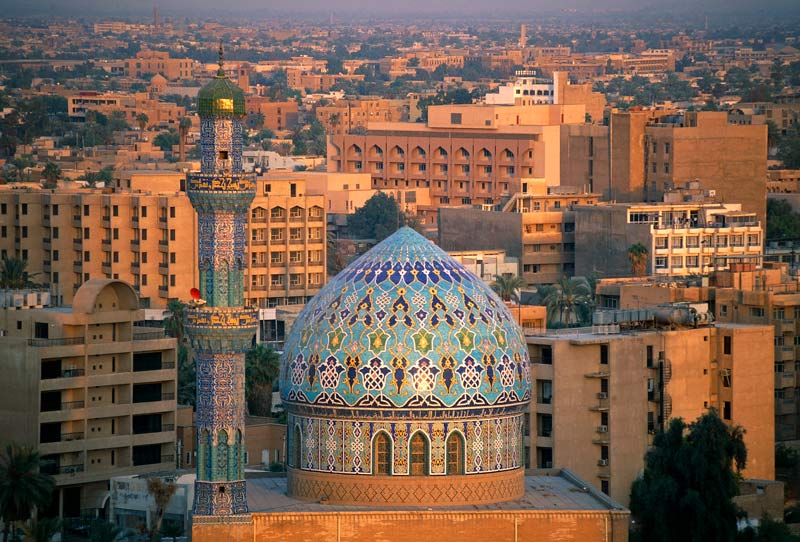 Sci-Fi Iraq: Authors Envision Their Country in 2103, a Century After the U.S. Invasion

In a new collection, Iraqi writers explore their nation’s future, and ridicule their former occupiers.

Considerably more sobering is a recurring theme in the collection of characters developing mysterious, incurable diseases.

What might Iraq look like a century from now? That question is the organizing premise of Iraq + 100, a new short-story collection edited by award-winning Iraqi writer and filmmaker Hassan Blasim. As Blasim notes in his introduction, futuristic fiction isn’t a standard form for Iraqi prose—typically, it tends toward grim contemporary realism, historical fiction or what translates as “political fantasy”: political fiction with elements of magical realism. Even Ahmed Saadawi’s boundary-breaking Frankenstein in Baghdad, forthcoming in English next year, is firmly grounded in the present.

As such, Iraq + 100 won’t tell American readers much about the broader trends in Iraqi literature. But it might well stretch the imaginations of those accustomed to seeing Iraq as a place of endless violence. An avowed literary outlier, Blasim has long been interested in new possibilities of form and literary cross-pollination. In 2013, he and Comma Press began commissioning stories for Iraq + 100, set 100 years after George W. Bush’s declaration of “mission accomplished.” Though futuristic, the resulting works can’t all be called science fiction; some are noir, romance or satire.

Currently available in English with an Arabic edition forthcoming, Iraq + 100 is a welcome departure from the steady stream of books about Iraq since 2003. Most focus on the war and were written by U.S. and U.K. veterans, journalists or even torturers, as with Eric Fair’s 2016 memoir Consequence. In these works, Iraqi lives serve as little more than a backdrop for the heroism or moral agonies of the Anglo protagonist. A few notable examples foreground Iraqi perspectives, including Elliott Colla’s Baghdad Central, but it’s hard to think of anything that affords Iraqis the chance to turn around and ridicule their invaders in quite the same way as Iraq + 100.

Each version of the year 2103 has a different flavor. In Ibrahim al-Marashi’s “Najufa,” terrorism has moved to America, where we find the humorously named “CAKA, the Christian Assembly of Kansas and Arkansas.” “Kahramana,” by the pseudonymous Anoud, is the only story that imagines a future U.S./NATO presence in Iraq. Here, the titular Kahramana escapes from the Islamic Empire just before her marriage to its leader, a man whom the state newspaper refers to as “the great, the brave lion, the sword of Allah, Amir Mullah Hashish.” The Westerners make a big show of the beautiful Kahramana, putting her on a billboard and giving her a “Courageous Women’s Award.” But in the end, the fickle media forget her and her bid for asylum in the U.S. is quietly rejected.

Other stories depict Iraq under the boot of new occupiers. In Khalid Kaki’s “Operation Daniel,” translated by Adam Talib, it’s the Chinese who have taken over. The story bundles anxiety about China’s tentacles in poorer countries into a dystopian portrait of a Saddamist, tell-on-your-neighbor regime. It’s forbidden to speak Syriac, Arabic, Kurdish or even English—a detail that echoes the past repression of minority tongues.

In Hassan Blasim’s techno-utopia “The Gardens of Babylon,” corporate rights seem to have unseated national empires. Chinese companies have dominion, although they “have also given the inhabitants of Babylon the privilege of Chinese citizenship, so we Babylonians can go and live in China as if it’s our own country.” But all is not well in Babylon’s techno-gardens, full of tiger droids and smart trees, as corporations have taken over the water supply and are fighting Water Rebels outside the city.

Hassan Abdulrazzak’s “Kuszib,” which translates to “Pussycock,” is set in an even stranger future. The reader slowly realizes that the point-of-view characters aren’t humans; they’re middle-class space creatures who look down on humans and drink our blood, distilled into alcohol. In a macabre turn, the alien butcher who gives a demonstration on how to hack apart humans is dressed in ISIS orange.

A middle-class alien wife, who is a clear echo of a middle-class American or Brit, has qualms about the enslavement and butchery of humans and wonders if the poor things might, after all, have rich interior lives. But she can’t quite bring herself to give up eating these yummy people and ultimately decides that their interior lives might not matter so much.

While the satire in Iraq + 100 is aimed primarily at occupiers, its stories also occasionally send up the aspirations of the occupied. In Bader’s inventive “The Corporal,” a soldier named Sobhan who was killed during the Iraq War is sent back to earth by God—who, thanks to a vexing backlog in the queue of souls waiting to enter the afterlife, is still working his way through those who died in 471 B.C.E.

Way back in 2003, you see, Sobhan secretly wanted the Americans to beat his army. After all, wouldn’t they turn Iraq into a paradise, much like the ones he’d seen on TV? Sobhan even carried a flower in his pocket to give to an American soldier, but was shot in the forehead before he could get his hand out of his pocket. When Sobhan is sent back to earth in 2103, he is stunned to find his country in beautiful shape while his beloved America has collapsed into sectarian war. Iraq is now secular and America is “gripped by religion” and has turned into a rogue state. “The Corporal” has a memorable laugh at both the Americans’ and the Iraqis’ expenses, while undercutting American exceptionalism.

Considerably more sobering is a recurring theme in the collection of characters developing mysterious, incurable diseases. This motif has obvious roots in the recent past. Iraq has seen skyrocketing cancer rates since the invasion of 2003, during which the U.S. army employed depleted uranium projectiles, among other known cancer-causing agents. An August 2016 report in the journal Environmental Monitoring and Assessment found “a variety of birth defects, some never seen before” in post-war Iraq.

Writer-doctor Alhaboby’s “Baghdad Syndrome,” translated by Emre Bennett, is both romance and medical noir. In this story, protagonist Sudra Sen Sumer is an architect hired to redesign what was once Baghdad’s “lovers’ square.” Decades earlier, the statues at its center, Scheherazade and Shahryar, mysteriously disappeared. Sudra searches for these statues while he grows sicker with the widespread but little-understood Baghdad Syndrome, and the threat of permanent blindness hangs over him. Powerless to understand the mechanisms of his disease, which is rooted in the war of a former era, Sudra is charged with the desire to know what happened in one square, and to repair it.

Iraq is often portrayed as a place that has always been violent and always will be. By germinating new narrative possibilities, Iraq + 100 provides new ways of imagining the next century that go beyond seeing the present as eternal.

M. Lynx Qualey is the founder of ArabLit.org, as well as a literary critic, journalist, editor, ghostwriter, publishing consultant and translator.