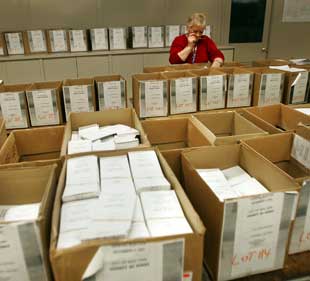 Despite what you may have heard, the exit polls were right

Recall the Election Day exit polls that suggested John Kerry had won a convincing victory? The media readily dismissed those polls and little has been heard about them since.

Many Americans, however, were suspicious. Although President Bush prevailed by 3 million votes in the official, tallied vote count, exit polls had projected a margin of victory of 5 million votes for Kerry. This unexplained 8 million vote discrepancy between the election night exit polls and the official count should raise a Chinese May Day of red flags.

The U.S. voting system is more vulnerable to manipulation than most Americans realize. Technologies such as electronic voting machines provide no confirmation that votes are counted as cast, and highly partisan election officials have the power to suppress votes and otherwise distort the count.

Exit polls are highly accurate. They remove most of the sources of potential polling error by identifying actual voters and asking them immediately afterward who they had voted for.

The reliability of exit polls is so generally accepted that the Bush administration helped pay for them during recent elections in Georgia, Belarus and Ukraine. Testifying before the House Committee on International Relations Dec. 7, John Tefft, deputy assistant secretary of state for European and Eurasian affairs, explained that the Bush administration funded exit polls because they were one of the “ways that would help to expose large-scale fraud.” Tefft pointed to the discrepancy between exit polls and the official vote count to argue that the Nov. 22 Ukraine election was stolen.

Last November in the United States, as in Ukraine, the discrepancy between the presidential exit polls and the tallied count was far beyond the margin for error. At the time, Edison Media Research and Mitofsky International, the two companies hired to do the polling for the National Election Pool (a consortium of the nation’s five major broadcasters and the Associated Press), didn’t provide an explanation for how this happened. They promised, however, that a full explanation would be forthcoming.

On Jan. 19, on the eve of the inauguration, Edison and Mitofsky released their report, “Evaluation of Edison/Mitofsky Election System 2004,” which generated headlines such as MSNBC’s “Exit Polls Prove That Bush Won.” But, the report does nothing of the sort. It restates a thesis that the pollsters previously intimated—that the discrepancy was “most likely due to Kerry voters participating in the exit polls at a higher rate than Bush voters.” But the body of the report offers no data to substantiate this position. In fact, data presented in the report serve to rebut the thesis, and bolster suspicions that the official vote count was way, way off.

The report states that the difference between exit polls and official tallies was far too great to be explained by chance (“sampling error”), and that a systematic bias is implicated.

With that statement the pollsters confirm the discrepancy we initially documented. The exit polls were based on more than 70,000 confidential questionnaires completed by randomly selected voters as they exited the polling place. The overall margin of error should have been under 1 percent. But the official result deviated from the poll projections by more than 5 percent—a statistical impossibility.

The pollsters report that the precincts were appropriately chosen for sampling, in that the aggregated official results from the sampled precincts accurately reflected the official statewide ballot counts.

In saying this, Mitofsky and Edison vindicate a key piece of their methodology—the representativeness of their samples. If the fault indeed lies with the exit polls, the range of possibilities for error is therefore narrowed.

Finally, they report that the source of error is, in fact, within-precinct error (WPE), the difference between official precinct tallies and the exit poll samples from those same precincts. On average, across the country, the President did 6.5 percent better in the official vote count, relative to Kerry, than the exit polls projected.

This admission further narrows the range of possibilities. If the polling data are accurate, the only remaining possibilities are “non-response bias” (i.e., Bush voters disproportionately did not participate in the exit polls) and/or errors in the official tally.

However, having gotten to this point in their argument, Mitofsky and Edison summarily dismiss the possibility that the official count was wrong. They reject the election fraud hypothesis because, they say, “precincts with touch screen and optical voting have essentially the same error rates as those using punch-card systems.”

Indeed, they do. But this fact merely suggests that all three of these systems may have been corrupted. Indeed, there is little question about problems associated with both punch card systems (recall the Florida debacle in 2000) and mechanical voting machines, which are generally unreliable, vulnerable to tinkering and leave no paper trail. That’s why both systems have been slated for termination under the Helping America Vote Act of 2002.

Notably, Mitofsky and Edison unsucessfully try to explain away the fact that, according to their data, only in precincts that used old-fashioned, hand-counted paper ballots did the official count and the exit polls fall within the normal sampling margin of error.

Further, data that are underplayed in the report provide support for the hypothesis that the election was stolen.

First, the report acknowledges that the discrepancy between the exit polls and the official count was considerably greater in the critical swing states. And while that fact is consistent with allegations of fraud (if you are going to steal an election you go after votes most vigorously where they are most needed), Mitofsky and Edison suggest, without providing any data or theory to back up their claim, that this discrepancy is somehow related to media coverage.

Second, in light of the charges that the 2000 election was not legitimate, the Bush/Cheney campaign would have wanted to prevail in the popular vote. If fraud was afoot, it would make sense that the president’s men would steal votes in their strongholds, where the likelihood of detection is small. Lo and behold, the report provides data that strongly bolster this theory. In those precincts that went at least 80 percent for Bush, the average within-precinct-error (WPE) was a whopping 10.0—the numerical difference between the exit poll predictions and the official count. That means that in Bush strongholds, Kerry, on average, received only about two-thirds of the votes that exit polls predicted. In contrast, in Kerry strongholds, exit polls matched the official count almost exactly (an average WPE of 0.3).

Other report data undermine the argument that Kerry voters were more likely to complete the exit poll interview than Bush voters. If this were the case, then one would expect that in precincts where Kerry voters predominated, the cooperation rate would be higher than in pro-Bush precincts. But in fact, the data suggest that Bush voters were slightly more likely to complete the survey: 56 percent of voters completed the survey in the Bush strongholds, while 53 percent cooperated in Kerry strongholds.

The exit polls themselves are a strong indicator of a corrupted election. Moreover, the exit poll discrepancy must be interpreted in the context of more than 100,000 officially logged reports of irregularities during Election Day 2004. For many Americans, if not most, mass-scale fraud in a U.S. presidential election is an unthinkable possibility. But taken together, the allegations, the subsequently documented irregularities, systematic vulnerabilities, and implausible numbers suggest a coherent story of fraud and deceit.

What’s more, the exit poll disparity doesn’t tell the whole story. It doesn’t count those voters who were disenfranchised before they even got to the polls. The voting machine shortages in Democratic districts, the fraudulent felony purges of voter rolls, the barriers to registration, and the unmailed, lost, or cavalierly rejected absentee ballots all represent distortions to the vote count above and beyond what is measured by the exit poll disparity. The exit polls, by design, sample only those voters who have already overcome these hurdles.

The thesis of the Mitofsky/Edison exit poll report and the headlines that it generated are curiously detached from the numbers in the report itself. Statisticians who have studied the exit polls find substantial evidence to support the thesis that the vote counts—not the exit polls—were inaccurate.

Apparently, the pollsters at Mitofsky and Edison have found it more expedient to provide an explanation unsupported by theory, data or precedent than to impugn the machinery of American democracy. Unfortunately, their patrons in the media find it correspondingly preferable to latch onto a non-confrontational thesis, however implausible, than to even suggest the possibility of foul play.

A comprehensive analysis of the Edison/Mitofsky report has been posted here.

Steve Freeman is on the faculty of the Center for Organizational Dynamics at the University of Pennsylvania, where he teaches research methodology. Freeman’s research on the 2004 election will be published in a book—co-written with In These Times Editor Joel Bleifuss—by Seven Stories Press this spring. Josh Mitteldorf teaches statistics at Temple University and is a volunteer at USCountVotes.org.