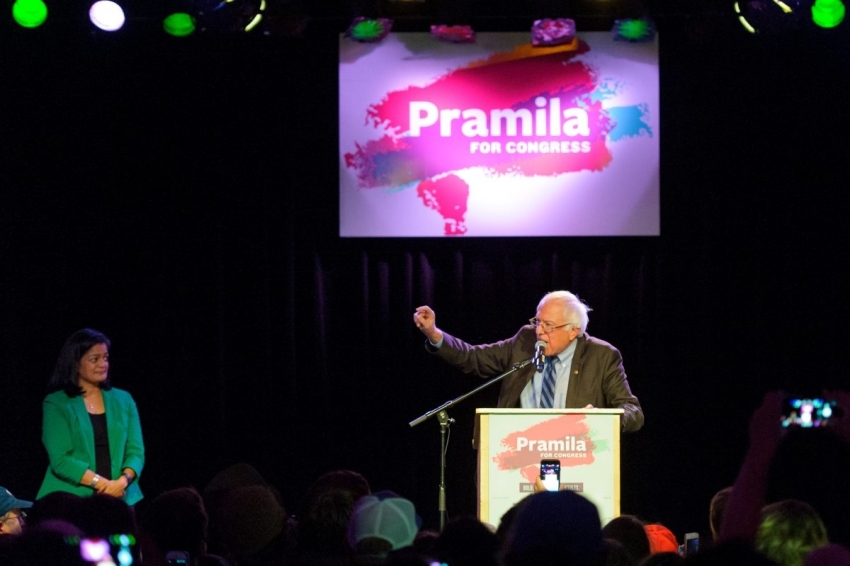 “Our Revolution” brims with the same righteous indignation and relentless optimism that drew bigger and bigger crowds to his rallies.

'We need to push the Democratic Party to once again be the party of the people.'

Bernie Sanders’ segue from presidential candidate to barnstorming author was seamless. In between the Democratic National Convention in July and hitting the stump this fall to boost Hillary Clinton’s stock in battleground states, Sanders cranked out a 450-page book, which hit bookstores November 15. The author was not far behind, with sold-out appearances from Boston to San Francisco.

Often, quickie books from trade publishers hoping to capitalize on an author’s newly-achieved celebrity are nothing more than ghost-written schlock. Campaign memoirs—like the authorized biographies or ghosted autobiographies of presidential hopefuls—aren’t often memorable either, even when they display some evidence of real candidate involvement or reflection. But like Sanders’ 2016 campaign, his book, Our Revolution: A Future to Believe In, greatly exceeds expectations.

In the first third of the book, we get an insider account of his plunge into presidential politics when few in the corporate media, the Democratic Party or the AFL-CIO took his democratic socialist “fringe” candidacy seriously. Sanders also recounts his early life in Brooklyn, his activism at the University of Chicago during the 1960s and his four-decade career in Vermont public life.

The author’s description of the grassroots struggle to transform municipal government during his eight years as Burlington mayor is particularly instructive for progressives thinking about running for local office. As Sanders proudly writes, the electoral coalition “formed in 1982, became the foundation for progressive third party politics in Vermont. Not only has it continued in Burlington to this day, electing two progressive mayors after me, it has spread statewide.”

With representation in both houses of the Vermont legislature, the Vermont Progressive Party (VPP) has, according to Sanders, become “one of the most successful and long-standing third parties in America.” Its singular status was further confirmed on November 8, when Sanders-backed David Zuckerman, a VPP state senator and working-class oriented organic farmer, got elected lieutenant governor—marking the first time a progressive, other than Sanders, has succeeded in a Vermont-wide race.

In the remaining two-thirds of Our Revolution, Sanders outlines his agenda for the country and talks about what it will take to achieve it. His substantive proposals will be familiar to the millions of people who voted for him, and include recommendations on everything from health care, criminal justice reform, trade, Wall Street regulation, bank restructuring and free public higher education to combatting climate change, creating clean energy jobs, overhauling “our broken immigration system” and getting big money out of politics.

Not surprisingly—for someone from a state with large rural areas and relatively few homicides—Sanders’ agenda does not emphasize gun control, although he does confess to having mishandled that issue on the national debate stage.

In a well-documented chapter called “Corporate Media and the Threat to Our Democracy,” Sanders updates his long-time critique of the handful of multinational corporations that own a lot of the media and have an outsized influence on what people see and hear. Sanders himself was, of course, a case study in hostile or non-existent coverage by major newspapers and TV networks for much of his campaign.

Both as a campaign history and progressive policy guide, Our Revolution brims with the same righteous indignation and relentless optimism that drew bigger and bigger crowds to Sanders’ rallies. It concludes with the author’s oft-repeated call for follow-up activity now at the local level:

“Run for the school board, city council, state legislature. Run for governor. Run for Congress. Run for the Senate. Run for president. Hold your elected officials accountable. Know what they’re doing and how they’re voting and tell your neighbors.”

Going local with “Our Revolution”

Sanders’ encouragement and support for like-minded candidates began during his own “testing the waters” tour of the country, as a not-yet-declared contender for the White House. He was invited to Richmond, California, in 2014 by Green mayor Gayle McLaughlin and other progressive city council candidates facing an avalanche of corporate spending against them by Chevron, the largest employer in town.

Sanders writes that his town hall meeting “turned out to be one of the largest and loudest audiences that I had spoken to since I began traveling around the country.” In Richmond, four candidates he backed two years ago won their elections, as did two more members of the Richmond Progressive Alliance this fall. This time, they were endorsed by Our Revolution, the post-campaign organization created by former campaign staff and Sanders volunteers. Richmond’s top vote getter was 26-year-old Melvin Willis, an African-American Bernie fan, rent control advocate and local organizer for the Alliance of Californians for Community Empowerment. Elsewhere in Northern California, Our Revolution-assisted candidates won mayoral races in Berkeley and Stockton.

Nationwide, Our Revolution endorsed 106 local, state, and federal candidates and 34 ballot initiatives. Fifty-eight of those candidates were successful; twenty-three of the ballot measures succeeded, including several dealing with campaign finance reform. Among those backed by Our Revolution was Mike Connolly, a lawyer and community activist in Cambridge, Massachusetts.

Like Zuckerman in Vermont, Connolly competed in the Democratic primary to clear the field. He narrowly defeated a 12-term Democratic incumbent backed by most Bay State unions and nearly all his Beacon Hill colleagues. On November 8, Connolly won the seat, running unopposed in the general election. Three other Our Revolution-backed legislative candidates in Massachusetts, all incumbents, also won their primary battles and/or general election campaigns as well. They were state Sens. Pat Jehlen and Jamie Eldridge and state Rep. Mary Keefe.

Connolly is now working with Our Revolution supporters to build a new state structure that better links issue-oriented campaigns with electoral politics.

“We need to push the Democratic Party to once again be the party of the people,” he says. “We need to turn politics around so that it is movement-centered and driven by the grassroots.”

At a Boston book tour stop in late November, Sanders stressed similar goals in his talk to an estimated 1,000 people. Bernie's mostly young fans paid $33 to attend and got a copy of Our Revolution. The author was in fine form, sharing clear, concise, and useful insights into the lessons of his campaign and the challenges under President-elect Donald Trump. During the question period, a young Latina woman who was thinking of running for office herself, asked for Sanders' advice.

The crowd chanted “Bernie, Bernie” but the future clearly belonged to Sanders-inspired candidates of the sort he described, following in his footsteps and getting involved in politics at the local, state and national levels.

Steve Early was a longtime New England staff member of the Communications Workers of America. He was active in Labor for Bernie and is the author of Refinery Town: Big Oil, Big Money, and the Remaking of An American City, which is about the changing politics of Richmond, California. Rand Wilson works for SEIU Local 888, was a volunteer organizer for Labor for Bernie, and a Sanders delegate from Massachusetts at the 2016 Democratic National Convention. In 2006, he was the Working Families Party candidate for state auditor in the Bay State.