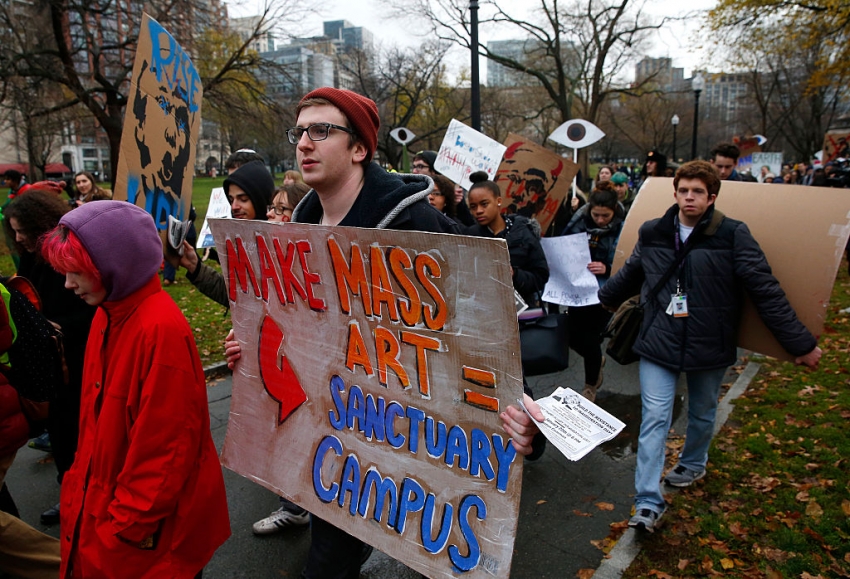 Students at some 100 colleges and universities nationwide have joined the sanctuary campus movement. (Photo by Jessica Rinaldi/The Boston Globe via Getty Images)

From Cities to Campuses: The New Sanctuary Movement for Trump’s America

Activists are rallying to protect immigrants in their communities, one campus at a time.

"Trump’s border wall has found its equal and opposite reaction in the sanctuary movement, which has flipped a symbol of violent exclusion and turned it into an emblem of integration."

How do you topple a wall? Build your own.

While Donald Trump continues to peddle his grand plan for a gargantuan wall to seal the southern border, another construction effort is unfolding in communities across the country to create “sanctuaries”—in the form of designated spaces meant to protect immigrants from federal crackdowns.

Sanctuaries have long fought for the emotional and physical infrastructure of compassion. They have often occupied religious spaces, such as churches or mosques, offering unconditional protection under the grace of some higher power. The sanctuary movement of the 1980s, which aimed to protect Central American refugees living in the United States, was led in part by progressive clergy.

More recently, municipalities like San Francisco have become sanctuary cities in order to declare, publicly, that they are invoking their constitutional authority to apply discretion when enforcing federal immigration law. We now also have sanctuary campuses.

So far, students at some 100 colleges and universities nationwide have joined the sanctuary campus movement through their participation in campaigns and direct actions to protect undocumented people in their communities. In mid-November, for example, hundreds of students, faculty and campus community members at the University of California, San Diego issued a letter calling on the administration to “immediately undertake measures to make the campus a sanctuary for undocumented and other students, staff, contract workers, and their families who have been targeted by President-elect Trump’s proposed policies.”

On December 1, campus activists from Washington state to New York held demonstrations in support of the sanctuary surge. The coordinated actions were paired with dozens of pressure campaigns that targeted college administrators. Organizers sought to make their presence known to a fiercely anti-immigrant incoming administration and to communicate their commitment to mutual protection within their own communities. About 28 campuses have officially declared themselves to be sanctuary campuses so far.

Thais Marques, a student protester at Rutgers University told Democracy Now!: “I’m undocumented, so this really matters to me because it directly affects my life. But also, I’ve seen what deportations do to families … And this is just to show our community that it’s okay to come out as unafraid and unapologetic and really show our resilience that we’re going to fight.”

Rutgers University's president has stopped short of officially labeling the school a sanctuary campus, but has promised the administration will work to protect its students from invasive immigration enforcement measures and “will not share private information unless required by law or a court order.”

The principles behind the sanctuary campus movement are straightforward. It’s a movement of non-cooperation that most campuses could follow simply by not letting federal immigration authorities interfere with business as usual. This could range from upholding a policy of non-discrimination and committing to protecting the confidentiality of students' immigration status, to more proactively resisting demands to assist with immigration investigations and providing legal aid to protect students and workers facing deportation.

Movimiento Cosecha, a social media-driven activist network that is pushing for pro-sanctuary policies, has outlined a series of specific practices institutions can undertake, including:

Still, the specific practices entailed in providing sanctuary are more about creating a compassionate social climate than they are about institutional policies. The idea of sanctuary is always aspirational. So it was a generation ago, when church leaders established sanctuary spaces and declared they could no longer stand by and let migrant communities be senselessly brutalized and jailed.

Trump’s border wall has found its equal and opposite reaction in the sanctuary movement, which has flipped a symbol of violent exclusion and turned it into an emblem of integration. As a cultural intervention led by youth, the sanctuary movement stands as a radical rebuke to a fractured political landscape.

The imaginary “security” agenda Trump campaigned on represents a cowardly form of protection. It proposes recoiling from a world of uncertainty rather than grappling with its complexity.  Border walls demarcate a zero-sum worldview, which includes “us” at the expense of “them,” and that hordes wealth on one side in order to pauperize those on the other.

In contrast, the walls of a sanctuary aren't about keeping people “safe from outsiders.” The push for sanctuary campuses speaks to a desire to build habitats for compassion, projecting an integrated cultural mosaic against a legal architecture of incarceration and exclusion. For the thousands who marched after the election in support of sanctuaries, the creation of protected campuses would create a platform of mutual support.

There’s been much debate recently around “safe spaces” on college campuses. Conservative reactionaries decry student activists for seeking to “coddle” students' liberal sensibilities by suppressing political debate. But while the campus culture wars over racial, gender and ideological identity might be dismissed as abstract or frivolous, the recent mass mobilization around immigrant rights in educational communities shows how vital an actual “safe space” can be for people in crisis.

When young people's imagination transforms a campus into a sanctuary, schools start to bridge borders just by helping communities hold onto each other. Students who are blessed with a space to learn and protest peacefully have a duty to deploy their resources to protect vulnerable people in their midst.