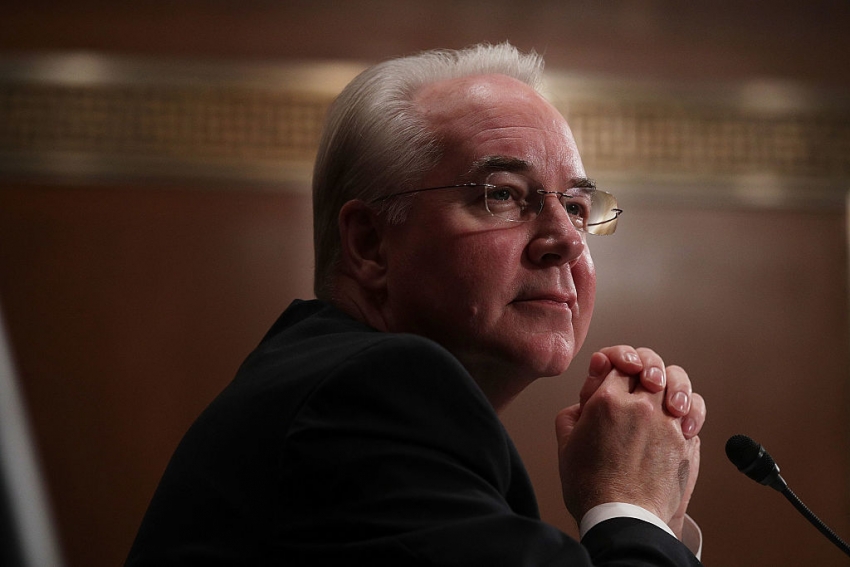 Tom Price Is a Horrible Choice for Health Secretary

The Georgia representative redefines what it means to have conflicts of interest.

"Could Price violate the Hippocratic promise to 'do no harm'? Of course he could. Indeed, he seems intent on it."

Donald Trump’s nominee for Secretary of Health and Human Services (HHS) faced sharp questioning on the ethics of his stock deals—among other issues—at a hearing Wednesday before the Senate Health, Education, Labor and Pensions Committee. Perhaps the most damaging inquiries revolved around a “sweetheart deal” that allowed Rep. Tom Price to buy stock of Australian biotech company Innate Immunotherapeutics as one of a select group of “sophisticated U.S. investors,” as Kaiser Health News reported. After he took advantage of this investment opportunity, the company’s stock price soared.

Things got tense at the hearing when Price acknowledged, in response to questions from Sen. Patty Murray (D-Wash.), that he bought stock after learning about the company from Republican Rep. Chris Collins (R-N.Y.), another investor, who is also on the company’s board. As the Huffington Post’s Paul Blumenthal notes, this raises the specter of insider trading—so long as Price acted on information that was not public. Moreover, as Murray noted, Congress was then debating the 21st Century Cures Act, legislation that had “several provisions that could impact drug developers like Innate Immunotherapeutics.” The bill passed last month.

Shocking? Yes. But the sleazy stock buy is actually just a single episode in a long political career riddled with eyebrow-raising moves—all of which make Price utterly unacceptable as health secretary.

Price’s medical specialty is orthopedic surgery, but he is perhaps better known as a savvy operator both serving and profiting from the “medical-industrial complex.”

In the last four years, the Georgia representative has traded in excess of $300,000 in health-related stocks, while simultaneously advancing bills with relevance for those companies and also receiving campaign contributions from the very same enterprises, Wall Street Journal reported in December.

Another issue raised at the hearings, including by Sens. Elizabeth Warren (D-Mass.) and Al Franken (D-Minn.), was his purchase last year of stock in a medical device company, Zimmer Biomet. Within a week of that purchase, Price introduced a bill that would have directly benefited the company by protecting it from regulation, as originally reported by CNN.  Subsequently, the company donated to Price’s campaign. (Price contends that his stock account is managed by a stock broker, and that he didn’t know about the purchase until later.)

Be that as it may, Price has shown himself to be a consistent advocate for various corporate health interests over the years, frequently going “to bat for companies whose executives and employees have generously contributed to his campaigns and political action committees,” Kaiser Health News reported.

When powerful national healthcare policymakers have financial interests in healthcare companies, a form of insider trading is all but inevitable. Such individuals always have access to at least one rather valuable nonpublic stock tip: their own future policy plans. Legal or not, these ties are rotten.

And yet, none of this is the real reason why Price would make for a terrible health secretary. For that, look to Price’s evident intent to eviscerate the healthcare safety net, his disdain for LGBT rights, his regressive vision on reproductive healthcare and his climate change denialism.

Indeed, it would be unfair to cast Price as little more than a tool of the medical-industrial complex. He is a true believer in a coherent right-wing healthcare ideology. He is also, it turns out, a member of a fringe-conservative medical group, the Association of American Physicians and Surgeons, which—according to a 2009 Mother Jones profile—sees no real role for government in healthcare, has shilled for the tobacco industry and publishes a journal that periodically espouses fake science, including articles calling into question vaccine safety.

In spite of his record, at least two mainstream medical groups disgracefully dashed to endorse Price in the wake of his nomination. The American Medical Association (AMA) praised Trump’s pick and urged his prompt confirmation, harkening back to the group’s reactionary past. Even more inexplicable was the endorsement of the Association of American Medical Colleges (AAMC), which represents U.S. medical schools. (Other medical groups, including Physicians for a National Health Program—in which I am active—as well as the National Physicians Alliance, have condemned the choice). But perhaps the AMA and the AAMC were simply happy to have one of their own in a position of power. After all, could Price violate the Hippocratic promise to “do no harm”?

Of course he could. Indeed, he seems intent on it.

Price seeks to gut the existing healthcare safety net, as a number of senators asserted at Wednesday’s hearing. A bill he introduced in 2015, for instance, would strip insurance from millions. As a recent article in the New England Journal of Medicine reported, “Price’s replacement proposal would make it much more difficult for low-income Americans to afford health insurance. It would divert federal tax dollars to people who can already buy individual coverage without subsidies and substantially reduce protections for those with preexisting conditions.”

Then again, it’s not fair to pick only on Price; his approach is fully consistent with a larger conservative healthcare reform vision. Oddly, that vision is now being branded by Republicans as a plan for “universal access,” as the New York Times reported. Trump likewise claimed in an interview with the Washington Post that he wanted “insurance for everybody.” Price’s answers at the hearing seem consistent with this pseudo-universalist reorientation. He suggested that the Republican plan would not cut coverage and that “nobody is interested in pulling the rug out from under anybody.”

Indeed, Price was able to score some points as a result of our current lack of a universal system, noting that 20 million Americans remain uninsured and that high deductibles prevent people from receiving care. This is true—and it’s a strong argument for single-payer reform—but it’s also true that GOP designs would only exacerbate these injustices.

Liberals who assert that conservatives lack a coherent healthcare vision of their own are wrong. They have a free market vision of healthcare that, in truth, requires significant public subsidization. For instance, at the hearing, Sen. Todd Young (R-Ind.) praised Mike Pence’s privatized Medicaid expansion in Indiana, a program that was engineered by Trump’s Centers for Medicare and Medicaid Services (CMS) nominee Seema Verma. Price agreed that Pence’s program was “really a best practice I think for many other states to follow.”

The Pence-Verma program created “POWER” (Personal Wellness and Responsibility) accounts for Medicaid participants that are theoretically modeled on health savings accounts (HSAs). HSAs, which are invariably tied to high-deductible insurance plans, have been trumpeted by Trump, by Price and by Paul Ryan’s “Better Way” healthcare plan. In Indiana, the Pence-Verma approach has meant that very low-income individuals are expected to deposit funds on a monthly basis into their POWER accounts. As summarized by the Kaiser Family Foundation: Participants slightly above the poverty line who fail to make payments are kicked out of the program for six months, while those below the poverty line who similarly fail to make such payments are downgraded into a worse version of Medicaid that does not cover vision or dental benefits and imposes copayments on these very poor individuals.

Such spiteful modifications to Medicaid—ostensibly directed to “provide them [participants] with ‘skin in the game,’” as the program’s waiver put it—do not require an act of Congress. They only need the approval of waivers by CMS, which will no doubt be forthcoming with Verma at its head (and with Price above her).

Price, it should be clear, is part and parcel of this larger corporate healthcare advocacy front. He has thrived at the nexus of government and corporate healthcare interests and, at the same time, appears to truly believe in a free market healthcare vision—albeit one that funnels dollars from the government to insurers and pharmaceutical companies, and then back to their investors, like him.

Though the doctor is no doubt an unworthy candidate for health secretary, he is an entirely consistent choice for the incoming Trump administration, and—if not derailed by his stock buys—will be very much at home in the hornet’s nest of free market privatizers, deregulators, ideologues, billionaires, and crony capitalists who will shortly be at the helm of the U.S. government.

Adam Gaffney is a physician and writer with a focus on healthcare politics, policy and history. He is an instructor in medicine at Harvard Medical School and a pulmonary and critical care physician at the Cambridge Health Alliance. His writing has appeared in the New Republic, Los Angeles Review of Books, Salon, CNN.com, USA Today, Jacobin and elsewhere. He’s a board member of Physicians for a National Health Program, a single-payer advocacy organization. The views expressed are his own.