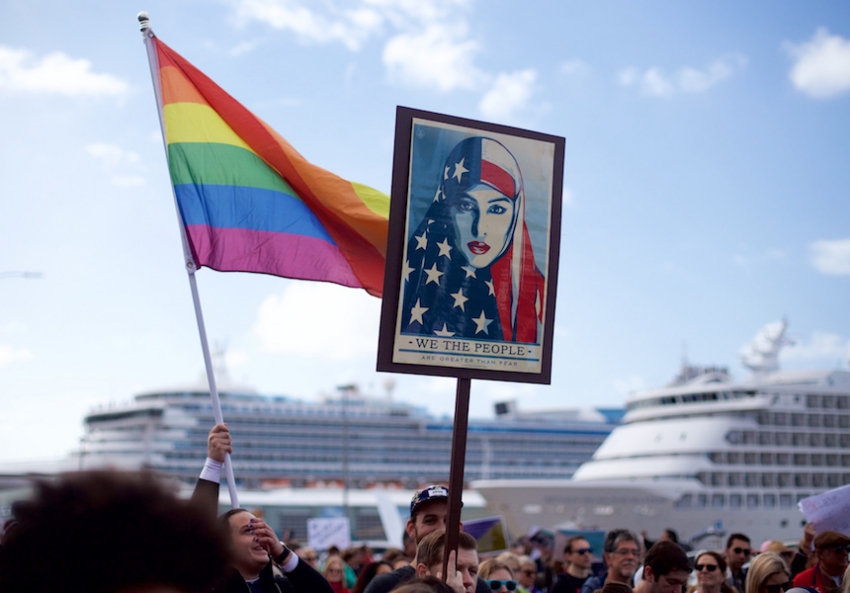 Brooks claims an "alternative patriotism" was missing from the women's march. He is wrong. (Bonzo McGrue / Flickr)

Surprise: David Brooks Is Dead Wrong on the Women’s March

The New York Times columnist used the biggest protests in U.S. history as an excuse for another boilerplate centrist rant.

Where did Brooks come up with the idea these issues were unimportant to the working poor and middle class? Probably where he gets most of his suppositions: directly out of thin air.

David Brooks gets paid extremely well, by an extremely influential media organization, to have extremely banal opinions. This much is known.

What isn’t known is why the New York Times keeps allowing him to publish the same banal opinions over and over again. For the tenth time in as many months, the Times let Brooks (1/24/17)  take a current issue—in this case, the worldwide Women’s March—and jam it into his boilerplate grievance against what he perceives as ineffectual, harmful “identity politics.”

But these marches can never be an effective opposition to Donald Trump.

In the first place, this movement focuses on the wrong issues. Of course, many marchers came with broad anti-Trump agendas, but they were marching under the conventional structure in which the central issues were clear. As the Washington Post reported, they were “reproductive rights, equal pay, affordable healthcare, action on climate change.”

These are all important matters, and they tend to be voting issues for many upper-middle-class voters in university towns and coastal cities.

This is simply untrue. Typical of Brooks’ columns, he makes loaded, self-serving assertions without bothering to cite any basis for them. But doing one’s own homework reveals these claims to be patently bogus. According to one study by the Energy Policy Institute at the University of Chicago and the Associated Press/NORC Center for Public Affairs Research, party affiliation—not income or geographic location—is the main determinate in whether or not you see climate change as an important issue.

While Brooks depicts equal pay as an “upper-middle-class” concern, a 2014 YouGov poll found that those whose families make less than $40,000 a year were about equally likely as those from families making more than $80,000 to perceive men having more opportunities than women at work—46 percent and 45 percent, respectively. Respondents from families in the middle income bracket, $40,000–$80,000, were more likely to see men having an advantage at work, at 53 percent.

On healthcare, there is an association between opinions and income levels, but it works the reverse of the way Brooks suggests: The Pew Research Center (1/13/17) reports that

while about three-quarters of those with family incomes of less than $30,000 per year (74 percent) say the government should ensure coverage, only about half (53 percent) of those with incomes of $75,000 or higher say the same.

So where did Brooks come up with the idea these issues were unimportant to the working poor and middle class? Probably where he gets most of his suppositions: directly out of thin air.

Without the discipline of party politics, social movements devolve into mere feeling, especially in our age of expressive individualism. People march and feel good and think they have accomplished something. They have a social experience with a lot of people and fool themselves into thinking they are members of a coherent and demanding community. Such movements descend to the language of mass therapy.

It’s significant that as marching and movements have risen, the actual power of the parties has collapsed.

How the “actual power of parties” has collapsed is unclear. Is our current president not a Republican? Is he not backed by all but a handful of congressional Republicans? Did party choice Hillary Clinton not get the nomination? What does this even mean?

Brooks thinks people will think they “have accomplished something” simply by marching, but who has claimed that? Like most of Brooks’ targets, it’s a total strawman. Indeed, a central theme of the march’s speakers was parlaying the massive turnout into political action going forward.

On Saturday, the anti-Trump forces could have offered a red, white and blue alternative patriotism, a modern, forward-looking patriotism based on pluralism, dynamism, growth, racial and gender equality and global engagement.

Instead, the marches offered the pink hats, an anti-Trump movement built, oddly, around Planned Parenthood and lots of signs with the word “pussy” in them.

Again, this is a total fabrication. If Brooks actually attended the march (he gives no indication that he did so), he will have seen dozens of appeals to “patriotism,” as well as a specific focus on the racial aspects of gender equality. Whether or not these are good approaches, the fact that Brooks claims things didn’t happen that did happen means Brooks had his screed pre-written, ready to jam in his white male griping for one more post. Which he, per usual, expressly did toward the end of the article, once the topical hook had worn thin (leaning heavily on an anti–identity politics polemic by Columbia professor Mark Lilla, dissected here):

But now progressives seem intent on doubling down on exactly what has doomed them so often. Lilla pointed out that identity politics isolates progressives from the wider country: “The fixation on diversity in our schools and in the press has produced a generation of liberals and progressives narcissistically unaware of conditions outside their self-defined groups, and indifferent to the task of reaching out to Americans in every walk of life.”

Sure enough, if you live in blue America, the marches carpeted your Facebook feed. But the Times’ Julie Bosman was in Niles, Michigan, where many women had never heard of the marches, and if they had, I suspect, they would not have felt at home at one.

Some of the biggest marches were not in “blue America.” Thousands attended marches everywhere from Columbia, South Carolina, to Fargo, North Dakota, to Indianapolis, Indiana, to Salt Lake City, Utah. In deep red Alaska, in temperatures reaching as low as negative 20 degrees, thousands marched in Anchorage and Fairbanks. Thirty-eight marched in Unalakleet, a northwest Alaskan village of 700 people. Adak Island, population 326, had a march of 10.

To the extent they were in “blue areas,” they were so largely because political marches typically require converging on the nearest municipality. But the idea that they were solely the purview of Chardonnay-sniffing East Coast liberals is a canard.

The one example Brooks cites—an anecdotal profile in the New York Times (1/21/16) of a small Michigan town “shrugging off” the marches—led to this scathing rebuttal in Belt Magazine (as in “Dispatches From the Rust Belt”) that interviewed several residents who attended the women’s march ten miles away in South Bend, Indiana, and rejected their characterization by the Times as “uninformed bumpkins.”

He ended the piece with a laughable pop culture non sequitur:

If the anti-Trump forces are to have a chance, they have to offer a better nationalism, with diversity cohering around a central mission, building a nation that balances the dynamism of capitalism with biblical morality.

The march didn’t come close. Hint: The musical Hamilton is a lot closer.

It’s not apparent what this means—that Broadway musicals are a better model for political change than millions of people marching in the streets, which Brooks likens to “mass therapy?” It’s unclear. Because Brooks, despite having one of the most influential spaces in American journalism, keeps writing the same dull polemic every month or so, bothering only to change the topical hook depending on what liberal cause happens to come across his desk.