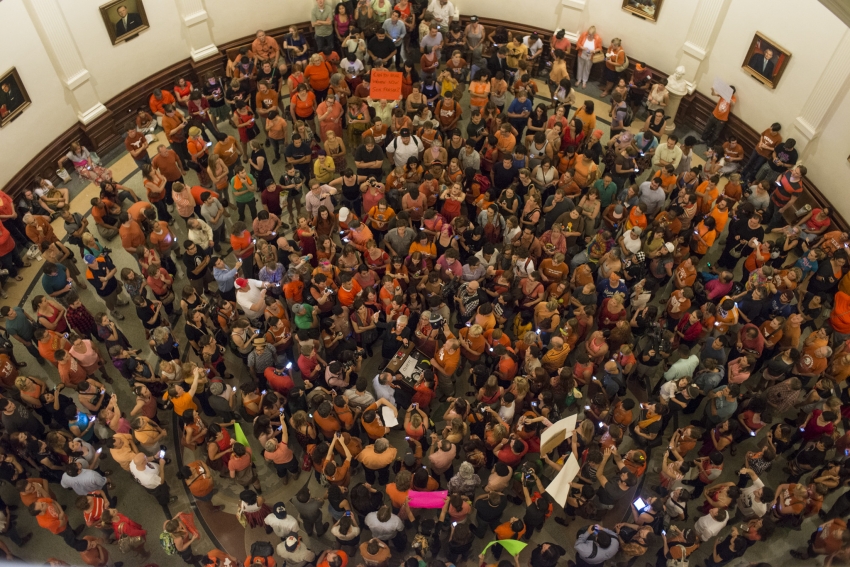 The State Innovation Exchange was founded in 2014 as a progressive answer to ALEC. It works with state legislators in a variety of ways to advance legislation, educate lawmakers and build a progressive power base in the states. (Blackbird Film Co./ Flikr)

Progressives’ answer to ALEC is helping to build power from the ground up.

'For too long, we’ve been very focused at the federal level. And we’re seeing what happens when you put all your eggs in that basket and suddenly the basket breaks.'

Since the 2010 election, in which the GOP won power in a majority of statehouses, progressives have often lamented the influence of the American Legislative Exchange Council (ALEC), which creates template bills that allow legislators to easily replicate right-wing laws across states. It’s been a driving force, for example, in the spread of “right-to-work” legislation as the GOP’s strength in the states continues to grow.

The State Innovation Exchange (SiX) was founded in 2014 as a progressive answer to ALEC. It works with state legislators in a variety of ways to advance legislation, educate lawmakers and build a progressive power base in the states. Last year, staff members met with groups of legislators in about 20 states, to help them establish their policy priorities and understand the issues better. SiX’s priorities include climate change, predatory lending, criminal justice reform, education, election reform, and worker wages and benefits.

Most state legislatures don’t meet year-round, and many legislators have other, full-time jobs. “The rule is that they meet for a few months of they year and get paid a pittance,” says Sam Munger, SiX’s director of strategic engagement. “They have other jobs and little or no staff. That’s one thing that ALEC has really capitalized on. It can show up with a template bill and shove it in someone’s face, and they’re overwhelmed. So they’re very vulnerable to that.”

Munger says that, by “trying to support state legislators and make them better at what they do,” SiX is helping progressives build and reassert power from the ground up. In These Times recently spoke with him about the past, present and future of state-level politics.

We hear a lot about ALEC and all the negative things that are happening in the states. Are there any bright spots?

There are lots of states that are doing good and interesting things, both above and below the radar. Oregon has done quite a bit over the last couple of cycles. It passed modern “motor voter” registration, where people are automatically opted in when they get a license. Another thing that Oregon did—and that other states ought to think about replicating—is that, a few cycles ago, when Democrats were in the minority, some groups formed what they called the “Fair Shot for All” coalition. They identified four or five top policy priorities, like a higher minimum wage, paid sick days and ending police profiling. So it was a concrete set of priorities that cut across a lot of groups. They put a certain amount of resources into talking about it, and when they took the majority, they passed four out of five. And came back the following session and passed an increase in the minimum wage.

Do you work primarily with legislators in Democratic-leaning states, where you probably have a better chance of success?

We get more requests and more enthusiasm, to some degree, from folks in red states than in blue. In some cases, because they are somewhat isolated and are looking for backup. But also, in keeping with some of the broad demographic changes in the country, you see that, even in red states, the major metros tend to be home to rather progressive populations. So, in Oklahoma—which was among the states that voted for [Donald] Trump by the largest margin—Oklahoma City has grown and gotten young, and it’s got a whole set of very progressive people.

And it’s not just that they are progressive, but they’re young, and their energy goes to thinking creatively and constructively about how to both move policy effectively but also how to build for the future. And there are these shifts in a lot of states. Georgia is another one with increasingly diverse and young urban areas. Or North Carolina. It’s a few years ahead, in terms of the demographic shift. But absent gerrymandering, in North Carolina you would see progressives probably in the majority both in the state legislature and in the congressional delegation. In places like Tennessee and Georgia, absent gerrymandering, it would be very close in the legislatures.

The story of the right-wing takeover of state legislatures is often told through the lens of the 2010 election and its aftermath, especially the gerrymandering of districts by the GOP and the Supreme Court’s Citizens United decision. Is there a version of that story that focuses, instead, on what progressives and Democrats failed to do?

I tend to start that story in the 1970s, when ALEC was founded, at a time when Democrats—often quite progressive Democrats—controlled both state legislatures in 37 states, and Republicans controlled five. It was almost the complete inverse of how things are now. There weren’t a lot of conservative national and policy entities. And rich people hadn’t yet organized into a coherent bloc.

The short version is that movement conservatives [begin building a network of institutions, like the Heritage Foundation, Cato Institute, Manhattan Institute and Americans for Prosperity]. And it’s a very long-view effort, which I think we’re very poor at on the Left, especially when it comes to investment. The first time ALEC got together, in 1973 or ‘74, they had about 26 legislators show up. So it’s a very small gathering, and that persists throughout the entire 1970s. On the Left, if an organization put together that kind of track record, donors would lose interest so quickly. Individual donors on the Left, and foundations, don’t want to be the first people into the pool or to fund radical new projects, and they don’t want to stick around. They want to put in a couple years of funding, enough to take credit for whatever good happens, and then bail and go fund something else. And that’s why we have trouble competing.

Anyway, the Chamber of Commerce pumped in about $2 million per year through the 1970s. It’s in the early 1980s, when Ronald Reagan is elected—he had a close relationship with ALEC, and showed up at all their conferences and hired people from there in his administration—that’s when it kind of takes off, and continues to get more and more money. So that when, after 2010, conservatives are actually in control of state legislatures, they have this massive apparatus in the form of ALEC. And you see a huge explosion of terrible ideas spread, instantly, and go from one place to like 38 places, overnight. Because that’s what you can do with a really robust network.

During that period, the Left doesn’t really do anything analogous. One reason is that, from at least the time of the Civil War, states’ rights has been associated with a conservative, racist philosophy. And a basic, background assumption for a lot of progressives is that states are kind of backward, and that good, positive change comes from the federal level. So a lot of our organizing has been at a national level—how the Department of Justice can be more forward thinking or how to make the EPA a more robust entity. We've thought about national level regulation, and assumed that’s the way we would push change forward. And we assumed the states were sort of backwards and conservative controlled entities, even before they really were.

Another piece of it is that the Left is more a coalition movement, made up of a lot of different causes. The Right has its coalition components—social conservatives and corporate conservatives. But it has had a more coherent philosophical identity, about less government and more individual freedom. And that makes it inherently a bit more top down. And also, historically, one of the Left’s strengths has been these strong grassroots movements—civil rights, labor, women’s rights, environmental groups. That’s its strength, but it can make it really fractious. The Right has been smarter about going straight to the levers of power. And I think, frankly, most of that comes from corporations. They got really instrumental and strategic about what they have to do to maximize their profit, and figuring out which level of government will be easiest for them to influence. And with very single-minded purposefulness they’ve driven at it, and they’ve bought the power that they need to buy.

It’s an all-hands-on deck moment when progressive are organizing and rallying to defend and preserve basic democratic norms. How do you make the case that this state-level work is just as important as red alert at the federal level?

In thinking about organizing and being strategic, the history of the long, slow buildup on the Right and the failure of the Left to match that explains the current moment that we’re in. The way the Left had ceded ground in states, and the Right had seeded it—whether you think the Tea Party was a grassroots uprising of angry white folks, or a Koch brothers pseudo-grassroots movement, it was super effective in driving the national debate. And we really had no answer at the state and local level.

In part, it’s about strategy and power building. In part, it’s about reconnecting with our roots. For too long, we’ve been very focused at the federal level. And we’re seeing what happens when you put all your eggs in that basket and suddenly the basket breaks and you have no power base to return to. So, in terms of thinking 20, 30, 40 years out, it’s important to recognize how much power states have. You can see all that damage that’s been done over the past few years—voter suppression, destruction of labor, promotion of fossil fuels—a lot of that has happened at the state level. So I think we need a 20- to 30-year plan to build an effective infrastructure. And in the short run, we have to be in a better position to head off some of the terrible things that the states are doing right now. That’s not to say that people focusing on the federal level are wrong. But Trump won’t be there forever, maybe not even for four years. And the underlying dynamics will continue to be there.