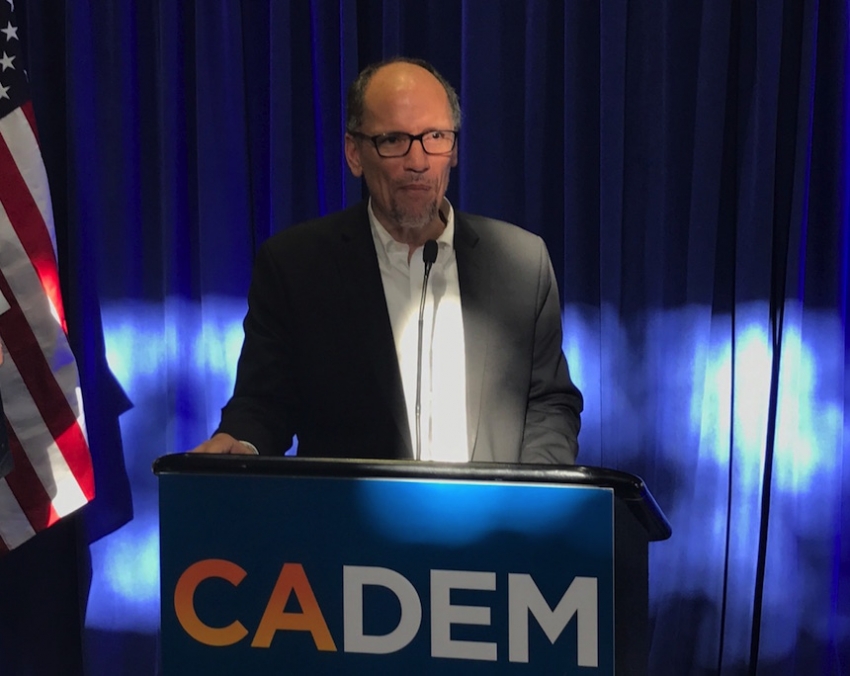 Fault lines in the party were on full display as the California Democratic convention got off to a dramatic start.

"Corporate Democrats are in charge and we won’t stand for it. I’m fighting for the people. We do not have a left party." - Stefanie Hahn, 40, a nurse from Oakland

The first night of the California Democratic Convention got off to a dramatic start when Democratic National Committee Chair Tom Perez’s speech was drowned out by boos and raucous protest.

The commotion started a few minutes before 6p.m. on Friday, as Democrats from around the state gathered in the lobby of the Sacramento Convention Center to await the Chairman’s Welcome Reception, headlined by Perez.

Inside, delegates sipped wine and mingled near small buffet tables. Outside, hundreds of protesters—many of whom were delegates themselves—marched on the plaza within view of the reception area, waving signs that read, “Healthcare is a human right,” “Healthcare not warfare,” and “Single payer NOW.” Chants of “Hey, hey, ho, ho, corporate Dems have got to go!” echoed off the windows and could be heard clearly by delegates gathered inside.

The rally, organized by Campaign for A Healthy California, a coalition working with the California Nurses Association (CNA) to push for statewide single-payer healthcare, spontaneously moved inside as current Democratic State Chair John Burton introduced Perez. Protesters lined the stairwell directly above the stage and packed the balconies, unfurling banners in support of environmental protections and healthcare for all. The DNC chair’s opening remarks were drowned out by boos and screams of “Liar!” and “Hot air!” Burton stood to the side of the stage, clearly distressed by the upheaval.

“We are booing because we feel Perez is part of the establishment that keeps co-opting the progressive movement,” said Gilbert Feliciano, 36, a delegate from North Hollywood who took part in the protest. “The corporatists have an ally with Tom Perez. We felt like it was important to come and voice our discontent.”

“I need you all to help us play defense,” Perez pleaded with the crowd. “This is the most dangerous time of our lifetime.”

The Convention was expected to be contentious, with a deepening divide in the party nationally and a tight race for state chair that many California Democrats see as a timely chance to move the party to the left. Many of the protesters at the reception voiced support for Kimberly Ellis, an organizer backed by Our Revolution (a progressive movement sparked by Bernie Sanders’ campaign) and CNA. Ellis is running against the party’s current vice chair, Eric Bauman, who came under fire last year when it was revealed that his political consulting firm received more than $100,000 from the pharmaceutical industry. Both candidates’ platforms include similar progressive goals, but Ellis is widely seen as a leftist outsider. Her supporters wore bright pink shirts emblazoned with the phrase “UNBOUGHT UNBOSSED,” in a nod to Shirley Chisholm's landmark 1972 presidential campaign.

“I’m supporting Kimberly Ellis because she’s been working with the organizers and activists,” said Feliciano. “It’s one thing to say it, but she’s clearly trying to make some amends.”

Stefanie Hahn, 40, a nurse from Oakland, was one of the loudest voices in the crowd during Perez’s speech. “I think the Democratic Party is a joke,” she tells In These Times. “We’re moving further to the right. Corporate Democrats are in charge and we won’t stand for it. I’m fighting for the people. We do not have a left party. We do not believe in Tom Perez.”

Winona Dimeo-Ediger is a writer specializing in politics, lifestyle and culture. She's based in Sacramento, California.