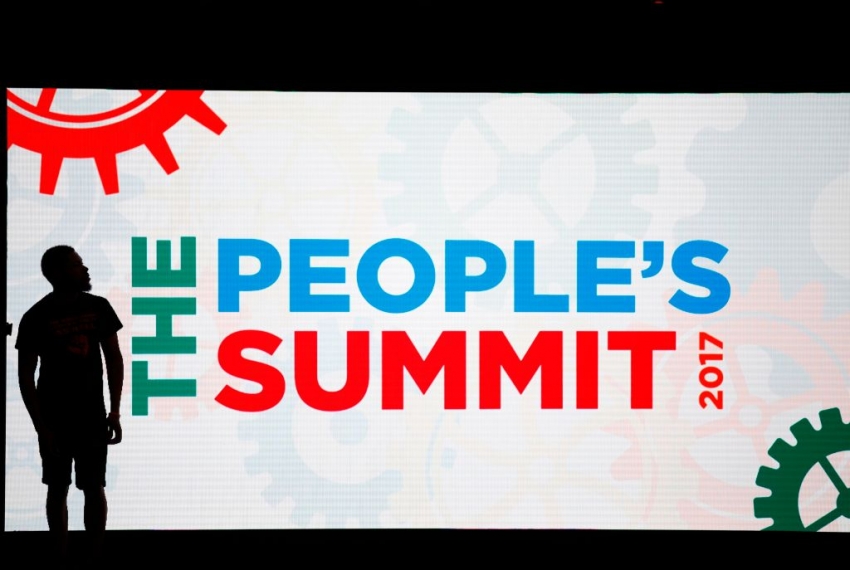 The People’s Summit comes at a time of increasing clarity around progressive goals and, at the same time, deepening skepticism over whether the Democratic Party can become a reliable partner for achieving them. (JIM YOUNG/AFP/Getty Images)

Can Progressives and Democrats Make This Thing Work?

Progressives debate corporate money in politics and the potential for change.

"Trump became president. Anything is possible."

Something remarkable happened at a Saturday session of the People’s Summit in Chicago. Someone took a moment to take a stand for the Democratic Party.

This was long before a heckler cried out about the corruption of the party. It was right around the time a panelist asked how many people in the hall trusted the Democrats, and two hands went up. There were 300 people in the room.

But then Zephyr Teachout interjected that she wanted to “focus on what we can do in practical terms.” Teachout is a law professor who lost to Andrew Cuomo in the Democratic primary for the governor’s race in New York in 2014. She ran for a House seat in 2016, losing to a Republican in the general election.

“I don’t like talking ‘them’ [in reference to] the Democratic Party,” Teachout said. “I am an FDR Democrat. I’m going to fight for this party.”

The session featuring Teachout was about the role of corporate money in politics. The one following it focused on the Democrats. But the session titles could have been switched without losing much in the way of coherence. They are two sides of the same coin: “Solutions to Big Money and Political Corruption” and “Transforming the Democratic Party.”

Teachout’s point wasn’t to defend the Democratic Party as it exists but, instead, a vision of what it once was and might yet be, if progressives can confront and reform the role of corporate influence in U.S. politics. She noted that in 2016, in Congressional races, for the first time “you were more likely to hear from a super PAC than a candidate. That’s a really big deal. That is super PACs replacing candidates and parties. And that happened in the very short space of seven years [since the Supreme Court’s Citizens United decision].

Donald Trump’s rise has accelerated the trends and magnified the fault lines in our politics. The People’s Summit comes at a time of increasing clarity around progressive goals and, at the same time, deepening skepticism over whether the Democratic Party can become a reliable partner for achieving them.

The central goals that progressives have coalesced around include a $15 minimum wage, some version of free higher education or technical college for everyone, single-payer healthcare and campaign-finance reform.

The deepening uncertainty is grounded in the mountain of corporate cash in the political system, and the way it inhibits Democrats, warps their priorities and makes progressive platforms mostly irrelevant to their campaigns.

“What is the vision, the agenda, and the message of the Democratic Party?” asked Pramila Jayapal, a Democratic U.S. House member from Washington’s 7th District. “We have to propose a vision of how we’re going to move the country forward.”

At the summit, in the sessions devoted to ending the role of big money in politics and to transforming the Democratic Party, there were plenty of military metaphors and calls to battle. One speaker said that “there’s never been a more exciting time in America for the awakening of the progressive movement … not rooted in the organization of Democratic Party, but people storming the gates from the outside, and actually taking on big fights.” Another said the effort to reform the way campaigns are financed is “a war for the future of the party.”

The militant language is a spillover from “the resistance” to Trump, and it’s a reflection of the fact that the Left is targeting Democrats just as much as the GOP. That has long been true. What is new, however, and what’s behind the militant language, is the scale of the challenge. Pushing Democrats to the left on policy was once the aim. In the age of Citizens United, the first priority is to transform the entire way our politics is financed, and to do so with a partner—the Democratic Party—that isn’t entirely reliable, to say the least.

At one point, a panelist described the situation by shifting the metaphor away from military language. The Democratic Party “is about what we’re going to do, how are we going to run it,” he said. “It’s a car. Take it over. Use it for yourself.”

It was a nice break from the calls to battle, and as a listener you couldn’t help but to extend the metaphor a little. The road stretches out so far, and it’s so full of potholes and roadblocks. The potential for crashing, or at least running out of gas, seems high.

And yet, in those moments of doubt, the ultimate good news/bad news shock to the system, delivered time and again over the past few months, comes to mind: Trump became president. Anything is possible. You can stand there doubting the vehicle and the plan, or you can get in, take the wheel and get on with it.