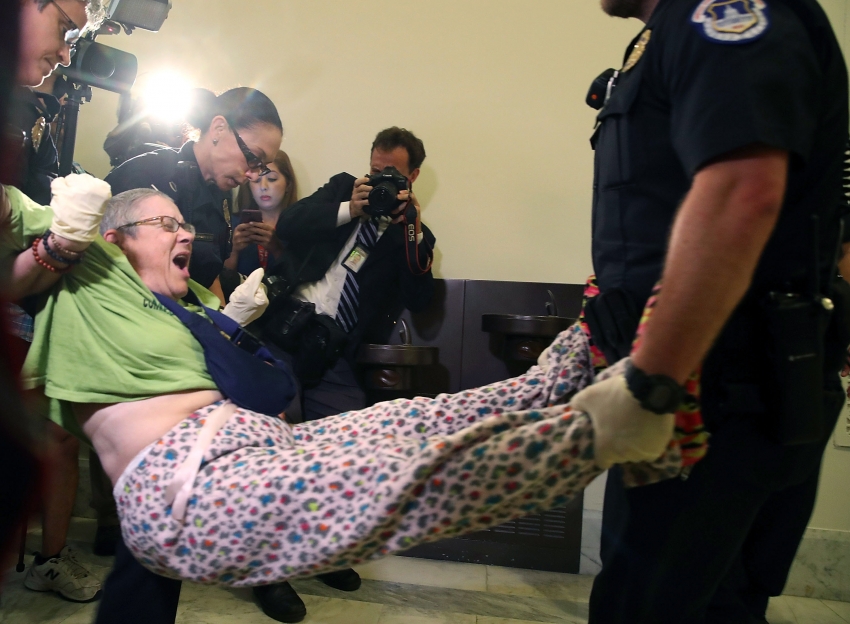 U.S. Capitol Police remove a woman from a protest against the GOP healthcare bill in front of the office of Sen. Mitch McConnell (R-KY). (Photo by Mark Wilson/Getty Images)

The Senate GOP Healthcare Bill Is Lethal for the Poor and Elderly. The Answer Is Medicare-for-All.

The fight against the Senate’s deadly healthcare bill must also include the demand for a single-payer system.

President Donald Trump’s long-promised repeal of Obamacare, or the Affordable Care Act, edges closer to reality, as the Senate releases its secretly written version of the House’s American Health Care Act—the very bill that Trump first championed, then recently reportedly called “mean.” The Republican majority in the Senate is intent on passing the bill before the July Fourth holiday. Obamacare has led to tens of millions of Americans getting at least some health insurance, but it has problems of its own. Since health care represents one-sixth of the U.S. economy, the political debate between the very bad Republican bill and the less bad Obamacare may create an opening for the sensible solution enjoyed in just about every developed nation outside the US: single-payer health care.

Single-payer is already in practice in the U.S., and is immensely popular. It’s called Medicare, the taxpayer-funded program that guarantees health care for seniors and people with permanent disabilities. Public polling soon after World War II showed widespread support for the proposal; Medicare became law in 1965. Trump, in his notorious June 2015 campaign announcement in which he attacked Mexicans as “rapists,” also promised: “Save Medicare, Medicaid and Social Security without cuts. Have to do it.”

If the current bill continues on its trajectory and gets passed, Donald Trump will have to decide if he is going to break that promise. While the bill has to first pass the Senate and then go through a process in which the Senate and House bills are reconciled, it will, at the very least, massively cut Medicaid.

The reason why many opponents call Trumpcare “wealth care not health care” is the elimination of an Obamacare tax on the wealthiest Americans. They’ll get a tax cut, while tens of millions will lose insurance. Others will remain unable to afford it, or will be forced to buy hollow plans that offer minimal coverage, or plans with enormous deductibles and copays. People with so-called pre-existing conditions will find themselves virtually uninsurable in most states. A recent study by the Kaiser Family Foundation estimates that there are over 52 million non-elderly people with pre-existing conditions. Kaiser specifies “non-elderly,” as the elderly, covered by Medicare, can’t be excluded because of pre-existing conditions.

Currently, 57 million seniors and people with disabilities are on Medicare, out of a U.S. population of 320 million. There is no rational reason why Medicare couldn’t be expanded to cover all Americans, regardless of age, from birth to death. This is what single-payer health care advocates call “Medicare for All.”

Medicare for All would maintain the current system of private and nonprofit hospitals, doctor offices and all the other familiar aspects of the U.S. health system. The single most important difference is that health insurance companies as we know them would cease to exist. Insurance companies don’t actually deliver health care. They act as administrators, processing bills, making unconscionable profits off people’s pain and paying enormous executive salaries. The savings would be extraordinary, and the system would most likely be as popular as Medicare is today.

There are hopeful signs for single-payer. Representative John Conyers, the longest-serving member of Congress (he’s been in office since 1965, the year Medicare launched), has put forth H.R. 676, the Expanded & Improved Medicare for All Act. It currently has a remarkable 112 co-sponsors (all Democrats). Since the Republican majorities in both houses are unlikely to support this bill, activists are taking the fight to the states. The Healthy California Act, SB 562, would cover all residents of California, and has already passed the state Senate there. The Democratic-controlled Assembly is considering it now. In New York state, a similar bill has passed the Assembly and will be debated in the state Senate, where Republicans control the chamber by one vote.

Behind all the legislation is a diverse and growing grass-roots movement. National groups have been working on it for years, including Healthcare-NOW!, Physicians for a National Health Program and unions like National Nurses United. Statewide coalitions educate, organize, lobby and pressure lawmakers, and prominent politicians like Bernie Sanders rally the troops, building momentum.

Canada’s Medicare system, which covers all residents, started in the rural province of Saskatchewan and then went national. As Trumpcare versus Obamacare dominates the cable news channels, the unreported movement for single-payer health care grows. As with all great shifts in history, when the people lead, the leaders follow.