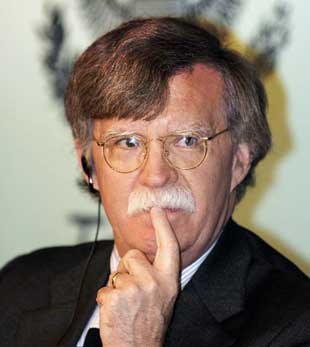 Senate Foreign Relations Chair Richard Lugar (R-Ind.) scheduled hearings for April 7 on the confirmation of John Bolton as the U.S. Ambassador to the United Nations.

Lugar signaled that he is less than ecstatic over the nomination, telling the Washington Post that he was “going to reserve any comments about the appropriateness or not of the president’s choice.” (In 1999, Lugar showed less restraint, hailing President Clinton’s choice, Richard Holbrooke, as “an excellent nominee.”) More explicit was Sen. Chuck Hagel (R-Neb.), who said, “I do have concerns, because the United Nations is a very important institution. We need to send someone to the U.N. that has the skills to work with the secretary-general.” But five days later, after a visit by Bolton, Hagel changed his mind and declared he would support the nomination.

Bolton’s appointment clearly makes a mockery of the kiss and make-up European tour of George W. Bush and Condoleezza Rice. Along with Bush’s nomination of Paul Wolfowitz to head the World Bank, the president’s choice of Bolton reveals the skull beneath the skin of administration foreign policy. Appointing someone who has repeatedly gone on the record saying that the United Nations should not exist—or that, at least, the United States should not be part of it—is hardly a diplomatic response to the crucial discussions currently taking place on reforming the organization.

Bolton has publicly dismissed international law and treaties, since they may inhibit American freedom of action. In 1997, he wrote in the Wall Street Journal, “Treaties are ‘law’ only for U.S. domestic purposes. In their international operations, treaties are simply ‘political’ obligations.”

Five years ago, he accused U.N. Secretary General Kofi Annan of a power grab; now he’s supposed to work with him on U.N. reform, and seek cooperation from him for help in extracting the United States from Iraq. Bolton’s other hobby horses include opposition to the International Criminal Court (“a product of fuzzy-minded romanticism [that] is not just naive, but dangerous”), and the conventions on landmines, small arms trade and child soldiers. He also opposes the nuclear test ban treaty—except when it applies to Koreans, Iranians and the like.

With the appointment of Bolton, the rest of the world will now see American foreign policy as it really is, without the smooth interface of Colin Powell, who so often performed on the world stage as a good cop in a bad cop administration.

In addition to dealing with the dubiously multilateral position of the Rice State Department, and coping with the neocon imperialist fantasies of Wolfowitz at the World Bank, foreign diplomats will be faced with the noisily unilateral Bolton.

Despite having spent time at neoconservative think tanks and groups like the American Enterprise Institute and the Project for a New American Century, there is nothing neo about Bolton’s conservatism. As befits a former U.N.-basher for the Heritage Foundation, Bolton’s roots are in an old, nativist and deeply reactionary tradition, as suggested by his closeness to his longtime patron, former Sen. Jesse Helms (R-N.C.). Woolly neoliberal idealism about exporting democracy isn’t his style, as he demonstrated when as part of the Bush legal team he strode into a library in Florida in 2000 and announced, “I’m here to stop the vote.”

Fringe groups have long seen the United Nations as an instrument of a foreign conspiracy to take over the United States. Their strident views have, like so many conservative inanities, now become mainstream. Bolton’s nomination is just the culmination of this process. “Move America Forward,” which describes itself as “the organization leading the effort to evict the United Nations from American soil and halt American funding of the U.N.,” has announced it will lobby the Senate and “rally public support for John Bolton’s nomination.”

The only effective counter to this agenda will be senators brave enough to stand up and say that this country and the world are better served by a functioning United Nations, which does indeed have a primary role in avoiding world conflicts.

In the preamble to the Declaration of Independence, its drafters cited “a decent Respect to the Opinions of Mankind,” to explain what they were doing. The nomination hearing allows the Democrats and the sane Republicans to show a similar respect, not just to the opinions of mankind, but to the majority of American men and women who have profound reservations about John Bolton.

Ian Williams is the author of Deserter: Bush’s War on Military Families, Veterans and His Past, now available from Nation Books.