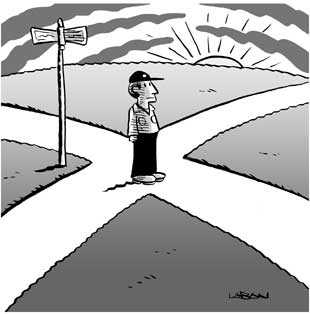 Which Comes First: Growth or Clout?

At the spring meeting of the AFL-CIO executive council in Las Vegas, debate over this long-standing strategic conundrum took center stage, where it will remain until the federation’s potentially tumultuous July convention. But posing the question this way oversimplifies undercurrents of the conflict that are rooted in personalities, institutional power and unions’ different experiences in different industries.

Sweeney has responded with his own plan that partly addresses Stern’s challenges—and has been derided as “Stern lite”—but puts more emphasis on politics. Sweeney came out on top at Las Vegas, when the Executive Committee—an advisory group of top labor leaders without formal power—voted 15 to 7 to reject a Teamsters’ proposal that would have rebated half of AFL-CIO dues payments back to affiliated unions that spend 10 percent of their budgets, and at least $2 million a year, on organizing. The committee endorsed Sweeney’s proposal to allocate half of the dues paid to the AFL-CIO for political work. The unions favoring the Teamster proposal, and who claim to represent 40 percent of federation members, vowed to fight on.

Labor leaders agree, at least rhetorically, that the AFL-CIO should focus equally on politics and organizing, priorities that John Wilhelm, then president of HERE and now a potential challenger to Sweeney, forcefully promoted five years ago. But within the AFL-CIO there are clear differences of emphasis. For example, some manufacturing unions feel that global pressures overwhelm them. “We have lost 3 million industrial jobs in the last four years,” said Steelworkers President Leo Girard. Without new public policies, he said, “we can’t put enough money into organizing at that rate to organize 3 million workers.”

Ironically, Sweeney came to power 10 years ago arguing that it was possible to organize without waiting for policy changes. But despite increased efforts by the AFL-CIO and a growing number of unions, the union share of the workforce has continued to decline. Now, with a shift in emphasis, Sweeney argues, “we can’t wait until we organize millions of workers to have a stronger political program.

AFSCME, which represents state, county, and municipal employees, agrees, arguing that neutralizing employer opposition is one of the few proven strategies for organizing success. Unions can use state and local legislation as bargaining and comprehensive pressure campaigns to reduce employer opposition.

In response, the unions backing the Teamster proposal argued in a joint statement that “a massive shift in resources and focus to organizing and growth in our unions’ core industries and sectors is the only path to rebuilding worker power both in the workplace and in the political process.”

They advocate restructuring unions through mergers in order to facilitate larger-scale organizing within particular sectors. While there is little support for Stern’s original proposal to give the AFL-CIO the power to require mergers, the rebate proposal is designed to financially pressure smaller unions to merge. The proposal also aims to radically shake up the AFL-CIO by cutting its budget and creating a movement to challenge Sweeney’s leadership.

Like Sweeney, the challengers also think the AFL-CIO must be active politically, but rather than proposing an increased budget, they advocate a change in strategy. Wilhelm, for example, argues that labor must be more independent of the Democratic Party, both supporting friendly Republicans and mounting primary challenges to unreliable Democrats. Both challengers like Stern and Sweeney and supporters such as Firefighters President Harold Schaitberger have also argued that labor must build ties to Republicans in an era of Republican dominance.

Occasionally, Republicans do strike deals favoring unions. For example, California Gov. Arnold Schwarzenegger and New York Gov. George Pataki both set favorable conditions for UNITE/HERE organizing Indian casinos. But as a matter of strategy, supporting Republicans who are otherwise hostile to labor is very different from working with other progressives to support pro-labor, progressive challengers to wayward Democrats in party primaries.

Though each side insists its proposal is about a vision for the labor movement, much of the debate has focused on budget priorities. Sweeney proposes increasing AFL-CIO political spending by about 30 percent and providing little or no increase to organizing. Instead, Sweeney would replace the current organizing support fund with $15 million in rebates of AFL-CIO dues to a few unions that meet higher standards than the Teamster plan—spending 30 percent (rather than 10 percent) of their national budgets and providing proof of strategic, well-staffed organizing projects.

There are problems with both rebate plans. They provide a relatively small amount of money, as most individual unions already fall far short of the agreed goal of devoting 30 percent of national budgets to organizing. The Teamsters’ more generous plan would reallocate less than one percent of the labor movement’s total resources to organizing and probably do little to leverage more spending from unions. But it’s also not clear whether the higher standards and smaller rebate fund in the Sweeney plan encourage more spending or simply reward unions already most committed to organizing.

Beyond the budget battle, the two sides take different approaches on how to encourage unions to focus on their core constituencies, how to reduce unproductive competition and how to stop unions from undercutting contract standards. The current competition between SEIU and AFSCME to organize 49,000 home-based childcare workers in Illinois illustrates how thorny this issue can be. At the Executive Council meeting in Las Vegas, Stern openly criticized AFSCME President Gerald McEntee for attempting to organize these workers, whom SEIU began organizing 10 years ago.

Defending his union’s involvement, McEntee says that AFSCME is a leader in organizing childcare workers nationally and considers them a core industry. AFSCME says it found an interest in unionization among Illinois workers when it began approaching them last fall as part of its election-year political strategy. Moreover, Illinois AFSCME charges that SEIU locals had previously undercut standards for public employees in the contracts it negotiated, including one covering home healthcare workers. AFSCME contends that a troublesome precedent was set when the governor’s executive order granting bargaining rights excluded home healthcare workers from the health and pension plans that cover other state workers.

SEIU, which represents home healthcare workers in Illinois and other states, argues that it pioneered the organization of such low-wage contingent workers, won executive orders granting bargaining rights and has over many years significantly improved both working conditions and pay for home healthcare workers.

Although SEIU was previously able to use the AFL-CIO jurisdictional dispute mechanism to prohibit AFSCME from competing to organize home healthcare workers, it has not used the same procedure in this case. “Now the focus is on the 42-day process” of the mail-in ballot election, SEIU Communications Director Ben Boyd says. “It’s a Democratic process that will allow 29,000 workers to be heard and hopefully come into this movement.” Both unions are on the ballot, each having around 10,000 signed membership cards certified by the independent election officials.

The two unions also have had a troubled—sometimes cooperative, sometimes conflictual—relationship in several other states on organizing both home childcare and healthcare workers. Although both sides in the dispute over the structure and strategy for the AFL-CIO agree that resolving such conflicts is important for the labor movement, ultimately neither mergers into bigger unions nor improved arbitration methods are any substitute for the individual unions reaching agreement on common strategy.

Union leaders at the executive council meeting did find common ground around dramatic proposals to strengthen state labor federations and central labor councils. And other unifying ideas were floated, such as sharing union members who volunteer as part-time or temporary organizers among different unions within the same geographic area.

Yet, as many unionists sadly anticipate and fear a potential departure of SEIU from the AFL-CIO at the national convention this summer, or some other wrenching fracture, labor seems far from forging the common strategy it desperately needs.