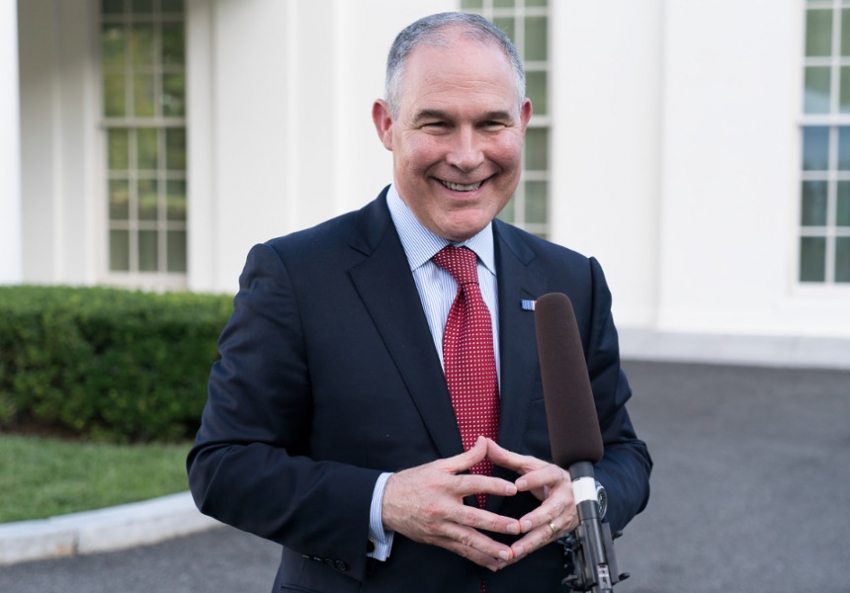 EPA administrator Scott Pruitt has a clear double standard when it comes to conflicts of interest. (The White House)

Pruitt Is Removing Science Advisers Who Have Received EPA Funding, But He’s OK With Industry Funding

The EPA administrator called for scientific independence while drowning in fossil fuel money.

Rep. Lamar Smith argued that “For eight years, the EPA has had science boards filled with members who have had conflicts of interest." Smith’s reelection campaign has received $52,950 from the fossil fuel industry just since the start of 2017.

After news broke that eight science advisers to the Environmental Protection Agency would be dismissed, EPA Administrator Scott Pruitt today held a press conference announcing a new directive for the agency wherein scientists who receive grants from the EPA will not be able to serve on its Federal Advisory Committees.

The decision was framed as one meant to encourage more independence in agency counsel and oversight. “When we have members of those committees that have received tens of millions of dollars in [EPA-funded] grants at the same time that they’re advising this agency on rule-making, that is not good and that’s not right,” Pruitt said in a brief press conference to which no reporters were invited. According to Pruitt, members of three of the EPA’s science advisory bodies—the Scientific Advisory Board, the Clean Air Science Advisory Committee and the Board of Scientific Counselors—have received, between them, $77 million in EPA-funded grants in the past three years.

“We want to be sure that there is integrity in the process,” he added, “and that the scientists that are advising us are doing so with not any type of appearance of conflict.” The Washington Post reported today that it has obtained a draft list of which advisors could replace those ousted under the new rule—and it’s clear that to Pruitt, not all appearances of conflict are cause for concern. The list includes representative from the industries the EPA regulates and reliable critics of environmental regulation. Several work for major oil companies and electric utilities.

For an administrator with such deep ties to the fossil fuel industry—one of the main sectors the EPA is charged with regulating—independence is a tall order. Pruitt and multiple of the lawmakers who joined him on stage this afternoon have collected well over six figures each from oil and gas companies that stand to benefit from regulatory rollbacks.

Pruitt’s election campaigns for the Oklahoma Attorney General office received $265,000 from the energy sector between 2010 and 2014. The co-chair of his 2014 election campaign was an oil company CEO, Harold Hamm.

As head of the Republican Attorney General Association (RAGA)—a champion of anti-regulatory action—Pruitt helped the group rake in $530,000 from Koch Industries, $350,000 from Murray Energy, $160,000 from ExxonMobil and $125,000 from Devon Energy. In total, Rolling Stone’s Jeff Goodell notes in an extensive story on Pruitt’s corporate ties, RAGA has taken in $2.25 million from the fossil fuel industry since 2005 alone.

Rep. Lamar Smith (R-Texas) praised the directive in today’s press conference, arguing that “For eight years, the EPA has had science boards filled with members who have had conflicts of interest. … It is impossible for these boards to be fair and balanced in their advice and their decisions when many board members are receiving grants and funds from the EPA itself.”

Smith’s reelection campaign has received $52,950 from the fossil fuel industry just since the start of 2017, more than from any other industry. Over the course of his career, his campaigns have received a total of more than $759,000 from oil and gas companies. In his role as chairman of the House Science, Space and Technology committee, Smith has also led a charge against Democratic Attorneys General’s investigations into whether ExxonMobil misled the public about the existence of climate change. The committee has issued subpoenas to the AG offices involved along with several environmental groups.

Also speaking today was Oklahoma Sen. Jim Inhofe, whose Senate seat, many have speculated, Pruitt could have his eye on if Inhofe retires in 2020. Inhofe is perhaps best remembered for tossing a snowball onto the floor of the Senate to disprove the existence of global warming. Since 2013, Inhofe’s campaigns have received $324,400 from the oil and gas industry, including more than $20,000 each from ExxonMobil and Murray Energy. He’s received more than $1.82 million from those sectors since the start of his political career, plus $593,317 from electric utilities.

“As we engage in rule-making here at the agency,” Pruitt concluded before signing the order, “our focus should be sound science, not political science.”