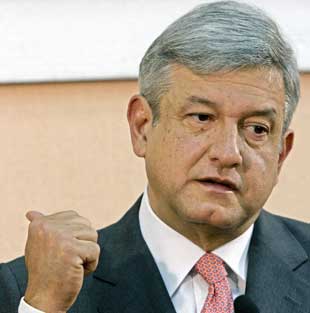 The Ousting of Obrador

Mexico City mayor Andres Manuel Lopez Obrador, otherwise known as AMLO or “el peje” after a lovable swamp fish, appears to be the most popular Mexican politician in recent history.

Although he only officially announced his intention to run for president in early April, for the past few years he has been leading in the polls, currently by about 8 percentage points. Disenchantment with President Vicente Fox and his National Action Party (PAN) is high, and many voters have been won over by Obrador’s populist programs, including monthly $60 (600 peso) stipends for the elderly and investment in schools, public transportation and healthcare for the poor.

The last thing the PAN and the Institutional Revolutionary Party (PRI), which ruled for 71 years before Fox’s win, want to see is a victory by Obrador and the moderate left Democratic Revolutionary Party (PRD). In 1988, the PRI essentially stole the presidential election from PRD candidate Cuauhtemoc Cardenas through tactics that included burned ballots, ballot boxes dumped in rivers and supposed computer malfunctions. This time around, the Mexican establishment is taking a different approach, trying to keep Obrador from ever getting on the ballot.

In 2001, developers of upscale properties in the El Encino neighborhood of Mexico City obtained a court injunction demanding the city government stop building a road skirting their development. They allege that Obrador failed to halt construction immediately; Obrador says he didn’t know of the order until later. Once construction stopped, the developers also allege that the city government blocked access to their land by leaving construction equipment at the site, and asked that contempt of court charges be filed against Obrador and his administration.

Both parties have led the campaign to strip Obrador of his official immunity from prosecution (known as the fuero) so that he can be prosecuted on contempt-of-court charges stemming from the dispute. With the success of the desafuero (as the governmental effort to clear the way for Obrador’s prosecution is known), he could face eight years in prison. More significantly for his candidacy, under Mexican law he cannot run for office if facing criminal charges.

On April 7, only hours after he announced his presidency at a rally of more than 100,000 supporters, Mexico’s Congress voted to strip Obrador of his immunity. Anticipating the vote’s outcome, Obrador told supporters, “I am proud to be accused, like those who struggled for justice in the past.” He also announced that he would turn himself in to authorities, refuse bail and represent himself in court.

“He’s being accused of an extremely technical violation of Mexican law,” says journalist David Bacon, author of the book The Children of NAFTA. “Under any normal circumstances, this would never even make it to court, but Fox is trying to keep him off the ballot in 2006.”

The effort to prosecute Obrador has been going on for some time, and seems to have only increased his popularity with a population fed up by broken promises and corruption from their government.

“He is such a smart guy, everything they [the PAN] do to discredit him backfires,” says Jorge Mujica, secretary-general of the PRD in Illinois and a Mexico City native. “Everyone who speaks out against him ends up having to defend themselves.”

On August 29, 2004, thousands took to the streets in Mexico City to protest against the desafuero. Obrador called for more demonstrations and the public appears ready to defend him. Polls show that 80 percent of Mexico City residents disagree with the desafuero. Chiapas rebel leader Subcomandante Marcos called on the Zapatistas to support the protests, even though they don’t endorse Obrador’s candidacy since they don’t participate in electoral politics. In July 2004, students and professors at the National Autonomous University (UNAM) in Mexico City founded a nationwide Network of Youth for AMLO, which now has groups in at least 12 states.

In light of Fox’s corruption and alliance with the PRI, youth network leader Alberto Martinez says, “The youth is focusing its vote on Lopez Obrador. The Mexican youth will be who puts him in the presidential seat in 2006.”

The other leading presidential contenders appear to be PRI president Roberto Madrazo and PAN Interior Secretary Santiago Creel. Fox isn’t allowed to run again, and an earlier move by his wife to run proved unpopular. Neither Madrazo nor Creel match Obrador’s popularity.

“If the elections were today, Lopez Obrador would win hands down,” says Tom Hansen, director of the Mexico Solidarity Network and a doctoral student in Mexico City.

In an appearance before foreign press in February, Obrador accused Fox and his administration, as well as ex-president Carlos Salinas, of conspiring to prevent his candidacy. Besides the effort to put him in jail, he also blamed them for orchestrating the release of videos showing businessman Carlos Ahumada, now in jail for fraud, making payoffs to two officials from Obrador’s administration. During a press conference with Mexican reporters in late March, Obrador professed confidence, saying he would wait and reflect on the situation and urged them to enjoy the Holy Week leading up to the congressional vote.

Many see Obrador’s popularity and potential presidency as part of the rise of the left in Latin America. With Hugo Chávez in Venezuela, Néstor Kirchner in Argentina, Luis Inacio “Lula” da Silva in Brazil and Tabaré Vázquez in Uruguay in office, moves are under way to create a Latin American trade bloc that could counter U.S. economic hegemony and promote large scale social programs for the masses living in poverty.

“What’s fueling the rise of the left is neoliberalism,” Bacon says. “What the International Monetary Fund and World Bank have been doing over the past two decades has resulted in a falling standard of living, and the political parties which have imposed these policies are seeing a shrinking support base. That’s what happened in Argentina, Brazil, Ecuador and Venezuela, and that same crisis is evident in Mexico. The ability of the PAN to get someone elected is shrinking every day. No wonder they’re going after Obrador.”

Obrador is a relative moderate compared to Chávez and Cuban president Fidel Castro, and most analysts don’t expect him to make too many waves with the United States.

“Mexico is already locked into NAFTA, and I doubt Lopez Obrador would renegotiate it,” says Hansen. “It will be a minor shift globally but not a major shift. Subcomadante Marcos describes Lopez Obrador as the ‘left hand of the right wing,’ which I think is an apt description. The best we can probably hope for under him is cleaner government and less of a move toward privatization of current government entities like electricity and oil.”

“He’s a social reformer but not a revolutionary,” adds Mujica. “He’s done a lot of work nationally to convince the private sector that he would work with them.”

One of Obrador’s staunchest supporters has been wealthy businessman Carlos Slim, who helped fund the revitalization of Mexico City. The structural and administrative improvements Obrador has made in the city as well as his programs to aid the poor characterize the pragmatic approach that has made him popular.

“When I wander around Mexico City at 3:00 or 4:00 in the morning now, the main people you see out are cleaning the streets,” says Mujica. “He’s transformed the downtown. He’s gained a public perception of being a guy who gets things done. Not with PRI style or PAN style. This is an alternative chance to build another Mexico.”