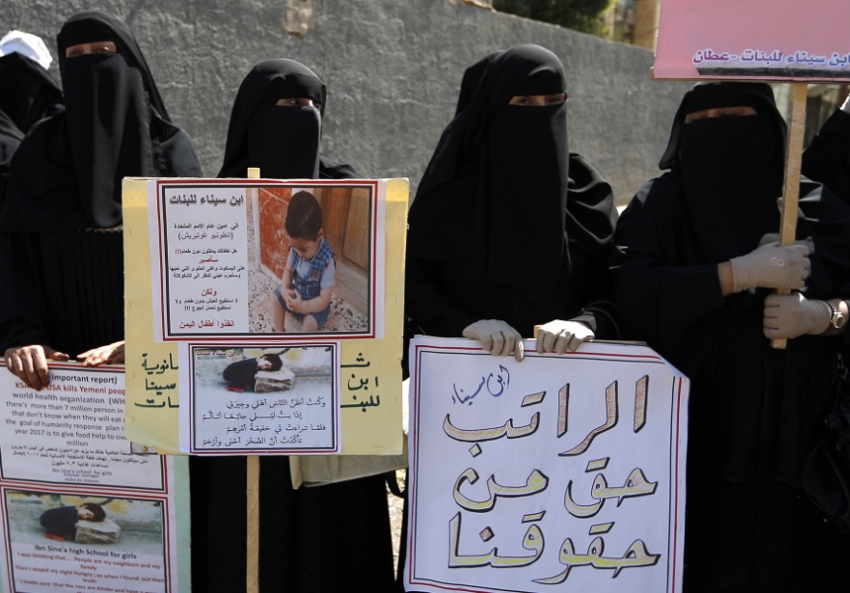 Yemeni teachers protest against the ongoing conflict and the suspension of their salaries, outside the UN offices in Sanaa, on October 3. The Arabic writing reads: "Receiving our salaries is a basic right." (Mohammed Huwais / AFP / Getty Images)

Yemenis believe the Saudis would not have dared to fight them without American support and consent.

SANAA, YEMEN—Two years of the U.S.-backed Saudi war in Yemen has caused a disastrous humanitarian situation in the poorest Arab country. The conflict is increasingly stoking anti-American sentiment among Yemenis, many of whom see the U.S. government as a killer using Saudi hands.

The conflict began in 2015, when President Abed Rabbo Mansour Hadi resigned and went into exile, and Saudi Arabia led an armed coalition allegedly to restore Hadi’s legitimacy. Hadi now leads a government-in-exile while the rebel Houthi movement surges in Yemen.

According to the UN, around 13,500 civilians were killed in the conflict between March 2015 and June 2017. The UN Humanitarian Coordinator for Yemen, Jamie McGoldrick, tells In These Times that the UN has not been able to regularly update its figures due to lack of documentation. Local human rights groups say the number might be several times higher, especially when you include the impacts of the blockade and a recent cholera outbreak, made much worse by Saudi bombings of health clinics and other effects of the war.

Abdullah Allaw, chairman of a local human rights observatory, the Middle East Foundation for Development and Human Rights, gives In These Times a much higher number for the total death toll, due to direct and indirect consequences of the conflict. “From our active volunteers working all over the country in rural, urban and suburban areas, we have documents showing that 500,000 Yemenis died because of aggression over the last two years,” mainly of disease and malnutrition, he says.

About a million government employees have received little to no salary over the past year, in part because the Hadi government moved the bank.

Before the war, the country imported 90 percent of its food and nearly all of its medicine. Now, because of the blockade, Yemenis cannot easily receive these or other essential items, such as fuel.

More than 55 percent of the country's health facilities are destroyed or only partly functioning due to Saudi airstrikes, and the closure of the Sanaa airport thanks to coalition-imposed airspace restrictions has made it more difficult to access other healthcare. “Tens of thousands of Yemenis cannot go abroad for medical treatments or any other civil purposes, and many more cannot even come back home,” said Minister of Transportation Zakaria Al Shami.

“The closure of Sanaa airport is … a flagrant violation of all international laws, humanitarian laws, human rights laws.”

Many families are having to make do with less. “We now buy 90 percent less food and other essential things than we did before this war,” says government employee Raghad Ahmed, who supports six children on her and her husband’s salaries.

“We have not received salaries for six months now, we do not have any other income and our savings are near zero, despite the fact that we have only 2 meals per day,” she told In These Times earlier this year.

Water access is also now a problem for all of the lower class and most of the middle class in Sanaa, as water has become more expensive because of the rise of fuel prices due to the Saudi blockade. They receive water only from local charities that installed water tanks in almost every neighborhood. “If these [charities] did not bring us this water, we would have died of thirst by now,” says Um Ibrahim, mother of five, whose husband is a construction worker.

Her 13-year-old son Ibrahim and his father Ahmed stay 24 hours at the site of an under-construction building to support their family. Ibrahim helps his father by watching the site and equipment when workers are not there.

“The war killed us all, my kids don't go to school anymore. I need Ibrahim to help me,” Ahmed says.

Yemenis know that most of the Saudi weapons are U.S.-made: Abrams tanks, Bradley vehicles and some cluster bombs, not to mention the F-16 and F-15 fighter jets that fly over their heads around the clock.

As a result, anti-American sentiment is on the rise. Yemenis have repeatedly taken to the streets chanting against the United States. Many of those who have lost friends and family to Saudi airstrikes show more hatred toward the United States than toward Saudi Arabia. They believe the Saudis would not have dared to fight them without American support and consent.

So activists have organized a nationwide campaign using the slogan, “The U.S. kills Yemeni people,” hoping to embarrass the United States before the world.

“We made this campaign because the Saudi war was declared against us from Washington, not from Riyadh,” says Mohammed Haidra, who coordinates the campaign.

The U.S. has not only turned the Yemeni people against it, but has also been supporting its enemies, al-Qaeda and ISIS, by supporting the Saudi Wahhabi regime which provides the ideological basis of these terrorist groups. These groups are also exploiting the chaos to further expand and recruit.

Multiple members of the exiled Hadi government are designated by the U.S. Treasury Department as global terrorists and commanders of groups labeled as terrorists.

Some of these men are senior officials and hold posts in Hadi’s Saudi-backed government-in-exile, and some of them are field commanders fighting in Yemen with Saudi forces against Houthis.

Nayif Salih Salim al-Qaisy, for instance, was appointed by Hadi in 2015 as a governor of al-Baida, an al-Qaeda stronghold. As a senior member of the Hadi government, al-Qaisy receives political and financial support from the Saudis—and he also sends money and weapons to al-Qaeda in Baiha.

In the meantime, al-Qaeda and ISIS continue to grow. For instance, this January, al-Qaeda fought off the Houthis for control over Taiz, which is the capital of the most populous province in Yemen with around 3 million people.

But many Yemeni people remain ready to fight back against the al-Qaeda, Saudi Arabia and their U.S. backers. “I and all my sons would go and fight Saudis, killers of our people, and I would call every Yemeni to take gun and go defend our country,” said Mohammed Rubaid January 25. He was speaking to thousands of people who had gathered in Sanaa to commemorate his brother, Judge Yahya Rubaid, who was killed by a Saudi airstrike asleep in his house with his wife and seven children one year before, on Jan. 25th, 2016.

“We must defend ourselves from such crimes and such Saudi tyranny and brutality.”

Some of the material in this piece has been adapted with permission from the author's website.

Nasser Arrabyee is a Yemeni journalist and filmmaker based in Sanaa, Yemen. He is founder and current president of media production company Yemen Alaan.